And, just like JB's new song, it was feat. Quavo! 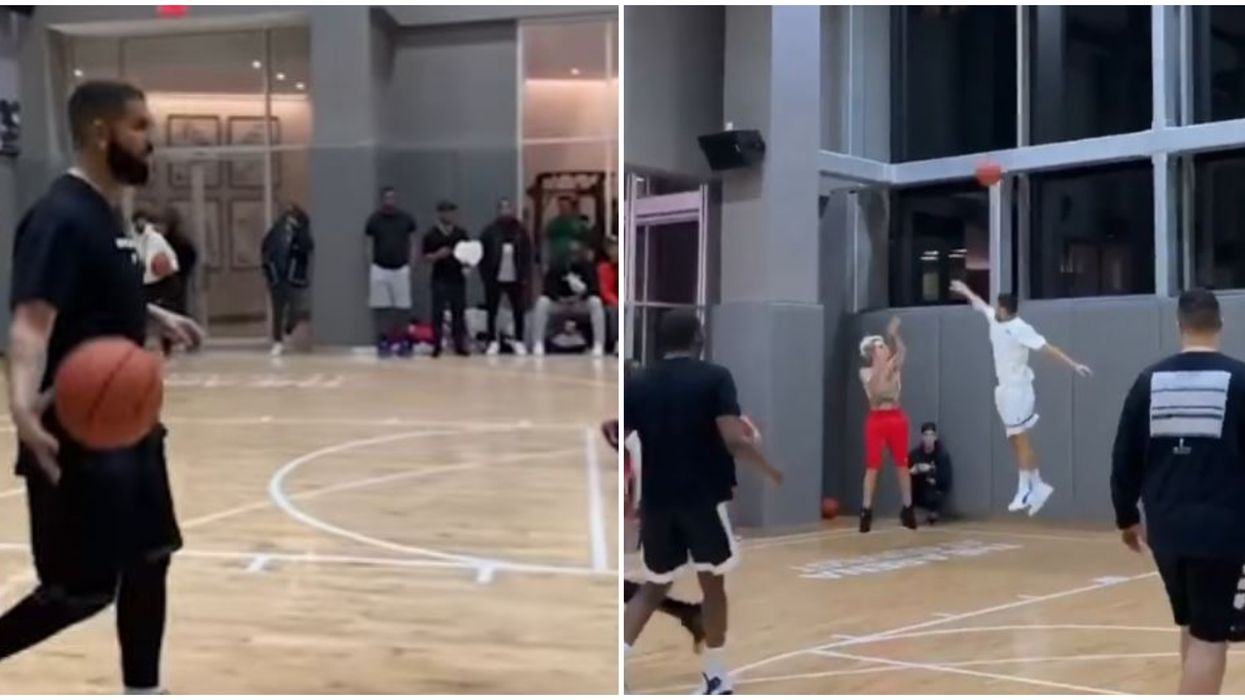 Here in Toronto, we know Drake and Justin Bieber like to try their hand at sports. Drizzy's affinity for basketball is well-documented, while Biebs seems to love the Leafs as much as anyone from the 6ix. And, on Thursday, February 6, the pair of music moguls were showing off their skills on the basketball court alongside Quavo and other stars.

Footage shared on Instagram shows the three stars, along with the likes of U.S. rapper Sheck Wes and DJ Clue, flashing what they've got.

The session was apparently taking place at Summit NYC in New York, per sources including Uproxx.

A 99-second video posted on Instagram by NBA skills coach Chris Brickley, who appeared to be dishing out tips during the practice, shows Drake and a topless Bieber being put through their paces.

The clip opens with Quavo drilling a shot from distance, before Drake produces his own Kawhi-lite moment with a bouncing rim shot.

Maybe that's why he's got that championship ring of his own?

In particular, Bieber and Quavo seem to have found a nice rhythm together. Perhaps not coincidentally, their collab track "Intentions" dropped on Friday, February 7.

As commenters on Instagram and wider social media pointed out, it ended up looking a little like a Quavo highlight reel. The Migos ringleader showed off a game that's flashier than his grill.

Meanwhile, photos also posted from the game on Brickley's Instagram show him hanging with Drake, whom he gives "GOAT status" in his caption.

Another snap appears to show the coach deep in discussion with Bieber. Brickley's caption reads: "Teaching Justin Bieber the fundamentals of shooting."

Meanwhile, Bieber posted a video on his own Instagram which shows the topless bleached-blond 25-year-old nailing shots from the corner.

And it didn't even look like this video took advantage of, erm, creative editing. Viewers previously accused Drake and DJ Khaled of putting some spin on their performance in a shootaround recently.

Meanwhile, Quavo's own sharing of the video posted by Brickley had Drake all up in his mentions.

ChampagnePapi's comment on Quavo's post reads: "Huncho played for 16 hours straight and had this footage edited in 6 mins 😂😂😂😂 nah you went off my cro for real 😳 crafty sharpshooter."

Quavo's apparent ball skills should maybe come as no surprise. After all, he'll be repping in the NBA Celebrity All-Star Game next weekend, per Revolt.

While neither Drake nor Bieber is involved in this year's Celeb ASG, both have taken part in some form in the past, notes Uproxx.

Drake coached one of the celebrity teams in the 2016 event. As for JB, he played in 2011 and again in 2018, winning the game’s MVP award in the first of those games.

Anyway, it's good to see Drizzy has apparently lost the salt he seemed to have after he jokingly whined about being left out of Bieber's meet with the Toronto Maple Leafs a few weeks back.