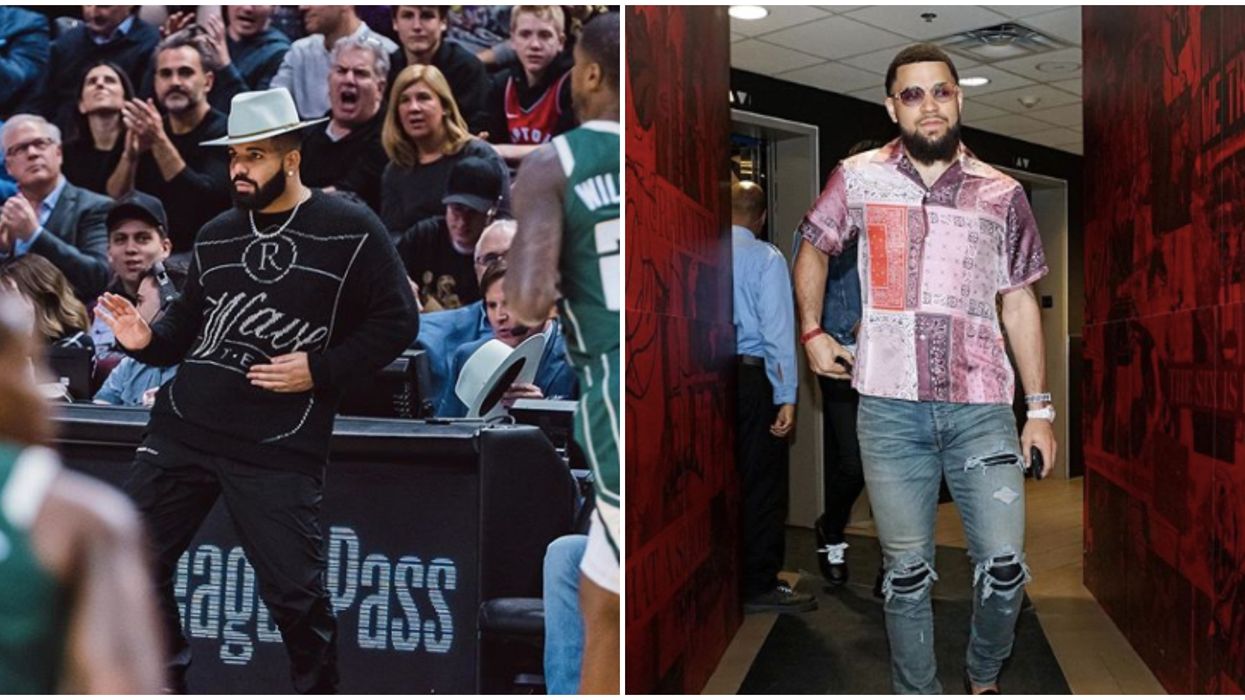 February 25 was a special day for one very important Toronto Raptor. And his biggest fan, Drake. The Raps faced off against the Milwaukee Bucks on home court and Drizzy was once again helping out on the mic. And Toronto seems particularly taken with Drake's Fred VanVleet hats that the star brought to the game in honour of his so-called twin's birthday.

The team's ambassador showed up with special "Frederico" hats to gift to his commentatory buddies Matt Devlin and Jack Armstrong.

The wide-brimmed accessories were embroidered with "Frederico" in honour of VanVleet's new nickname. That moniker was given to him by Drake himself in honour of his post-All-Star break tan.

Drizzy took advantage of a Bucks free-throw pause to hand over his special gifts to his pals on the mic.

Drake, acting like a big bro to his doppelganger, seems to have a pretty great bond with FVV. So it shouldn't be a surprise that he brought something special for his birthday.

ChampagnePapi sure had fun throughout the game, sporting the gaudy hat and showing off some salsa as his twin scored a three-pointer.

He even brought two extravagant WWE championship belts to remind the Bucks who are the champs. He managed to troll last season's MVP, Giannis Antetokounmpo, while on the sidelines. Giannis has been regularly linked with a move to the Raptors this season.

Fans went to Twitter to share their thoughts on Drake's stunts. Plenty of them seemed to find his distractions funny, and there was particular praise for his moves.

Notably, fans were also looking to cop one of the hats. Some even suggested it should be the next Scotiabank Arena game-day giveaway.

"How do I get one of those Frederico hats?" reads a tweet.

If you find out, please let us know.

Maybe this will inspire a new OVO x Raptors collab to add on to the practice jerseys? After all, we all know how popular these were.

Either way, we hope Frederico VanVleet's birthday was totally brimming with fun.