GO Transit says approximately 80 people are on the tracks. 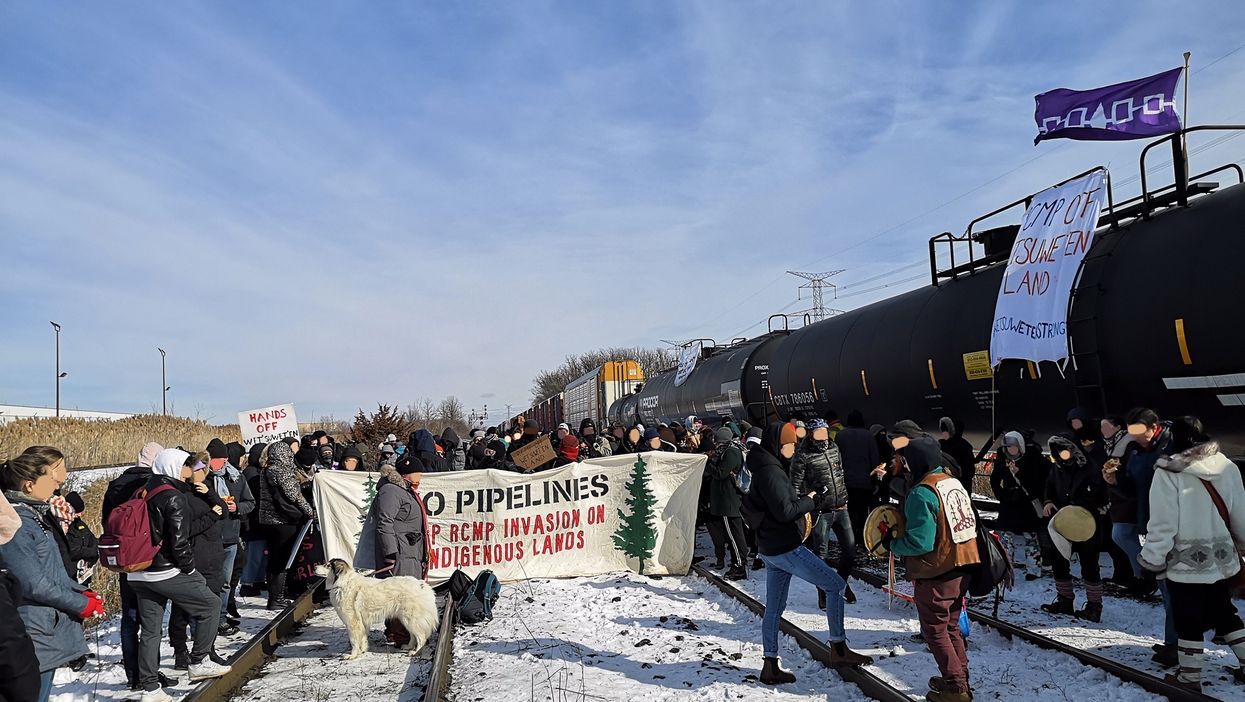 There's been a service disruption for trains going into and out of Toronto on the Barrie Line. The GO Train rail blockade has led to cancellations and modifications to service. People are showing up there and across the country to protest in solidarity with the Wet’suwet’en First Nation.

In a statement to Narcity, Metrolinx spokesperson Nitish Bissonauth said that approximately 80 people are on the tracks north of the York University GO Station which is on the transit provider's Barrie Line.

"We've cancelled some trains and modified our service as a result," he said.

However, trains are still running between Maple and Aurora.

Some people who had gotten on the train are stuck onboard and were "offered no explanation as to why we haven’t moved and an ETA on when we will move," one passenger said on Twitter.

"Our priority is to ensure everyone near the tracks remains safe," Bissonauth said.

If people need to travel north from Union or Downsview Park, they can show their GO fare at staffed entrances and take the TTC to the Highway 407 station. There's a GO Bus shuttle running from there to Rutherford and Maple stations and then trains further north.

If people need to travel south, there's a GO Bus shuttle to Highway 407 station and then people can connect on the subway south to Union by showing their GO fare.

Due to unexpected interruption, we are only able to run #GOtrain service between Maple and Aurora GO. We are workin… https://t.co/CJSSB3idzQ
— Barrie Train (@Barrie Train)1581794016.0

@brandon_maron @GOtransitBR Hi Brandon, Apologies for the inconvenience. Protesters are blocking the tracks and we… https://t.co/kGrzbUdztE
— GO Transit (@GO Transit)1581792722.0

In a tweet, Go Transit’s Barrie line said that they can’t confirm when this will be resolved because “the disruption is out of our control.”

On February 15, they were served an injunction by police at the blockade in Vaughan but burned it in solidarity.

Back on February 6, the RCMP moved in on the Wet’suwet’en First Nation territory and arrested people which led to people coming out in solidarity all over Canada.

Conservative Party Leader Andrew Scheer went on the offensive about the protests and called the blockades “illegal” in a press conference.

He also said that people who are standing in solidarity with the Wet’suwet’en First Nation “need to check their privilege.”

Along with the disruptions with GO Transit, other train service is being affected like VIA Rail.

The nation’s hereditary chiefs said in a statement that they never consented to the Coastal GasLink pipeline and that they will "continue to resist colonial and gendered violence against Wet’suwet’en people, and to protect Wet’suwet’en lands for future generations."