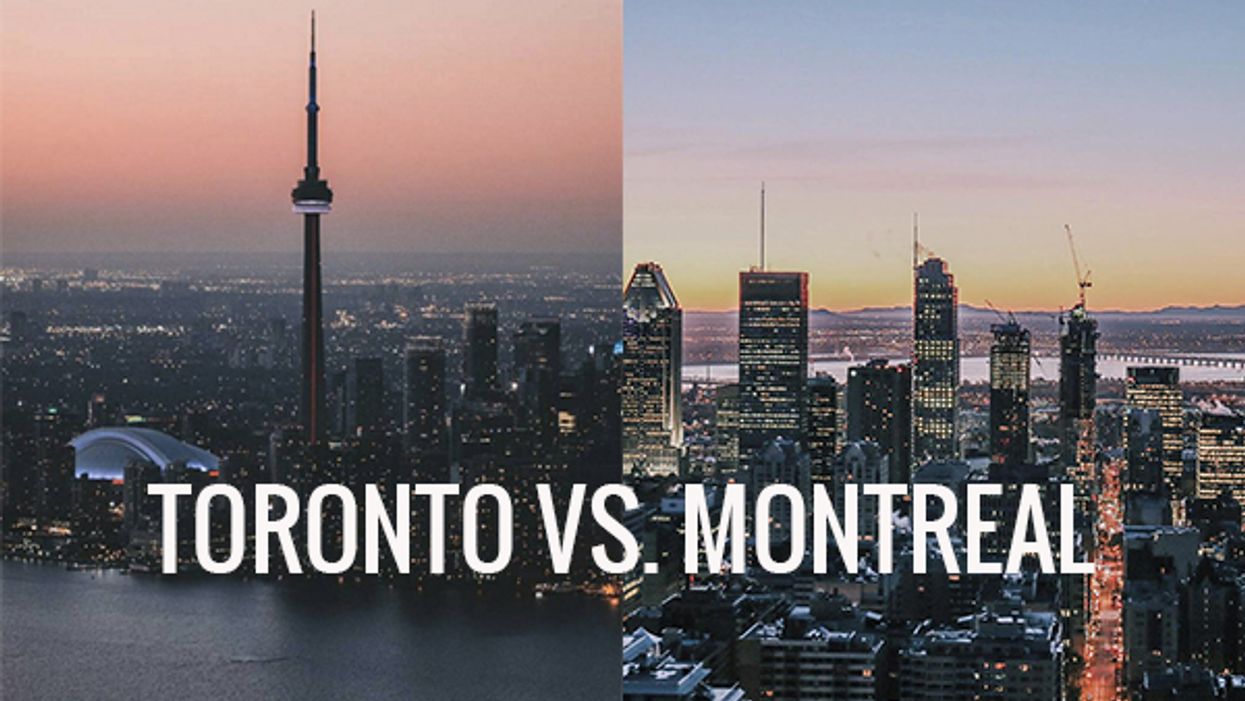 Ahhh, the age old question: Montreal or Toronto? Us Torontonians love visiting Montreal for a variety of reasons including proximity?, affordability?, and it's basically the closest thing we have to going to France.?

Recently, Irina from MTL Blog, wrote an article where she had the two cities go head-to-head in a battle royal for who can claim that they truly are the party capital of the Canada (Sorry VanCity...next time?). We're going to challenge her comparison and write our own version of Toronto vs Montreal, when it comes to going out, and here's what we got:

We have to agree with Irina here, who said that while Montreal has plenty of food variety and great restaurants, one must do some research to do so. If you are walking down St. Catherine's street, sure there are plenty of good restaurants, like Kazu, but they are very spread a part and surrounded by much-less appealing establishments?.

Meanwhile if you stroll down a main street like King St or Queen St, you will find eatery after eatery that will be all be top notch. Go to the corner of King and Portland and there are LITERALLY 10 or so restaurants one after another, like Valdez, Home Of The Brave, The One That Got Away, that will all show you why Toronto wins this round.?

While both cities have amazing service, we still want to say Toronto has got Montreal beat. Why? Because in Toronto, to stand out, places need to go above and beyond to survive. Facts are just facts: Toronto is a larger city, aka there is more competition for businesses aka service better be incredible.

A friend of mine, who's actually from Montreal, recently went to People's Eatery and told me she was blown away by the service. The waiter allowed her to try the wines?until she was happy with the right one, checked in with her table constantly, said he would let them know if they had ordered too much food, and even offered to cancel plates they had ordered if they were full. It was not just placing orders and delivering plates, the server cared about his customers, and THAT is good service. ?

Again we will agree with Irina, who said "if you’re on a business trip in Montreal and decide to go out out alone, you’ll end up with ten new best friends." She's right, people in Montreal are much more easy going and friendly, while Torontonians are known to be a bit more standoffish.

However, the crowd in Toronto overall is somewhat classier. Maybe it has something to do with our drinking age being a little higher...hmmm?.

Let's get real: Toronto going-out spots are much more grand than those in Montreal. We are constantly compared to NYC? and thus, need to act accordingly. We have beautiful restaurants, bars and nightclubs all over the city where the most important thing is not even the food, service, or crowd but the "vibe". Take the club Wildflower, located in the basement of the Thompson Hotel, for example: it's like something out of a Weeknd music video, some exclusive place that you just got a coveted invite to, yet it is a club just like any other that is totally available to anyone willing to pay cover.

It's the vibe that makes it so special; everyone came together in this one spot specifically to be a part of this vibe. You could even say Torontonians are proud of where they are going out to party that night.

In Montreal, the destination of the night is usually not preplanned and it's more so a group of friends getting drunk somewhere before hand, and then finding whatever is closest, often not even sure where they are while standing in line.

We'll give the win for this category to our opponents (you know, cause we're good sports?).

While Irina says Torontonians are cooler due to their unapproachability, the places that are really legit like those in Old Port, are definitely cooler. The Montrealers who go out there are also much cooler than the average Toronto partier, with their unique style that you can't get just by jamming yourself into a crop top and pencil skirt from Aritzia, sorry Toronto.?