Who did it better, John Tory or Kawhi? 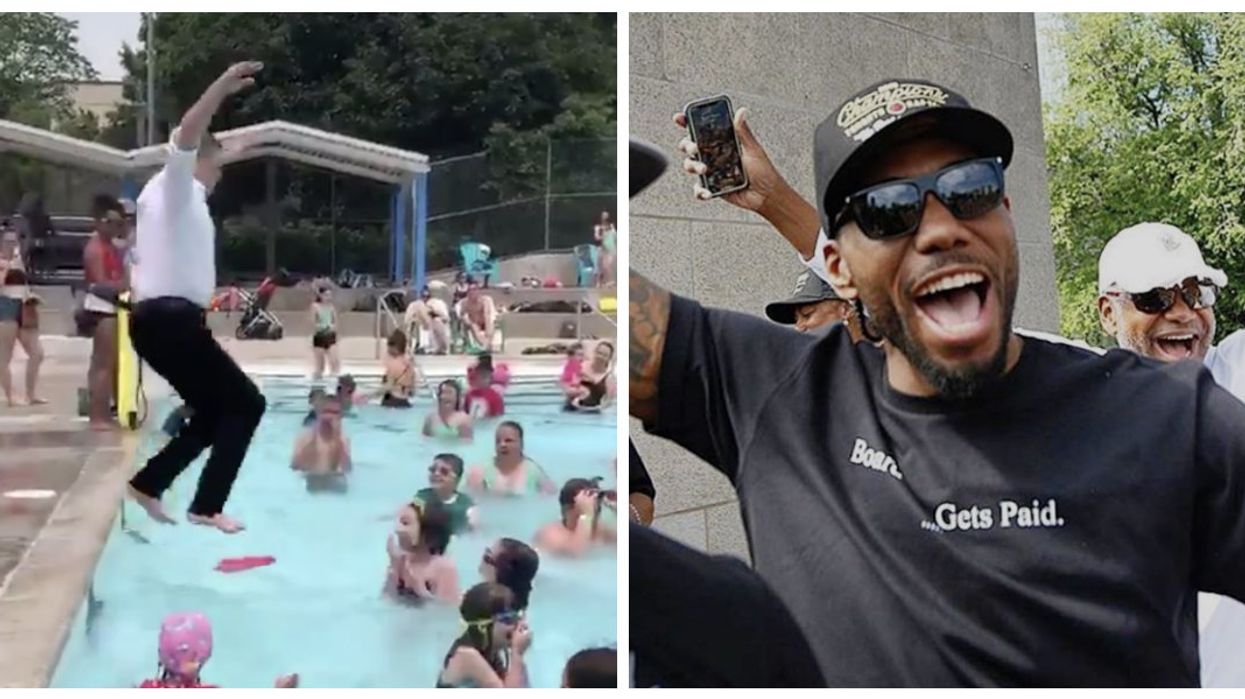 Kawhi Leonard may be the people’s champion, but John Tory is the people’s mayor. Tory has won a lot of people over lately. His passionate support of the Raptors at Jurassic Park, where he celebrated with fans in a blinged-out jacket, definitely scored him some brownie points with the city. His latest stunt really shows just how down-to-Earth the man truly is.

Mayor Tory kicked off the summer season Friday morning by leaping into Toronto's Giovanni Caboto Outdoor Pool fully clothed, like a little kid who was finally done with school and ready for summer. Tory was at the event to help celebrate the beginning of the city’s outdoor pool season.

Tory’s jump didn’t seem staged or cheesy, it looked to be entirely in the moment. The photographs and videos of the mayor’s face show the face of a man having the time of his life. He doesn’t even look out of place among the kids, who cheered as he dunked into the pool.

Mayor John Tory, plunging from a slide into a public pool just now to mark the launch of summer in the city. ⁦… https://t.co/Hd8tzNennZ
— Francine Kopun (@Francine Kopun)1561741367.0

Each year there are over a million and a half children, youth and adults who swim in our outdoor pools and wading p… https://t.co/g5yzSmbofO
— John Tory (@John Tory)1561743576.0

And Tory wasn’t the only one having fun in the sun this week. Photos of Kawhi Leonard and his long-time girlfriend Kishele Shipley cruising around Barbados in a floaty broke the internet this Thursday.

Aside from being Toronto's Fun Guys, Kawhi and Tory have another thing in common. Their willingness to do whatever it takes to get the Raptors to win.

Leonard played through injuries during the Raptors playoff run, leading them to their first Championship title. Every basketball fan knows how integral Kawhi was to the win, Tory included. Tory even went as far as to say that he would step down from his position as Toronto's mayor if that’s what it took to get the NBA all-star to stay.

Fans have high hopes that Kawhi will become a long-term fixture in the city. If he does, we wouldn't be surprised if John Tory threw a citywide pool party to celebrate!