Complete with an actual laugh, too! 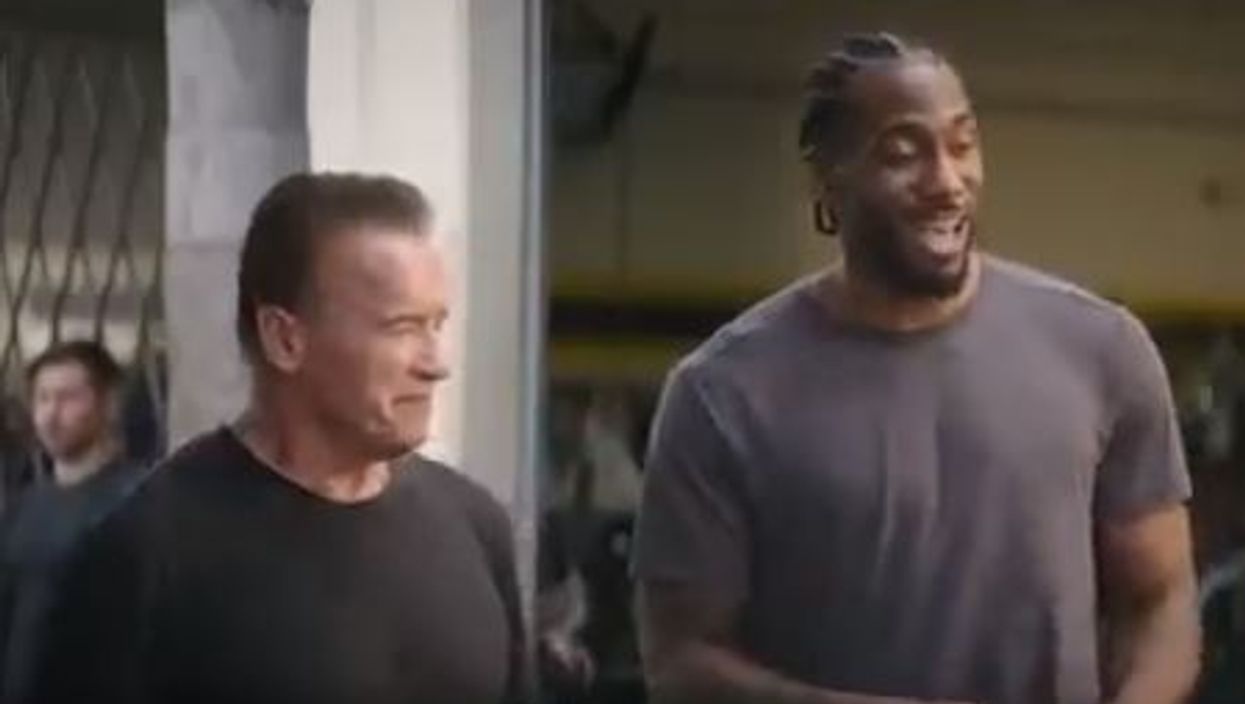 It looks like after spending some time in LA, Kawhi has already made some new friends, and some pretty famous ones at that. There's no doubt Kawhi is loving being back in sunny California and taking in all the fun of Hollywood. The Claw is enjoying himself so much, in fact, that there's now a pretty random Kawhi Leonard Terminator trailer which has, it's fair to say, divided fans.

After being dubbed "the Terminator" during the Toronto Raptors' run to becoming NBA champions, it made sense for Kawhi to come face-to-face with the original Terminator now he's in Cali.

Clearly, the vid is in an effort to promote the upcoming movie Terminator: Dark Fate but there's no denying this collaboration is eye-catching, not least for Kawhi making an effort to break down the barrier to a potential side career in acting.

The trailer starts with Schwarzenegger welcoming Kawhi to LA as they run into each other at the gym. "It's good to see another Terminator," says Schwarzenegger, referencing Kawhi's nickname.

Arnie goes on to explain that Kawhi is Terminator because he has "no emotions, feels no pain, and has no mercy." Given the ruthless way Kawhi led Raptors to their winning season, Schwarzenegger might have a point.

The trailer was released today in honour of the new NBA season, which tips off with the now-Kawhi-less Raptors hosting the New Orleans Pelicans at Scotiabank Arena on October 22.

The video, as you might expect, got a mixed response.

Some fans seemed to love the promo as it did the rounds on social media, finding Kawhi's appearance hilarious. "The NBA is back baby!" said one Twitter user in response to the video, and the new-season hype is clearly strong.

The Kawhi cameo went down a treat with some, which we suspect might largely be down to the superstar's rather robotic reputation. However, others are pretty baffled by the video, and some believe Kawhi is pushing — or being pushed, at least — a little too far.

One user even goes as far as to suggest Kawhi has been "ruined" by the appearance, although we think that's a bit harsh on the NBA Finals MVP.

"Capitalizing on what made him likeable is turning out to look cringe. They need to stop embarrassing him like this," says one Tweet.

@WalderSports Capitalizing on what made him likeable is turning out to look cringe. They need to stop@embarrassing him like this.
— Luul (@Luul)1571761468.0

"They did him dirty. This is not the same person we came to love for his character. The LA influence is higher than ever before," replies another.

@WalderSports They did him dirty. This is not the same person we came to love for his character. The la influence is higher than ever before
— George Finch (@George Finch)1571761110.0

Unfortunately, you can't please everybody, especially Raptors fans who have had to watch their hero pack up and leave since he brought the Larry O'B north of the border.

Still, this vid didn't have fans cringing quite as much as Kawhi's Clippers promo, which was so awkward it genuinely led to fans wondering if he was being forced into filming the clip.

All this talk about Terminators, lets see if this season shows us all of that.