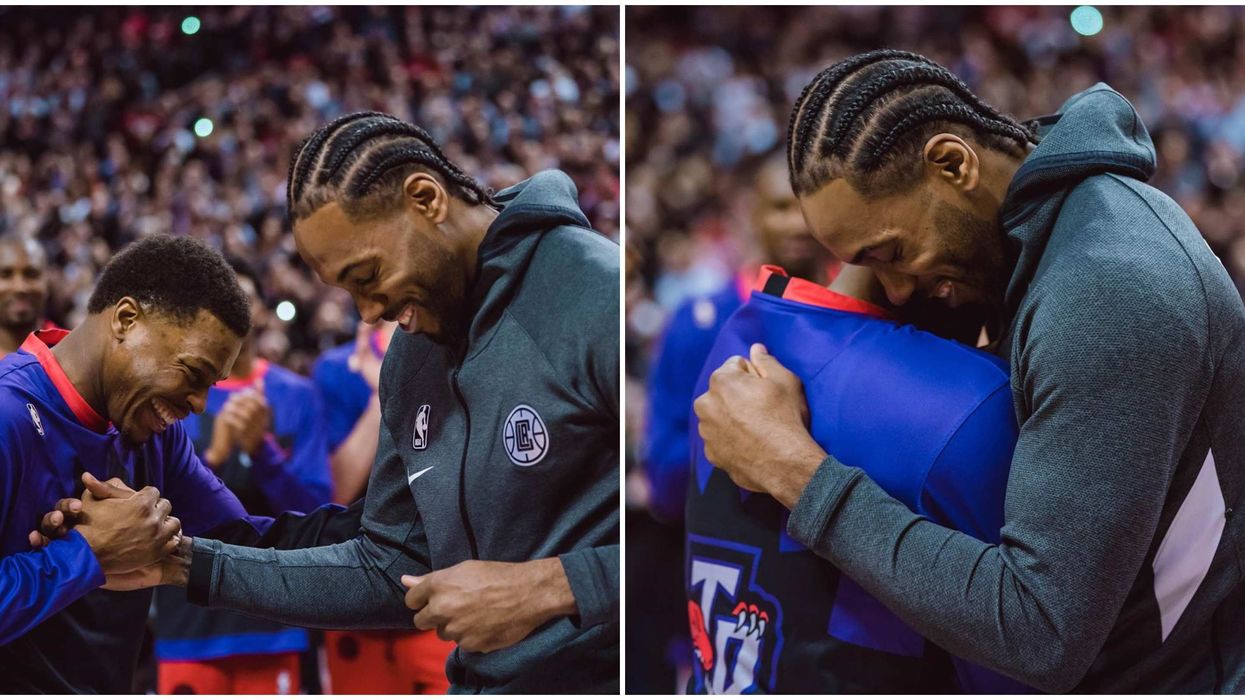 A pre-game ceremony before the Raptors clash with Leonard's Los Angeles Clippers celebrated "Fun Guy" and his NBA championship-winning year in the 6ix.

A tribute video was played over the big screen and a standing ovation recognized Kawhi's huge contribution in delivering glory to the city and Canada.

And part of the ceremony saw the Raptors' ops team light up the path Leonard famously followed to score his iconic buzzer-beating Game 7 winner against the Philadelphia 76ers in last season's playoffs.

In that game on May 12, 2019, if you somehow don't remember, there were 4.2 seconds of the game left on the clock when Leonard moved from a central position to the far corner.

His shot bounced several times before falling good with time up on the clock to win the Raptors the game, and the series. It was, surely, a truly spine-chilling moment for any Canadian watching.

The Raptors recreated that moment in magical fashion on Wednesday as part of the pre-game honouring ceremony for Leonard. And onlookers were so, so here for it.

The Raptors court has Kawhi’s path to the buzzer beater over the final 4.2 seconds on the court during his video tr… https://t.co/KIazsZzZPg
— Faizal Khamisa (@Faizal Khamisa)1576109482.0

"Production needs a huge raise, wow," wrote one onlooker. "I am so blown away Raptors."

Raptors re-traced the path Kawhi took to the buzzer-beater vs. Philly during his welcome back video. V Dope. https://t.co/4gAGxHfAxs
— Rob Perez (@Rob Perez)1576109598.0

The freaking footsteps of the winning shot. Production needs a huge raise, wow. I am so blown away @Raptors.
— Catherine (@Catherine)1576111074.0

My goodness, what a tribute the Raptors gave to Kawhi just now. They literally re-created his footsteps from the Game 7 shot.
— Matthew Cardenas (@Matthew Cardenas)1576109428.0

Wow. That pre-game tribute to Kawhi from the @Raptors was incredible. The footsteps on the court!
— Graham Ruthven (@Graham Ruthven)1576109425.0

During that pre-game show, Kawhi also finally officially got his massive hands on that championship ring, and it was his forever bro Kyle Lowry who bestowed it upon him.

When the pair reunited, it proved that the bromance was still alive. They looked really happy to be back on the court together.

In fact, it was pretty delightful to watch for Raptors fans.

Kawhi fake-crying as he gets his championship ring from Kyle Lowry (via @Raptors) https://t.co/w2gLVstsvG
— Faizal Khamisa (@Faizal Khamisa)1576111034.0

Earlier on Wednesday, when asked about the reception he expected to receive at Scotiabank Arena, Kawhi had actually suggested he expected to hear more boos than cheers.

Really? Fans immediately told him he was crazy, and those attending Wednesday's game ultimately seemed to prove him wrong with their reaction to his return.

Leonard got a rousing reception, and the Raptors pre-game cinematics certainly added to the sense of occasion.

Kawhi may be gone from Toronto, but he's far from forgotten.