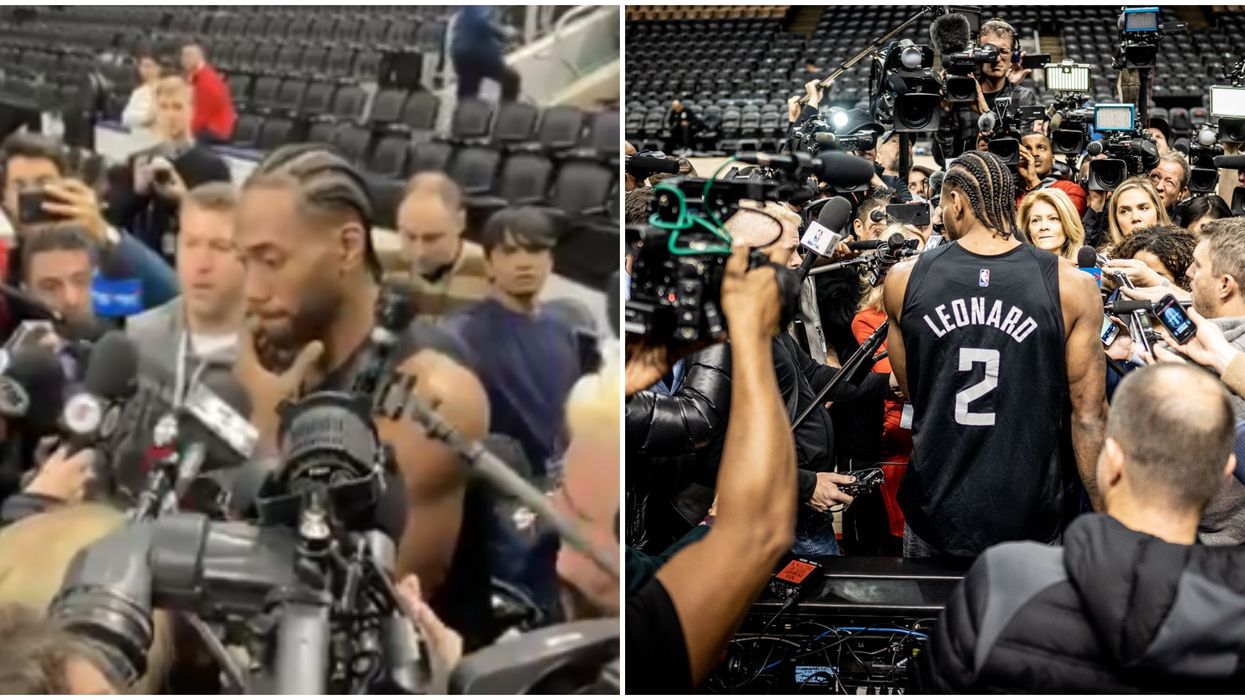 The day has come. Former Raptors hero Kawhi Leonard's Toronto return has arrived. Kawhi faces off against his old team on December 11, and he was mobbed by media as he stepped out onto the Scotiabank Arena court for the first time since leaving for the Los Angeles Clippers.

Tonight, Wednesday, December 11, he returns to his former home for the first time since going to Cali over the summer.

On Wednesday morning, Kawhi stepped back onto the court and, unsurprisingly, was greeted by a huge media scrum.

Photos and videos from the scene show The Boardman being mobbed by dozens of journalists and other personnel, each presumably keen to get that neat soundbite.

The Clippers player can be seen assailed by flashing lights, reporters, and camera crews as they try to catch him before the tip-off.

The strength and size of the media frenzy was surprising, even for some of those on the court.

At least, it certainly seemed that way, judging by reports from various attending journalists.

Photos and footage from the scene illustrate the bustling chaos around Kawhi.

Dozens of journalists waiting to be let on to the @ScotiabankArena court to scrum #Kawhi this morning ahead of toni… https://t.co/UWNVUnL2DC
— Nick Dixon (@Nick Dixon)1576079082.0

Just a few media waiting to speak with ‘Fun Guy’ Kawhi Leonard ahead of his return to @ScotiabankArena to take on t… https://t.co/ULmB0ColJC
— Lindsay Dunn (@Lindsay Dunn)1576078689.0

I never knew how bad I needed an iPhone until I saw how beautiful my Kawhi content is now compared to during the NB… https://t.co/JXxKlo0a4p
— Braydon Holmyard (@Braydon Holmyard)1576083350.0

The heightened media interest was to be expected. Tonight promises to be quite the occasion in Toronto.

But it seems Clippers staff and media were not quite prepared for this level of scrutiny.

"The general reaction of Clippers players and coaches who have seen the crowd of media here for Kawhi Leonard can be summed it up (sic) in one quote — 'Damn.'," tweeted LA Times NBA writer Dan Woike.

The general reaction of Clippers players and coaches who have seen the crowd of media here for Kawhi Leonard can be… https://t.co/f3nYXi4Inx
— Dan Woike (@Dan Woike)1576079782.0

And judging by the photos and footage of the scrum, "damn" is right.

The Fun Guy will finally receive his championship ring in a pre-game ceremony before showing the Raptors what they may — or may not — be missing.

The Raptors, of course, put out a heartwarming tribute to Kawhi and it got fans all in their feels.

There's no doubt the 6ix loves him for helping bring the first-ever NBA championship to the city, despite leaving after a single season.

That love isn't just one way either. A massive billboard outside Yonge-Dundas Square erected last night allows Kawhi himself to say thanks to the fans who supported him all last season.

"(The fans) were amazing last year," he said, per TSN's Josh Lewenberg. "They rolled with us through the ups and downs."

"We were down every series pretty much and they stuck through it with us. They brought great energy to every game and it helped us. So that's my thank you to them."

Kawhi fever is red hot right now. In fact, you might be forgiven for forgetting there's an actual basketball game on.