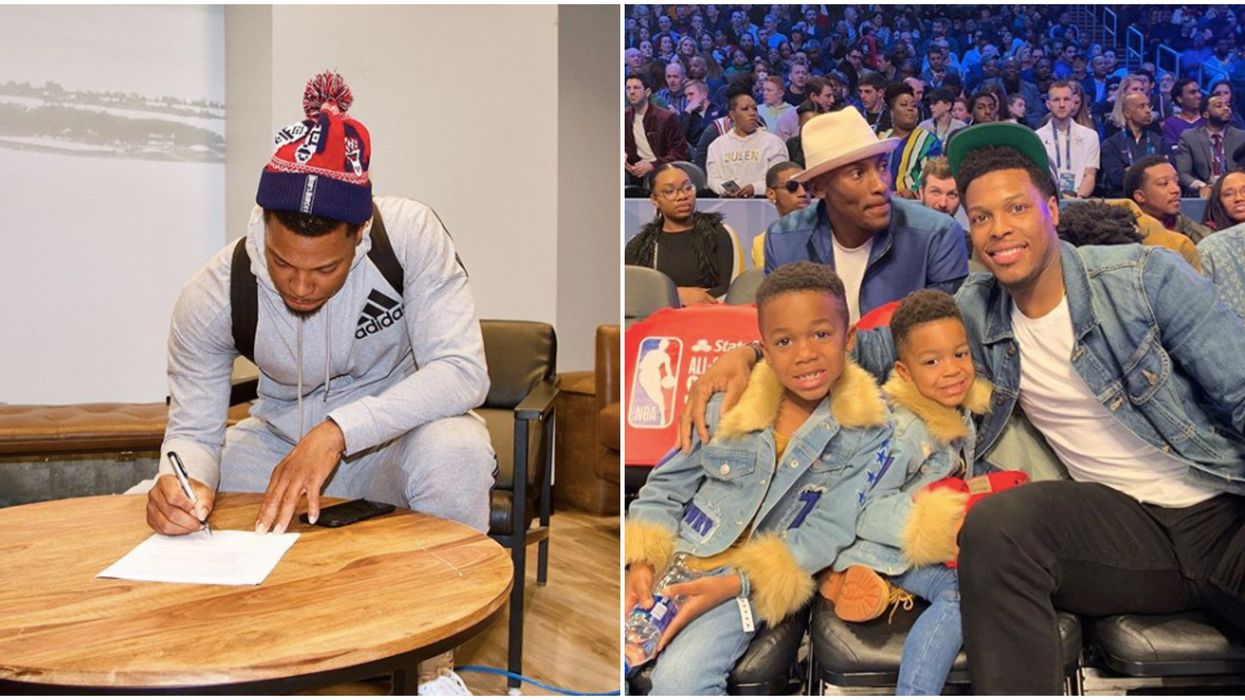 If you haven't already heard the news, one of the Toronto Raptors' most beloved stars just signed a pretty nice extension. The Kyle Lowry contract announcement on October 15 confirmed the point guard has signed a one-year extension. KLow is staying in the 6ix.

After being with the Raptors for eight seasons, though, Philadelphia native Lowry is a born-again Torontonian. After all, he's raised his children here.

Lowry has been a household name if you're a major Raptors fan and he's now an NBA champion, too. There's no doubt the city loves him, but that love is more than reflected by Lowry himself onto the city, his fans, and his teammates. Here are six great examples of Lowry being Lowry.

When He Said He Loves Raising His Kids In Toronto

Having grown up in Toronto, there's nowhere else you'd call home, and it sounds like that's the same for the little Lowrys. A couple of months ago, Lowry shared just how much he loves raising his kids in the city. In an interview with ESPN, Lowry shares that his wife and kids have grown to love Toronto and are enrolled in school here. "My kids will never see the way I grew up and that's a thing I am happy that they won't see but they'll understand where they come from, where I come from," shares Lowry in the interview.

When His Heart Called The 6ix Home

When He Fought For His Raptors Teammates

After losing his best friend on the team, Demar DeRozan, many fans wondered how the Raptors' dynamic was going to play out. But Lowry seemed only more determined to turn Toronto into a winning city. Last season's teammate Danny Green said of Lowry, per the Toronto Sun, "He goes after loose balls. He boxes out. Just every little thing possible. He's helped our team a ton. That's helped us get over a lot or win a series or beat some opponents in certain games." Then, there was the time he wouldn't let Norm Powell be overlooked:

When He Sent A Gift To A Pensioner Fan

There's no doubt Lowry loves his fans, but it's how he shows it that is so special. In an awesome and sweet way, Lowry sent a 92-year-old Raptors fan a gift that she'll hold deep in her heart. Alvena Chance received Raptors memorabilia and even a personal video message from Lowry, in which he thanked her for her support of the team.

When He Knew The Raptors Were Canada's Team

"It's a country you're playing for, not just a city," Lowry said back in 2015, and he has always seemed to carry that knowledge with him on the court. Playing in a city with such high expectations is one thing, but to be one of Canada's leading sports figures? That's a whole different pressure, but Lowry has risen to the task time and time again.

When He Joked So Much He Got His Own Blooper Reel

If we already didn't love him enough, Lowry has his own blooper reel. According to Forbes, the film will include Kyle Lowry, who is the longest-tenured Raptor and is shown the most in this movie, sharing his story about redemption after all these years. You can expect to see some hilarious clips of Lowry during what was the greatest season in both his and Toronto's memory.