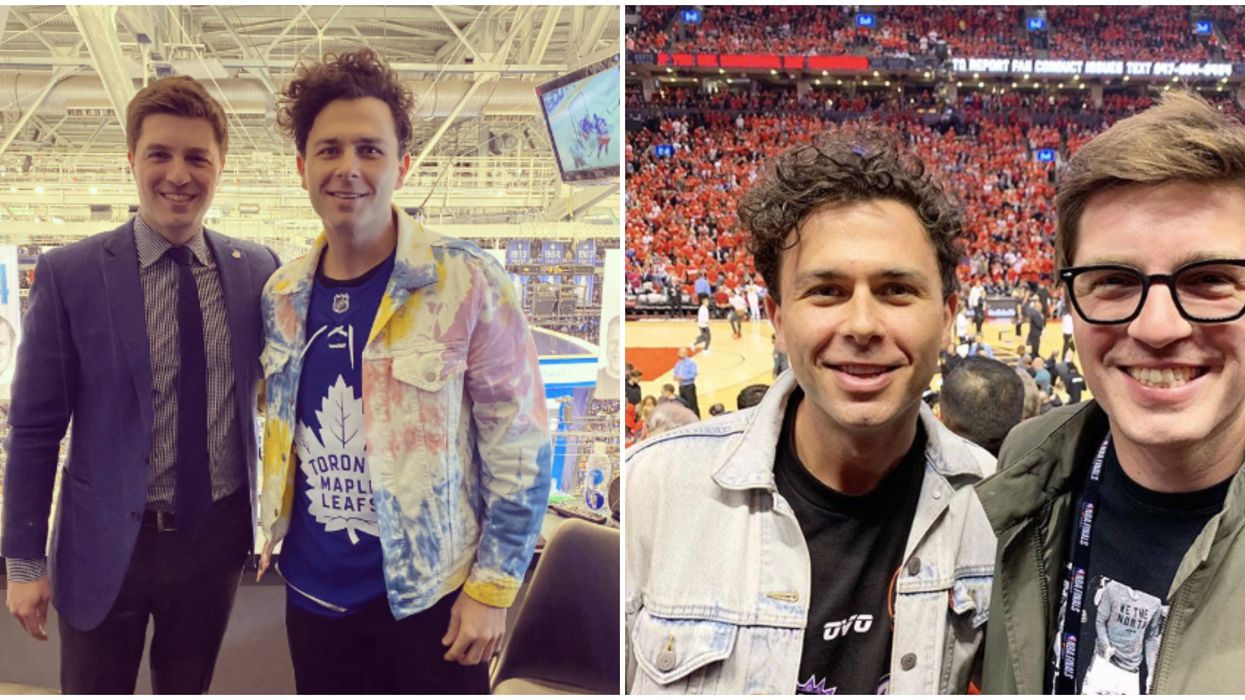 Sometimes, the Canadian worlds of music and sport combine neatly. And one notable crossover is between Kyle Dubas and Max Kerman. The Maple Leafs' GM and Arkells frontman made local headlines in February 2020 for spending time together on the team's mentors' trip, but the pair have actually been close buddies for years now.

The mentors' trip was aimed at thanking the people who helped shape the lives of players and personnel on the Leafs. And Dubas knew exactly who he should invite.

According to The Athletic, he brought along Arkells singer Kerman as an example of someone who had also found success at a fairly young age.

If anything, though, they probably just wanted to hang out.

After all, this trip is just the latest example of the men enjoying what seems to be one hell of a bromance.

They've been friends for years after actually becoming closely acquainted through Dubas' wife, Shannon, who shared mutual friends with Kerman.

Mrs. Dubas asked if her husband, then an assistant GM with the Leafs, could visit the band in the studio while they were recording their 2016 album Morning Report.

And, in fact, in an interview with TSN back in 2018, Kerman recalled that time when Dubas came by the studio.

"We've become pals with Kyle and he came by the studio when we were making our last record," said the singer of the Hamilton-formed band.

"I'm into the front-office stuff, so I'd like to do a swap with him where I could run a team and he could be in a band, I think he'd like that."

We're here for that experiment, to be honest.

Kerman thinks the bromance would have started much longer ago if they'd have found themselves in the same circles earlier in life.

“If we had gone to the same college, we would have been pals,” said Kerman, via The Athletic.

From the singer's assessment, you can understand why.

They're a similar age, with the vocalist aged 33 years old to the GM's 34. Kerman says they're each politically minded, totally obsessed with sports, and enjoy being part of an awesome team.

Since the 2016 studio visit, the two actually realized how much they have in common, including their love for basketball.

They're such close friends that TSN's Matt Cauz and Bruce Arthur even took the chance to ask Kerman back in June 2018 if he could confirm rumours the Leafs were pursuing John Tavares.

"I have no information for you there," Kerman laughed at the time. However, he added that "Tavares is liking a lot of Dubas' tweets and stuff like that."

Maybe he knew more than he let on? Barely two weeks after that interview, the Leafs signed Tavares.

Regardless, their friendship is evidently so strong that they even support each other from time to time through Twitter, such as Dubas sharing articles about the Arkells.

That kind of repping is hella cute, to be honest.

And, just last year, Dubas was unable to attend the Arkells' Toronto show due to a pesky Leafs match in Arizona.

While in Arizona, @kyledubas left a voicemail for @arkellsmusic, requesting the song Blueprint for the fans at Scot… https://t.co/8Eld7lMZLV
— The Leafs Nation (@The Leafs Nation)1550438502.0

But he still managed to call in and request his buddies play a particular song during the band's audience choice section.

The band famously rocked out with Raptors coach Nick Nurse after the NBA championship win last summer, even if we have reason to believe Nurse prefers the Damian Marley vibe.

But it seems the true bromance — for Kerman, at least — is with Dubas. And long may it continue.

Anyway, Arkells and Canadian sports. What more can you ask for?