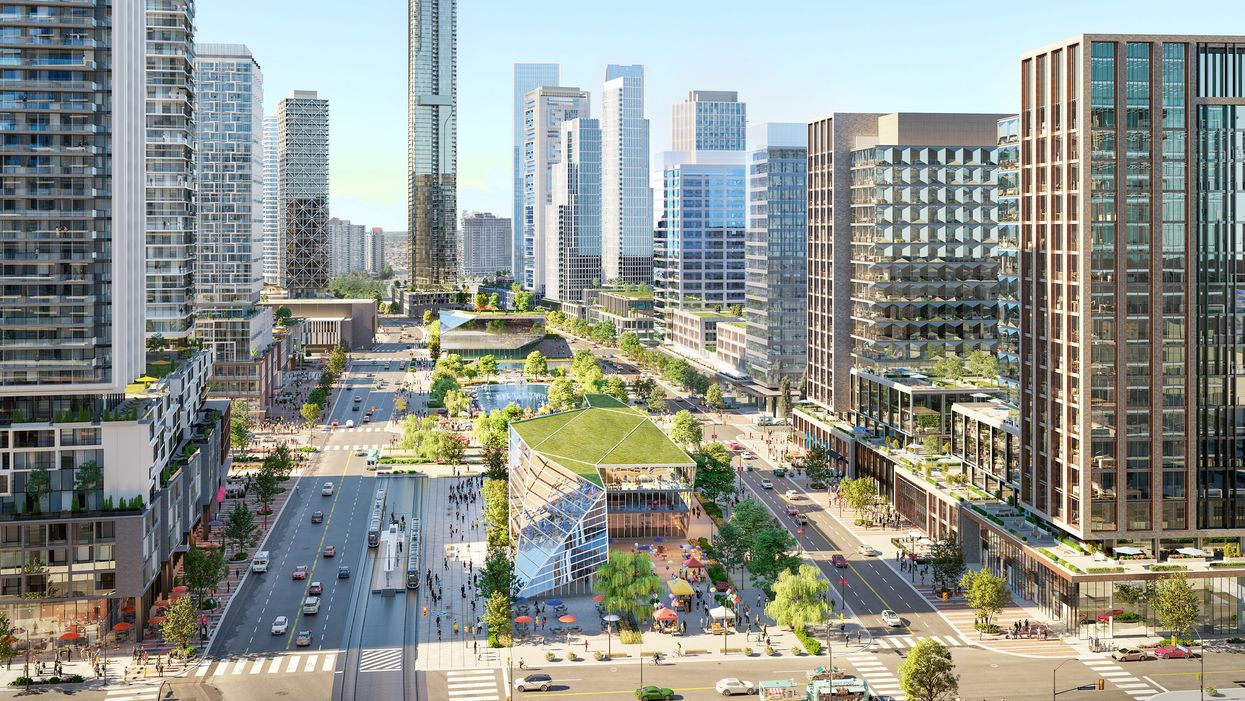 Mississauga, get ready! A new hotspot is coming to the 905 city in the form of an 18-million-square-foot "neighbourhood of the future." The Mississauga Square One District will transform 130 acres of land around the shopping centre into a village community which is described as the largest of its kind in Canadian history.

According to the official release, the plan announced January 21 will see Oxford Properties Group and the Alberta Investment Management Corporation join forces to turn current parking lots into a new population.

The project, which will be comprised of 18,000 residential units among other things, was announced by Mississauga Mayor Bonnie Crombie on Tuesday.

"On hand to help launch #SQ1District, a new mixed-use community in the heart of downtown #Mississauga. This livable, walkable district will be a hub for 35K jobs and residents, office & green space," Crombie tweeted.

Around half of the 18,000 residences will be market rental units, something which pleases the mayor.

Housing is far from all that will arrive in the area around the Square One shopping centre as part of this plan, though.

There will also be a transit hub that will be connected to the Hurontario LRT, some community buildings, parks, green spaces, and office spaces, per the release.

The first phase of the construction will begin with housing. Two residential towers with a 36-floor, 402-apartment building and a 48-storey, 575-suite condominium structure, will be constructed starting summer 2020.

Meanwhile, 5,000 residential units will be constructed over the next five to seven years.

The plans repeatedly talk of a "mixed-use urban community" and it appears diversity, both of residents and of amenities, is front of mind for the project.

"Square One District is a bold vision to repurpose underutilized land in the heart of downtown Mississauga to create an entirely new mixed-use urban community,” said Eric Plesman, Executive Vice President and Head of North America for Oxford Properties.

“Our ambition is to build a community more than 35,000 people will be proud to call home."

A main focus of Square One District will be The Strand, described as "a pedestrian-friendly, connected civic space anchored by a transit hub and a community park."

Mark Cote, Oxford Properties' Head of Development, Canada, explained that a primary aim is to bless 'Sauga with "a walkable, downtown district."

Areas like Port Credit are also in the early development process of gaining a similar community that would see the creation of more residential buildings and shopping experiences right on Lake Ontario.

And with new developments come new jobs for the community. The first phase of construction will create 3,500 jobs and that total should reach about 6,500 during the first five years, according to the project fact sheet.

The plan is to forge 35,000 new direct jobs throughout the span of the development during the next few decades.

Although things are yet to actually get off the ground in terms of the action phase, the approval of the plan means it's exciting to see what's in store for the future of Mississauga.