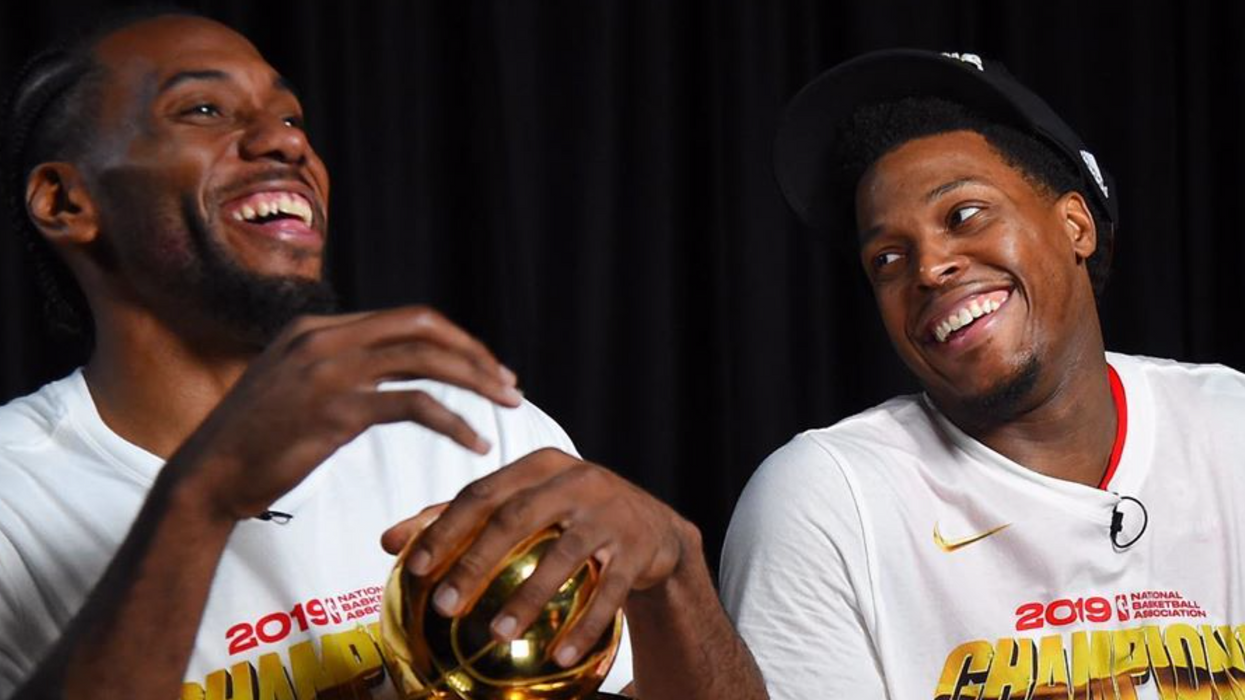 It was a momentous night last night for Canadians across the country, as for the first time in history, the Toronto Raptors beat their rivals the Golden State Warriors in Game 6 last night and became NBA champions. As fans flooded the streets of Toronto last night to celebrate the incredible win, one hilarious fan was already thinking about Kawhi’s future in Canada. Carrying a ginormous, freshly up-rooted shrub in his hands, one man is going viral. ‘Plant Guy’ tried to give Kawhi Leonard an usual present, that he believes will convince him to stick with the Raptors.

Once the confetti has been swept from the streets of Toronto and normality begins to resume again in Canada, the lingering question in the back of every Raptors fan's mind will come back with a bang: will Kawhi Leonard stay in Canada?

One fan decided to take matters into his own hands by trying to give Kawhi an unusual present. A Global News reporter asked this 'Plant Guy' what he was carrying and he simply said, “It’s a housewarming gift for Kawhi. He’s staying!” When asked what kind of plant the massive shrub was, he said, “It’s a plant for Kawhi. It’s a Kawhi plant. It’s a Kawhi cactus. A Kawhactus.”

Seeming to forget that Kawhi Leonard would be thousands of miles away in Oakland, California celebrating the win, Plant Guy asked around if anybody had seen Kawhi. He said “I’m waiting. Have you seen him? …. Well, when you see him, tell him I’ve got a housewarming gift. Tell him I love him. Tell him thank you for the shot.”

The Internet is now obsessed with the Plant Guy and he's been trending on Twitter.

Global News' Mark Carcasole caught up with a Raptors' fan dubbed "Plant Guy" who was carrying a plant that he wante… https://t.co/pYhq4eOI6k
— Globalnews.ca (@Globalnews.ca)1560490992.0

As the potentially-a-little-drunk Plant Guy left with his small tree, he started to chant “We the forest,” a mash-up of the Raptors slogan “We the North.”

Naturally, basketball fans who had seen the coverage took to Twitter to praise Plant Guy's attempts at convincing Kawhi to stay in Canada. One fan posted "Plant guy is nearly my favorite person in the world" and another said "#PlantGuy for president."

Some Raptors fans were a little worried about Plant Guy this morning, with some Twitter users asking him and his plant was.

Leonard, who has had an unbelievable NBA season and was near-unanimous Finals MVP, has not yet confirmed whether he will be staying in Toronto next season or leaving in free agency this summer. The fan-favourite has been linked to the Los Angeles Clippers for a while, but there is a chance that the Raptors phenomenal NBA win could convince him to stay in Canada.

Wherever Plant Guy and Kawhactus woke up this morning, hopefully they had a brilliant night celebrating the Raptors historic win. Who knows? Maybe it won't be long before Kawhi Leonard comes looking for his unique housewarming gift!