So much "art" in one picture. 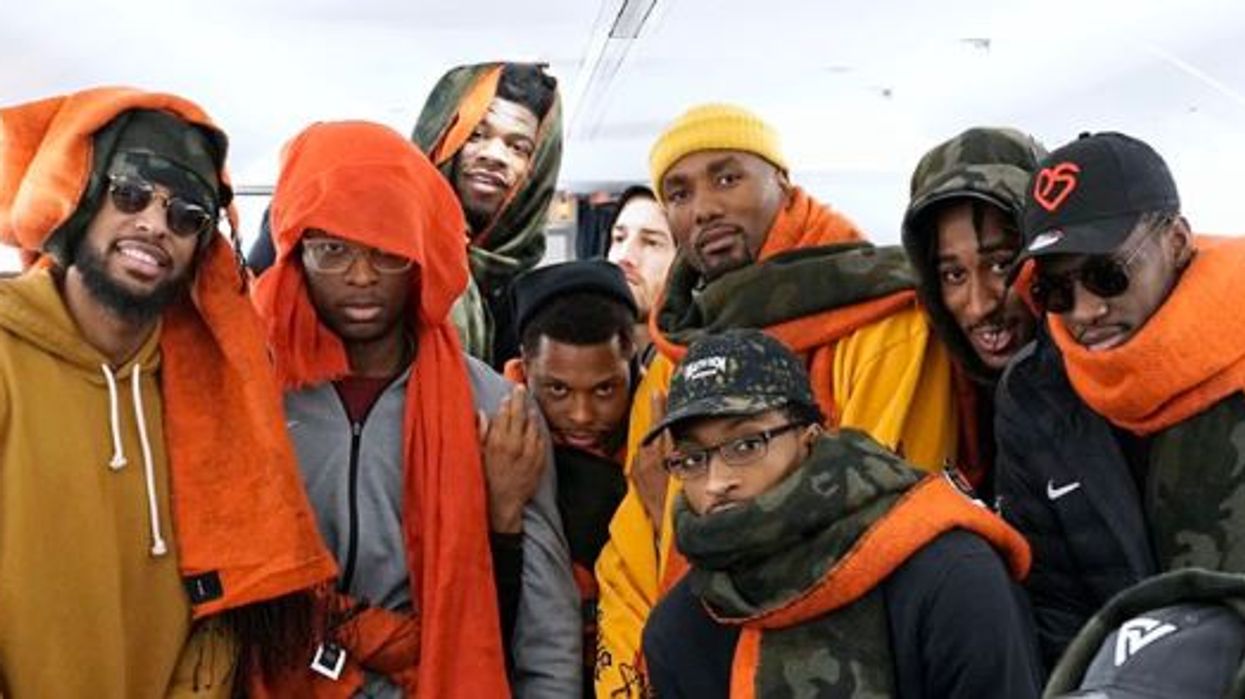 Can there be a more fun team in the NBA right now than the Toronto Raptors? After a week dominated by Serge Ibaka's scarf selection, it appears the franchise's resident "art" expert is happy to share the wealth. Serge gifted his teammates their own fashion statements on Tuesday, February 11 and footage from on the team's plane documented the chaos as it unfolded.

A hilarious video of Ibaka and his teammate OG Anunoby has become a running joke for Raptors fans.

First, OG trolled his pal by suggesting that Ibaka's fashion sense was all subtly stolen from the London-born baller.

Then, the two had a downright sensational "scarf-off" before a game that saw them escalate their lighthearted "feud."

Now, while the team was on a flight to New York on Tuesday ahead of their game against the Brooklyn Nets, Serge has taken things up to a whole other level.

How did he do that exactly? By spoiling his teammates with camouflage-coloured scarves.

In an Instagram story posted by Rondae Hollis-Jefferson, someone could be heard saying the scarves are cashmere. Clearly, Serge deals in only the best.

Terence Davis Jr. also shared the "announcement" on his Instagram story as Ibaka was preparing to hand out the scarves.

"Guys, we're' going to New York right? You guys know it's very cold in New York so I got something for you guys," says Ibaka in Davis' video.

So, yeah, it seems Ibaka is pretty keen to make sure everyone knows scarves are his "thing," after all.

The Raptors shared a snap on their own social media of several players donning their snazzy gifts.

Whether or not Ibaka forced them to wear them for the photo needs confirming.

However you slice it, it seems "Big Scarf Energy" season is in full swing in the 6ix right now.

And it also appears OG's trolling of Ibaka is showing no signs of letting up, per Bleacher Report.

The Raptors are 15 games unbeaten, the longest streak in Toronto major-league sports history. Is it "Scarfgate"-related? It's too early to tell for sure. But based on nothing at all, we're saying probably, yes.

The Raps face off against the Brooklyn Nets on Wednesday looking to extend that run further.

If the unbeaten streak and the scarf content both keep coming, who knows where this will all end?