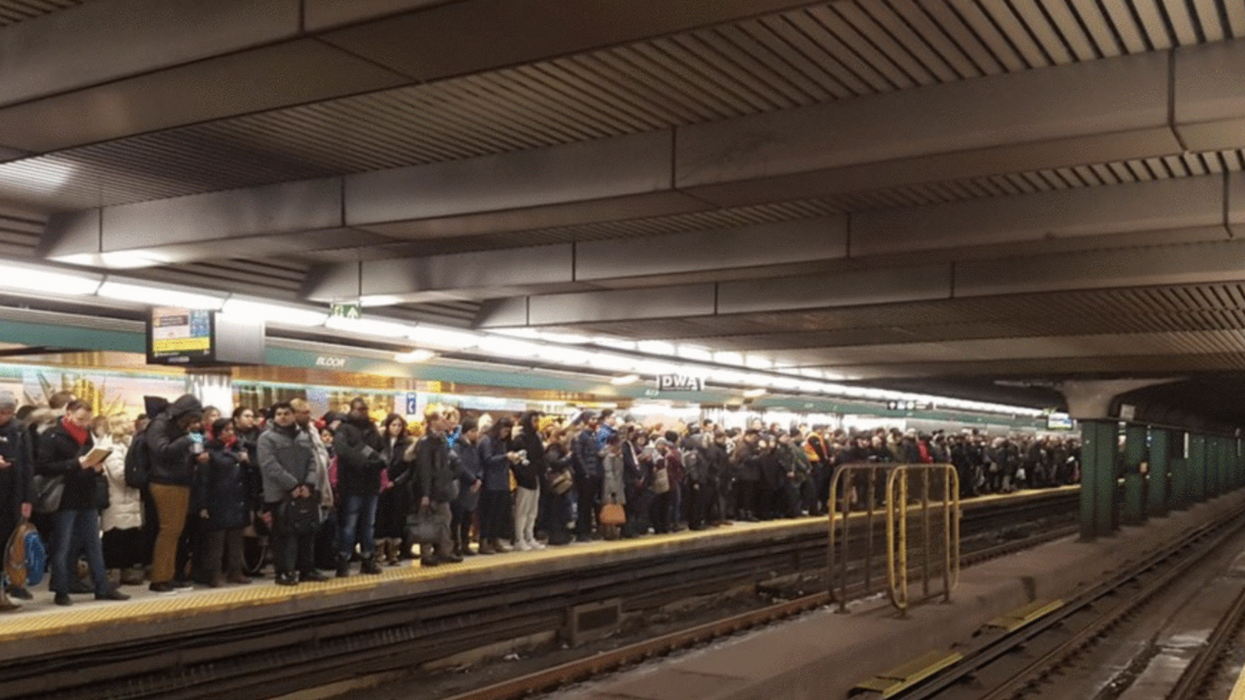 New reports suggest that subway delays as a result of signal problems will continue to plague Toronto's transit system for longer than initially expected. The report, called the Automatic Train Control Re-Baselining and Transit Systems Engineering Review, is set to be presented to the TTC board next week. It suggests that the long-awaited update to the signal system on Line 1 is not only grossly over budget, but actually quite far from completion as well.

As you probably recall, many of the recent transit delays on TTC's Line 1 have come as a result of signal problems. The signal issues themselves often get resolved pretty quickly, but as TTC Communications Specialist Stuart Green has previously pointed out to Narcity, they create a "domino effect" on rush hour train service. Which often results in dangerous overcrowding on trains and platforms as thousands of commuters are forced to wait for regular service to resume.

The new signalling system, called Automatic Train Control (ATC), is now set for completion in September 2022. It was originally slated for completion in 2019. The budget for the project has also been bumped to $661 million, which is $98 million more than the initial budget.

READ ALSO: Toronto Commuters Deem This The Worst Week Ever On The TTC Following Yet Another Massive Delay

The report cites "several challenges" that have "adversely impacted the project schedule", forcing the TTC to push the completion date back by several years. There will also need to be at least 12 TTC subway closures per year in order to complete the ATC system installation by 2022.

Get ready for the long ass waiting times #Toronto #TTC @TTChelps 8:51am pic.twitter.com/KkqF8VHqsz

The carnage from St George station this morning on the coldest day of 2019 so far. The city should change the name from "Toronto Transit Commission" to "Toronto Trash Commission" at this rate. #lol #toronto #ttcsucks #ttc pic.twitter.com/xwCiA6W71S

As far as the TTC's accomplishments with the installation project so far, the report has this to say: "ATC now operates between Vaughan Metropolitan Centre and Dupont Stations, which represents approximately 40% of Line 1. Customers riding southbound from St Clair West to Dupont Station are experiencing an approximate increase of 6% in the number of trains per hour, equivalent to an additional train or 1,100 passengers, more reliable service and fewer delays due to signalling issues."

Narcity reached Green for comment about how the TTC plans to handle signal problem-related delays over the next couple years as installation work continues. He provided the following statement:

Following a months-long review directed by incoming CEO Rick Leary in mid-2018, it was determined that revisions to the ATC project made after the original schedule was drafted were going to extend the timeline and add costs.

We are confident the new schedule and additional funds will result in the project’s completion on Line 1 in 2022. The ATC system provides the TTC with the ability to run a more reliable service for our customers with fewer delays and the ability to run trains closer together to increase capacity on the line and reduce crowding at the busiest times of day.

We are already seeing tangible service benefits on the section of Line 1 between Vaughan Metropolitan Centre and Dupont stations where the system is already active.