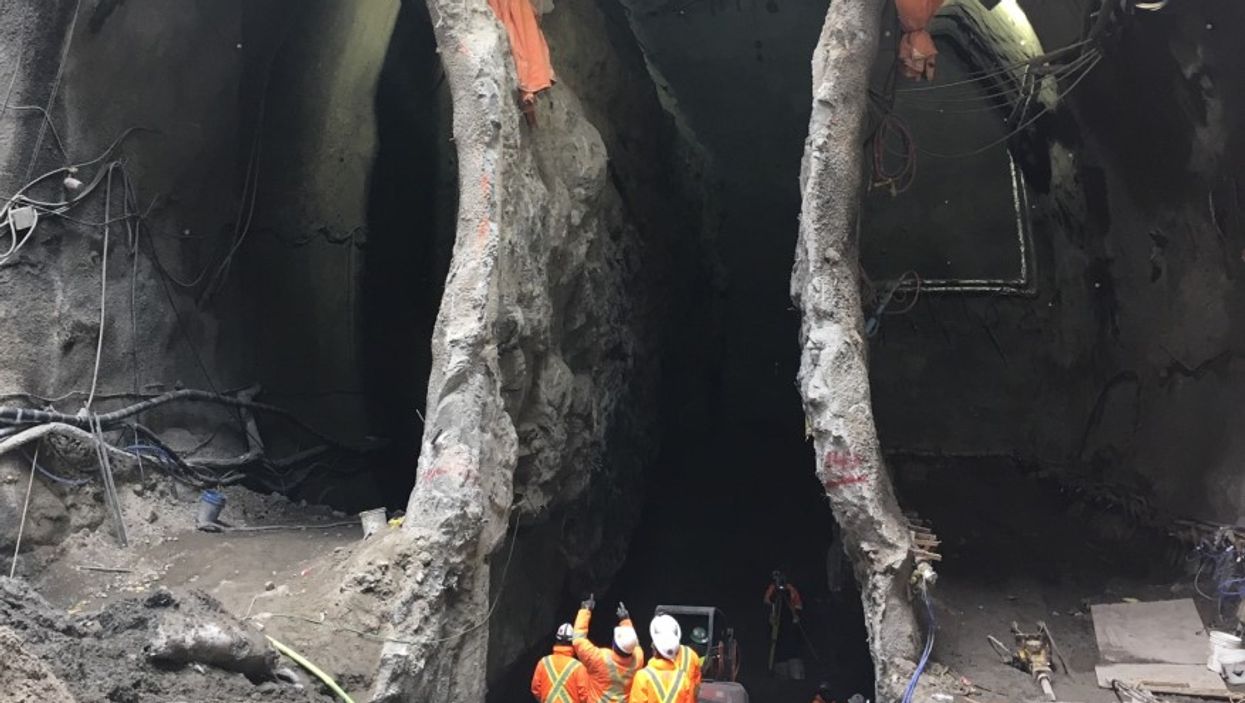 It looks like the long-awaited Eglinton Crosstown LRT project is about to get even more long-awaited. Metrolinx has hit a bump in the road in its plans to have light rail trains fully operational by September 2021. The Eglinton Crosstown is now set to take until "well into" 2022 to be up and running, according to Metrolinx.In a statement issued Tuesday, February 18, Metrolinx revealed that Crosslinx Transit Solutions (CTS), the company building the new transit service, has endured some significant setbacks prior to and during construction. For one, they started building nine months later than planned. One of the factors causing this was the slow finalization of the design plans after the initial contract was approved, according to Metrolinx.They have also noticed a "defect" under Yonge and Eglinton station, which is also causing a delay in further construction.

The Toronto Star reports that issue stems from pipes that were embedded in concrete back in the '50s, when the TTC station was initially built.

CTS, the TTC, and Metrolinx, as well as Infrastructure Ontario, are working together to fix the defective concrete issue, but it will take time. "Ultimately, our goal is to deliver more transit to the region as quickly as possible without compromising safety or quality. Like all transit riders in the region, we are disappointed that the Eglinton Crosstown LRT will not be operational in September 2021,” Metrolinx president and CEO Phil Verster wrote in the press release.

The contract for the project was given the green light as early as July 2015. The Star notes it has already been delayed, having initially been timetabled to open this year, 2020. It was pushed back to 2021 in 2015, shortly after been green-lit.

The statement does note, though, that CTS has "significantly improved its production rate since the 2018 agreement." However, they've only reached 84% of their target so far, which is another reason for the project to be delayed. Metrolinx is hesitant to confirm an exact date of the opening of the LRT because it is not sure if CTS will be able to meet production deadlines in the future. It did confirm, however, that the project remains within budget.

The LRT system is set to have 25 stations above and underground, and they will span along Eglinton Avenue from the east to the west ends of the city, according to Metrolinx.The Venture, which is set to span 19km across the 6ix, is supposed to make travel 60% faster in that part of town, and will allow commuters to travel along Eglinton with ease.

Residents on Twitter, however, do not seem particularly surprised to hear about the latest setback.

"It took NASA and the Americans less time to put a man on the moon than it's taking Toronto to finish the Eglinton LRT," read one critical tweet.

Some people have complained about its construction, however, citing noise pollution issues. And it looks like we will have to wait a little longer to see the benefits this will bring.