The Top 11 Craziest Things That Happened In Toronto In 2015

Only in Toronto could a dead raccoon make international news. 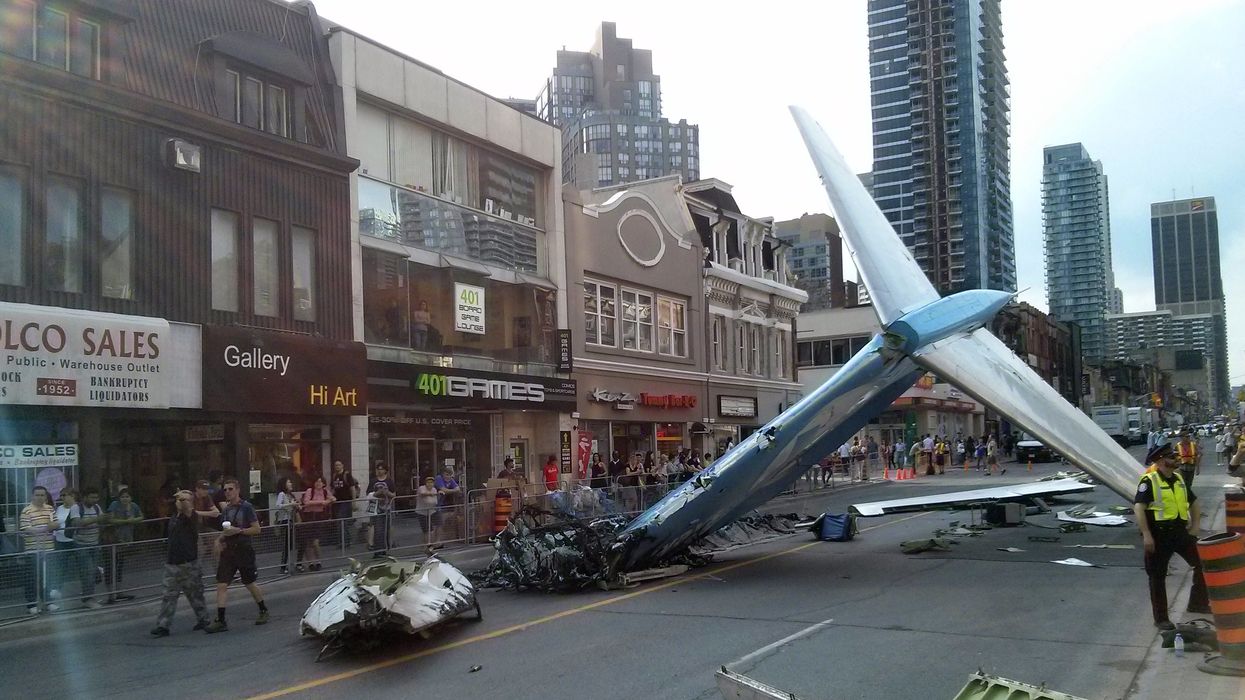 We still made international news this year—even without Rob Ford running the city.  Toronto is a pretty crazy place, so you can imagine all the insanity that goes on within 365 days.

I've rounded up the craziest events and occurrences that sparked a buzz in the 6ix—some of which even got international coverage. Here are the top 11 craziest things that happened in Toronto this year, in order of timeline:

It's impossible to forget the chaos that ensued following the discovery of a 10-metre-long tunnel found near the Rexall Centre in January. The Rexall Centre was intended to be used as the tennis stadium for the PanAm Games in the summer. The mysterious tunnel was soon nicknamed "Toronto's Chamber of Secrets."

There were many claims stating that the bunker was part of a planned terrorist attack on the PanAm Games, and the media went crazy until the builder came forward over a month later in March. The tunnel just ended up being a fun project for Toronto construction worker Elton McDonald, who intended it to be a man cave.

Photo by Tosin Maiyegun via The Varsity

2. The strikes at York and U of T that cancelled classes for a month.

The CUPE strikes that started in February at Ontario's two biggest universities caused an uproar among students. York students were primarily affected, as 3,700 teaching assistants and unionized workers at the university walked away from their jobs on March 3, resulting in the cancellation of all classes for a week.

Some departments refused to start classes again without their teaching assistants, which meant that certain students had classes cancelled for the entire month until CUPE reached a deal with the university on March 31.

While students weren't expected to have everything done as soon as they got back, some of the old deadlines and exam dates were still in place even though students weren't taught all of the necessary materials.

Some students had assignments due well into the month of May as deadlines were pushed back in some cases. In some worst-case scenarios, students even had their acceptances for law school and other graduate programs taken away.

In May, a peacock escaped from his enclosure at the High Park Zoo and paraded across roofs in the West-end for a week. Animal service officers tried for an entire day to capture the peacock, but eventually gave up. The elusive peacock soon became a local sensation as everyone tried to spot him around the neighbourhood. Eventually he returned to his enclosure at the zoo all on his own.

4. The massive crashes Suicide Squad kept staging throughout the downtown.

One of the biggest movies ever filmed in Toronto caused quite the commotion in May among commuters when it shut down two major streets. The making of Suicide Squad starring Will Smith and Jared Leto first shut down part of Yonge Street for a plane crash, followed by a helicopter on Bay Street a week later.

5. The dead raccoon that made international news.

In July, a dead raccoon brought the city together. One morning a citizen found a dead raccoon on the sidewalk at Church and Yonge, and Animal Services was contacted. Around noon the raccoon was still there and people had begun to create a memorial, leaving things like notes and flowers beside it. Someone even printed a photo of a raccoon and framed it.

By the evening, the raccoon had still not been picked up and the hashtag #DeadRaccoonTO had begun to circulate. The raccoon was given a mini candlelight vigil. Finally, after more than 14 hours, the dead raccoon was removed from the sidewalk.

#DeadRaccoonTO became so popular that every media outlet, including TIME, Daily Mail and The Washington Post was talking about it.

Photo by The Canadian Press: Darren Calabrese via CityNews

When it was announced that Kanye West would be headlining the PanAm Games closing ceremony in July, Mayor John Tory responded in a press conference. The full quote from a 680 news story reads:

Awkward. It's possible that John Tory may have mistaken Kanye West for Drake.

7. When Toronto Councillor Norm Kelly sparked the biggest rap battle of all time.

Nobody will ever forget when Toronto's Ward 40 rep Norm Kelly became internationally known overnight for a tweet he put out in July. The tweet was a response to one by rapper Meek Mill, which accused Toronto rapper Drake of having other people write his verses.

Kelly's response reads: "You're no longer welcome in Toronto, @MeekMill." Before the end of the day, the Toronto councillor was all over international news. Kelly's tweet sparked a response from Mill, which led to a Twitter altercation and more dissing of Drake by Mill. The legendary rap battle that followed brought us Drake hits like "Charged Up" and "Back to Back."

Norm Kelly is now a Toronto icon and Drake's bff. He even joined Drake on stage during a surprise concert at Ryerson University in September.

Photo by Nick Lee via Best of Toronto

8. When Digital Dreams and Veld both got cancelled.

The Toronto rave community was majorly let down this summer when not one but two of the biggest music festivals of the year in Toronto were cancelled due to weather conditions. Digital Dreams in June experienced rain both days, and the first day of the festival was cancelled due to torrential downpour. Later in August, Toronto ravers were disappointed a second time when the second day of Veld was cancelled because of a storm.

In early December, 2,500 taxi drivers created a gridlock on Queen and Bay Streets to protest against Toronto Uber drivers. The taxi drivers stood their ground through rush hour until about 7:30pm, when John Tory tweeted out that he would grant them a meeting with the police chief if they cleared the intersection.

The protest also resulted in one injured police officer who was hit by a taxi driver, as well as a viral video of an angry taxi driver. The video shows a taxi driver pointing out an UberX car. He began banging on the window and the Uber started to accelerate while the taxi driver held onto the car door handle.

An ad campaign at Yorkdale Mall made international news by creating a slimmer, sexier version of St. Nick. Model Paul Mason is the face of the character and is now an internet sensation. Mason appeared as Fashion Santa at Yorkdale on several occasions leading up to Christmas, and every time someone took a selfie with him using the hashtag #YorkdaleFashionSanta, the mall donated $1 to SickKids. Even Justin Bieber took a selfie with Fashion Santa.

Since the ad campaign began, media outlets like TIME, Daily Mail, Harper's Bazaar and Cosmopolitan have all reported on Toronto's own Fashion Santa.

Photo by The Canadian Press: Nathan Denette via CP24

11. We all became Beliebers.

Who would have thought that by the end of 2015 we would all be Beliebers?

This is perhaps the biggest plot twist of all time.

The Ontario-born pop star went from spitting on fans from a Toronto hotel balcony to surprising his fans with an intimate acoustic show at the Danforth Music Hall.