If you try to outfox the city, bylaw officers are patrolling! 🦊 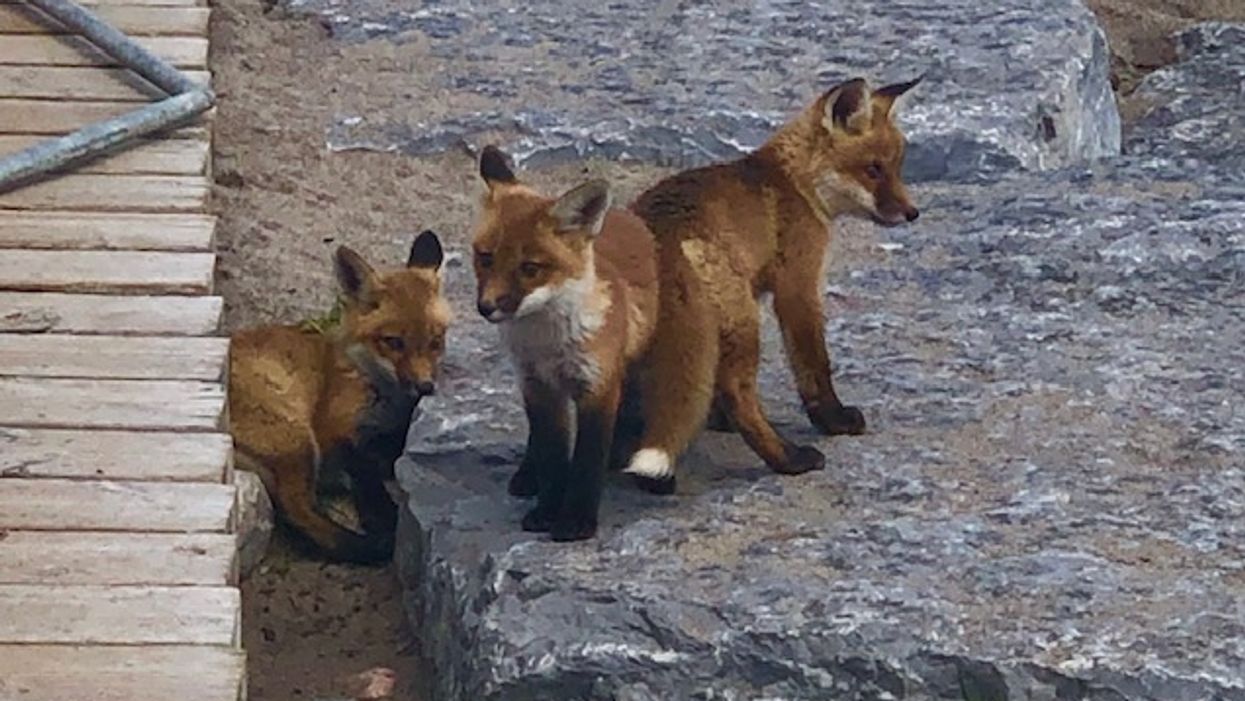 Torontonians looking to get up close and personal with the city's latest favourite residents have just been outfoxed. If you've taken a stroll down the Woodbine Beach boardwalk, then you might have heard or even seen the adorable foxes living underneath. The Toronto fox family has found a home in a section of the boardwalk with far fewer people out in the area recently, but fences are now having to be put up to protect them.

First of all, let us say that, yes, these little furry orange friends are pretty adorable.

But it seems they're almost too cute for their own good.

And now, according to the Toronto Star, a new batch of fencing has had to be erected to keep them safe and untroubled by humans.

In the latest push for the public to leave the furry friends alone, the Toronto Wildlife Centre tweeted a couple of days ago asking people to avoid getting close to the animals for safety reasons.

"People are gathering around and feeding fox kits living under The Beaches boardwalk. Please leave them be — feeding them will negatively affect their development into normal adults," wrote the TWC.

It appears those warnings weren't followed, though.

According to the Star, City staff are putting up more fencing and the TWC is setting up additional high fencing and a barrier.

And Toronto spokesperson Brad Ross even stated that bylaw officers will be patrolling the area to make sure people don't get anywhere close to the animals, via the Star.

It's certainly been a hell of a ride for Toronto's foxy new friends.

With everyone staying indoors, the city has seen an increase in wildlife roaming the streets. And it's no different on Woodbine Beach.

The furry critters were first spotted back in April and even though an initial fence had been placed around the foxes' home on April 24, it seems like they need more.

Photos and video shared onto Twitter in recent weeks have highlighted the crowds of people gathering around to capture the furry family.

@rlautens just sent me this clip of some kits chilling near Woodbine Beach and I might pass out due to cuteness ove… https://t.co/KbE2qXHAnK
— Kelsey Wilson (@Kelsey Wilson)1588357146.0

I finally got to meet the infamous family of foxes living under the boardwalk at the Beaches in #Toronto! https://t.co/x4NNlYCFKG
— Corné Van Hoepen (@Corné Van Hoepen)1588380564.0

These 2 guys? have out ’foxed’ the City of Toronto who R monitoring them while they relax under the boardwalk at Wo… https://t.co/ChxZpjQEdh
— Mitch Markowitz (@Mitch Markowitz)1588696938.0

Toronto Wildlife, The City of Toronto and Mayor John Tory have said to stay away from the foxes at Woodbine Beach.… https://t.co/2S5M71p6PX
— Kris Pangilinan (@Kris Pangilinan)1588760522.0

"(We) will be acting on that today and we will be trying to act on the sort of small crowd scenes because you don’t want a small crowd scene to turn into a big crowd scene,” said Mayor John Tory via CP24 after viewing footage of people crowding around the foxes.

“I find it the most difficult part of this job I have had in six years to be sort of a killjoy telling people not to go down to see something that is very cute and that we don’t have often in a big city," the mayor added.

For what it's worth, the City has an information page on foxes on its website, including about their lifestyle and habitat.

In its daily COVID-19 update on its website, the City warned: "Barricades have now been erected near the fox den and bylaw officers are patrolling the area and encouraging people to not stop to look at the foxes. Dog owners are also reminded to keep their dogs on a leash at all times."*

Give them their space, guys!