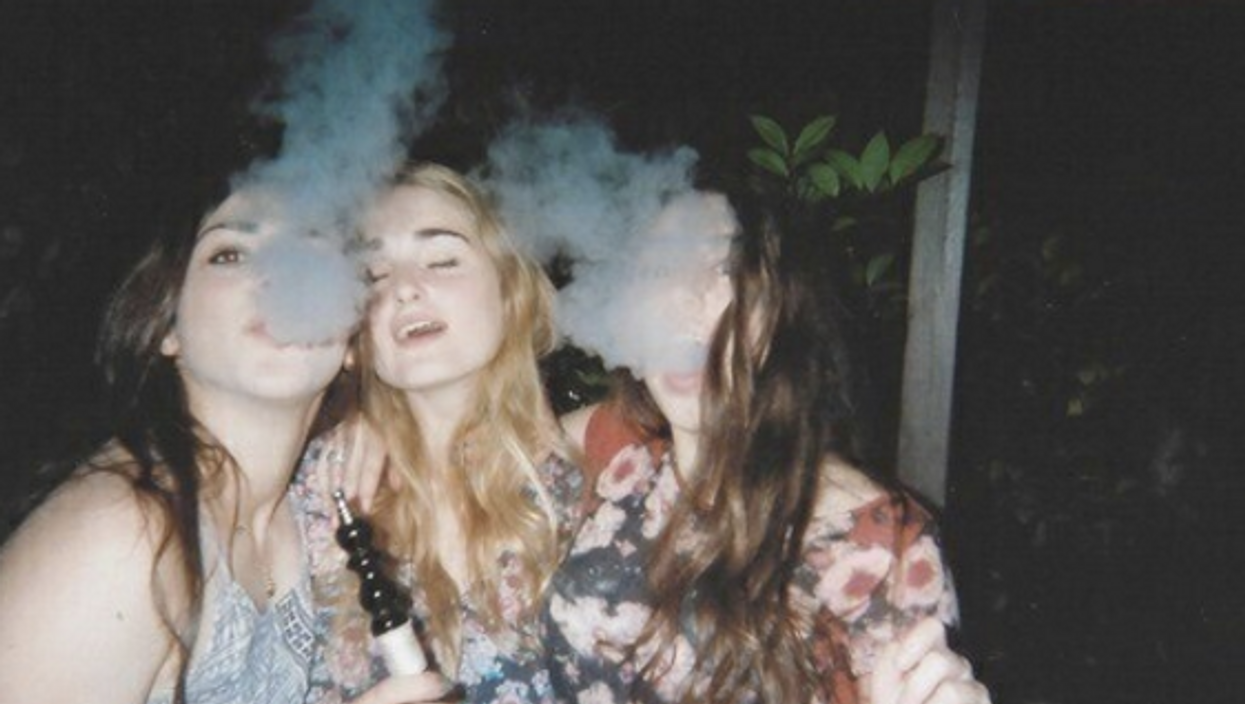 We've all been there. One second, you're having a chill afternoon smoking weed with some friends, and next, you're floating above the couch making animal sounds.

Read More: This Is How Much Weed Would Cost When It Actually Becomes Legal In Canada

This article is dedicated to all of those hilarious times you got just a bit too high and the chaos that ensued afterward.

Read More: Weed-Themed Weddings Are A Thing And We're Not Sure How To Feel About It

"One time, I went to Mcdonald's to satisfy my munchies. I ordered a burger, only to realize in horror that the cashier was smacking her lips at me. I genuinely thought she was preparing to eat me, so I walked backwards slowly and got a friend to grab my burger for me."

"I was in First Year and someone on my floor had weed lollipops. My roommate and I decided to try them out, even though we weren't exactly that experienced with weed. We ate them and didn't feel anything for 20 minutes. Then all of a sudden, we were legitimately floating. We decided to crawl to the dining hall in the snow while making animal noises.

We got poutine and realized we were waaay too high, so we went to our friend's room to ask him to help us. He wasn't there, so we lay outside his door hoping he would come back. We then tried to call people on our floor to come get us, but every time someone would answer the phone, I suddenly lost the ability to form words. Eventually, our friend came back, only to find us lying outside his door covered in poutine. Not our finest hour."

"Well, one time I made out with a plastic doll for 30 minutes. Does that count?"

"One time I ate weed pizza, or 'happy pizza' as its called, in Cambodia before a 7 hour bus ride. One of our friends only had 1 slice, so myself and my other friends had 4 slices each. I passed out still sober the second I got on the bus, only to wake up 7 hours later in a different city stoned out of my mind. I was so high (and so were my friends), I couldn't understand where I was or how I got there.

I was then yelled at by tuk-tuk drivers who kept asking where we were going, but obviously, in my current state I had no idea. I took out my itinerary and stared at the sheet for 20 minutes before understanding what my hostel was called...it was called 'my home'.  Not my home hostel or my home hotel, just MY HOME.  I then proceeded to be high for the next 12 hours."

"I was at a party and I had been drinking, but not a lot. Someone had cannabis oil and offered me a drop, which I had never tried, but thought I might as well. I didn't feel it at all, so my friend gave me another drop. Nothing happened and I just figured it wasn't that strong. I went home and went to sleep, only to wake up I took another drop. Nothing happens, I go home, go to bed only to wake up at 5 A.M. Everything slowed down, including sound. My mum came in to hear me screaming on the ground and called the police. They asked if I wanted to go to the hospital, to which I replied, "Yes!" I was so manic that I had to be RESTRAINED in the ambulance. I kept panicking, so I asked the paramedic to tell me random facts about himself."

"My two roommates decided to make weed brownies one day while I was at work. I came home to find them watching TV Guide laughing hysterically. They stayed like that for an hour."

"This isn't that exciting, but one time when I was high I got fixated on watching bad live Selena Gomez performances. I really can't explain it, but I spent 4 hours in a daze just watching all of her worst performances. You couldn't have pulled me away even if you tried."

"One time, I got high with my boyfriend. Weed doesn't always hit me that well, so I got uncomfortably high and genuinely thought I was dying. My boyfriend tried to make me feel better by saying, "I'm sorry this is happening." I interpreted that as him knowing I was dying and was apologizing that his weed was killing me. That's not actually that funny...just sad."

"The first time I ever smoked from a bong, I blacked out the entire night and woke up utterly covered in Doritos."

Getting legal marijuana in Denver, Colorado, is about to become even simpler thanks to the city council's latest decision.

On Monday, the council passed a bill that would make marijuana consumption both easier and more acceptable in the Mile High City this summer, with the first being related to marijuana delivery.

Get your bong out because it's about to get trippy in here.
mamasbuds | Instagram,emilyyyerinnn | Instagram

In 2018, Michigan became one of eleven states to legalize weed for recreational use, but the tradition of marijuana in Ann Arbor has been going on for a lot longer than that. Hash Bash, which is returning this spring, is the ultimate stop for any pothead.

Since the event is held in April, people often assume that it's going to be on the 20th (insert 4/20 joke here), but it's actually always on the first Saturday of the month.

While recreational marijuana isn't legal in the Sunshine State yet, there's no crime in getting the munchies. Whether you find yourself craving something over the top mid-day or late at night on a weekend when you're too drunk to drive & busy binging Netflix shows, there's one stoner themed spot that seeks to satisfy the biggest cravings, the Munchies 420 Cafe in Sarasota.

This cute little joint sits on the corner of Superior Ave and Golf Gate Drive, opening at 4:20 p.m. & staying open as late as 4:20 a.m. on the weekends. Whether you want to eat inside their 420 clad spot, sit out in the tiki area with the tunes, or have your goodies delivered if you're in their delivery area, this munchie bustin' cafe has you covered.

Snoop Dogg Is Bringing His Cannabis Company To Canada

Snoop Dogg (aka Snoop Lion) might just be the most vocal celebrity when it comes to his love, promotion, and passion to smoking weed everyday.  The 45 year old rapper and entrepreneur has notably admitted to smoking 81 blunts a day. Least to say, he takes his marijuana very seriously.

With Canada's decision to legalize weed nationwide, it's really no surprise that the mogul and cannabis connoisseur has found a way to break into the Canadian marijuana market.