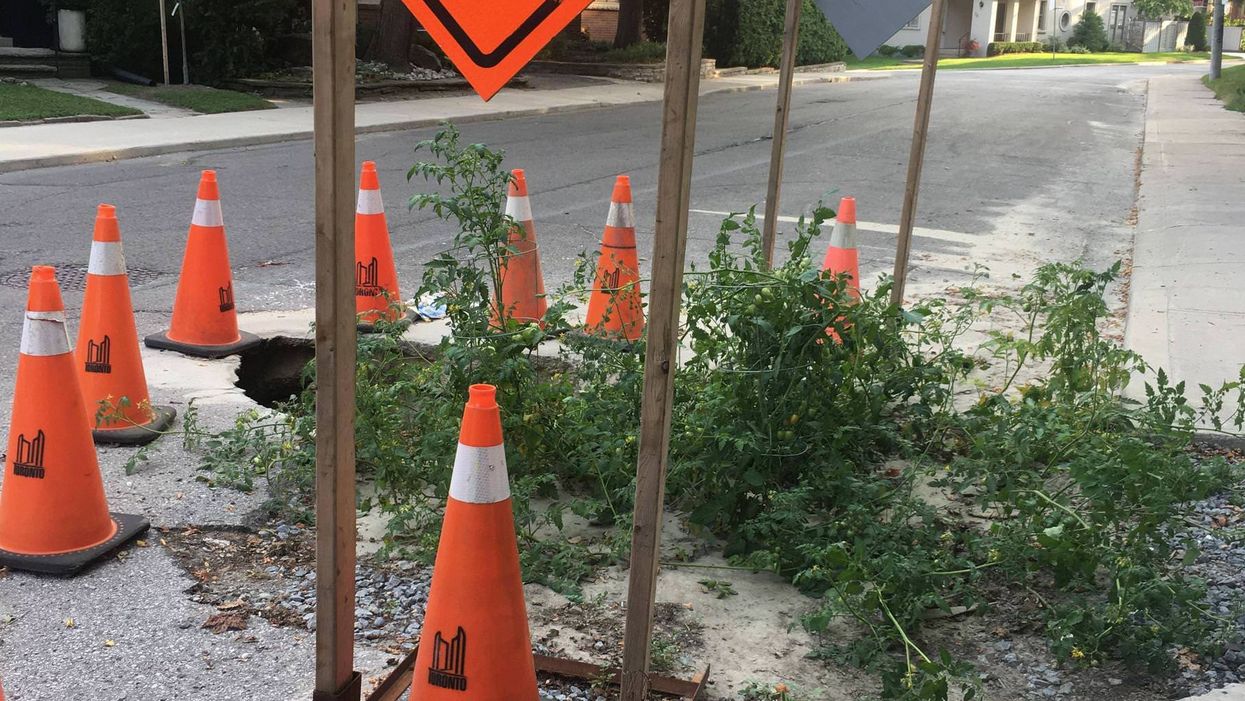 Summer in Canada is always a busy time and it can become easy for Canadians to forget about their day to day requirements when lost in the hustle and bustle of the hot and hectic summer months.

READ MORE: A Canadian Man Had The Best Response To People Trespassing On His Property

But for one group of Canadians, this summer has meant waiting for the City of Toronto to make a repair to their road after a sinkhole ripped open their street earlier this year.

But don't worry, they had the best response for the city's delays and now it's going viral on Reddit.

Two photos were posted on Reddit on Wednesday night that shows tomato plants growing out of what was originally a sinkhole. Due to the delay in city repairs, residents on the street believed that this would be a good use of the extra space.

The tomato sinkhole can be found on Poplar Plains Crescent nearby the TTC's Summerhill Subway station. Residents told Brandon Rowe of City News Toronto that the idea came up to see how long it would take for the city to actually fix the massive crater.

READ MORE: An Intruder Tried To Kidnap A Canadian Woman's Baby With A Butcher's Knife (VIDEO)

Another resident of the street told Rowe that it had already been an issue on the road for months at this point.

No this isn’t a community garden! Some fed up residents in the Summerhill area planted tomatoes in this sinkhole as they wait for the city to fix it. One woman tells me that the crater has been on Poplar Plains Cres. for months now. @CityNews pic.twitter.com/bXiVMhGdrF

Many Canadians have commented on the thread to point out just how hilarious this situation is and really, how Canadian it is to make the best out of the bad situation.

Of course, a couple of jokes were included because why not laugh at your own city's inability to fix the roads!

One Canadian pointed out that come October the Poplar Plains Cres. residents could start a new business as cannabis entrepreneurs.

Either way, it's nice to see some Canadians make the best out of a bad situation, especially with something as wholesome as gardening.

Still, it would be nice to see the city of Toronto step up and actually fix the sinkholes on the street. Considering it's a safety concern, let's hope this tomato garden is only available for 2018.