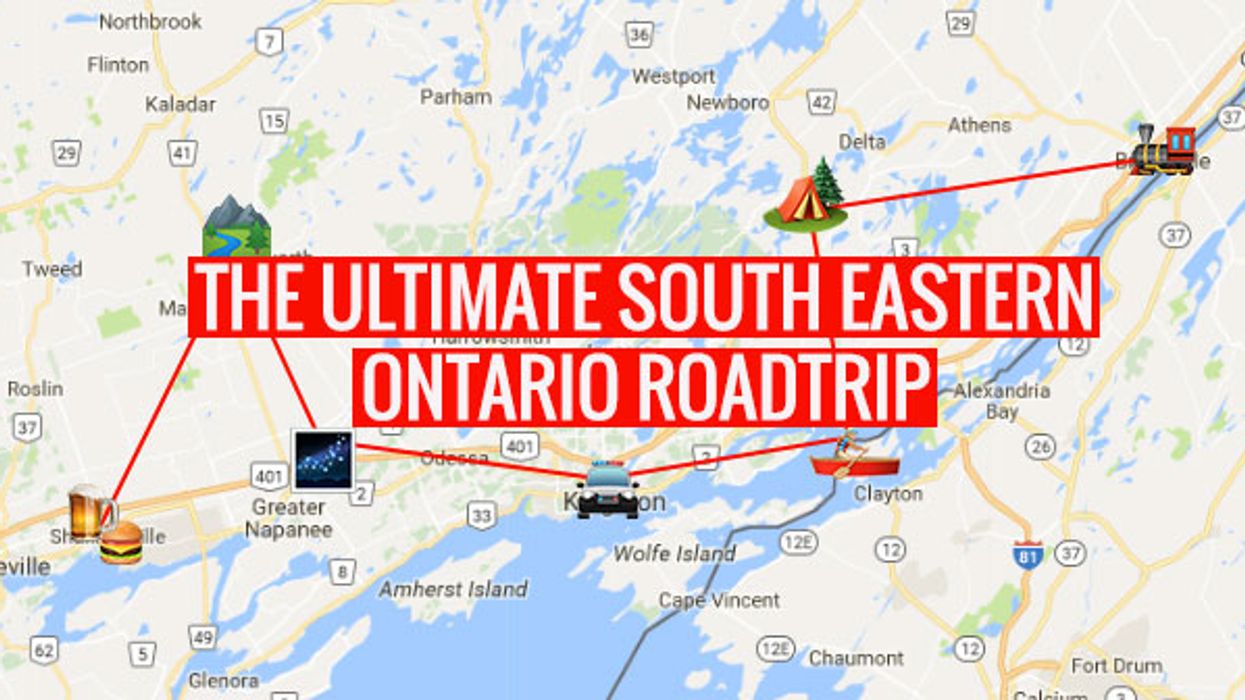 Daydream about the perfect summer destination and your mind will probably trail off to the sandy shores of South America, or maybe the narrow alleyways and sparkling rivers of Europe. While both of those continents are undoubtedly beautiful, it turns out you don't actually have to leave Ontario to find charming islands, turquoise bays and white beaches that stretch on forever. South Eastern Ontario has it all. Whether you're looking to take a leisurely cruise down a peaceful river, explore award-winning wineries, trek through endless hiking trails, jump out of a plane over breathtaking views or scuba dive to the depths of the nearest lake, there's plenty to do in South Eastern Ontario.

Plan a getaway brimming with activities or just to relax. Whatever you decide, the scenery is always breathtaking and your day will always be jam-packed with incredible things to do. Here are 11 places in South Eastern Ontario you should not miss this summer! Be sure to bring your flashlight and a bit of courage with you: You can descend 7.5 metres to the depths of the Devil's Horse Stable Cave that widens into a 2.5 x 2.5 metre cavern. If descending into the deep depths of the abyss isn't your thing, this nature trail also lets you step back in time to explore the rock formations that were created during the glacial period. This natural rock formation on Botswick Island has been transformed into a summer place of worship. On Sunday afternoons during the summer, worshipers kayak to Half Moon Bay's open-air "cathedral" and remain in their boats to sing hymns, listen to guest speakers and participate in services.

Visit Canada's first and oldest railway tunnel, which begins at Blockhouse Island in Brockville and runs for several blocks under the city to the waterfront!

This wilderness area has three main trails: The Cabin Trail, an easy 1.3km walk past a beaver pond and through a white pine plantation; the Morton Bay Loop (2km), which has two moderately steep sections to and from a peninsular with spectacular views over Morton Bay; and the Summit Loop, a 3.9km climb through forest with sneak peaks over rocky cliffs. The summit has a panoramic view of the Rideau Waterway. Scuba divers don't call the 1000 Islands the "Caribbean of the North" for nothing. The waters clean, fresh and, at some sites, have up to 100 metres of visibility.

In Brockville, Canada's first underwater sculpture park is just off Centeen Park. The focal point is six standing human figures looking up surrounded by benches at an 18-foot radius. It's harder than ever to find a patch of clear night sky in Southern Ontario. With more light and pollution than ever, stargazing is quickly becoming a thing of the past - but not in Lennox and Addington.

If you head just twenty minutes north of Napanee, you'll find the Dark Sky Viewing Area: The most southerly dark sky site in the province. This is stargazing done right.

Located at the birthplace of the Correctional Service of Canada, this award-winning museum is dedicated to the preservation of the history of our federal penitentiaries.

But it's not just about crime and punishment, you can learn about the forward-thinking arts program introduced in the 1950s and see an unparalleled collection of artifacts and photographs. The best part? You don't even have to walk! Kingston Trolley Tours offers Hop On, Hop Off tours of Kingston (including the penitentiary) aboard thirty-two passenger trolleys. Do you love cheese and craft beer? Then you won't want to skip out on the Bay of Quinte. The region is known for its fishing and love of cheese, veggies and other bounty its farmers produce.

If you really love cheese and beer, then try this out: A self-guided tour of the Bay of Quinte region's breweries, cideries (there are 12) and cheese factories. These routes span from Campbellford to Wilton and from Tweed to Cressy!

Peacefully Cruise Past Castles Around the 1000 Islands... Climb aboard a boat cruise to see South Eastern Ontario in a different light. Way back when, the St. Lawrence River in the 1000 Islands was patrolled by pirates and bootleggers, but today it's a sightseer's paradise. Check out Gananoque Boat Line and Rockport Cruises in the 1000 Islands, which takes in the romantically tragic Boldt Castle and offers dinner and event cruises.

Their unique cruising experience also details the history of the St. Lawrence River's shipwrecks with diver video footage and commentary when the vessel glides over any wrecks silently lying on the river bed below.

... Or Speed Past Them with Wildcat Cruises

Let's face it: Slowly drifting peacefully down waterways isn't for everyone. Sometimes you'd rather whiz past them with the wind in your hair. WildCat Cruises offers two cruises. The first, a 2-hour "Castle Prowler AdrenIsland" cruise covering 48 miles and featuring views of Boldt and Singer Castles as well as three lighthouses.

The other is a 1-hour "Single Castle Express" which travels 24 miles of the islands and offers up views of Singer Castle and the historic Crossover Island Lighthouse. Both happen in a 54-passenger high-speed catamaran that'll whiz you down the river at an average speed of 36 to 38 miles per hour.

Cornwall And The Counties

Fun fact: Cornwall and The Counties is home to one of the oldest surviving buildings in Ontario - and if you're a history buff, you're absolutely going to want to check out this South Eastern Ontario spot.

Why? Cornwall and The Counties is home to many Canadian historical feats, like the Saint Raphael Ruins. In 1970, a fire spread throughout St. Raphael's Church (one of the earliest Roman Catholic churches in English-speaking Canada). The outer walls were spared from the fire though, and today it's actually a National Historic Site of Canada! If you're looking for adrenaline-pumping experiences in South Eastern Ontario, it'll be tough to beat this one.

Whether it's your first time throwing yourself out of a plane or your hundredth time, Skydive Gananoque can make your free-falling experience memorable and get you back down on the ground safely. They've been around since 1971, so you know you're in good hands. Plus, you'll get one of the best views of the Thousand Islands.