A spooky adventure through the Empire State. 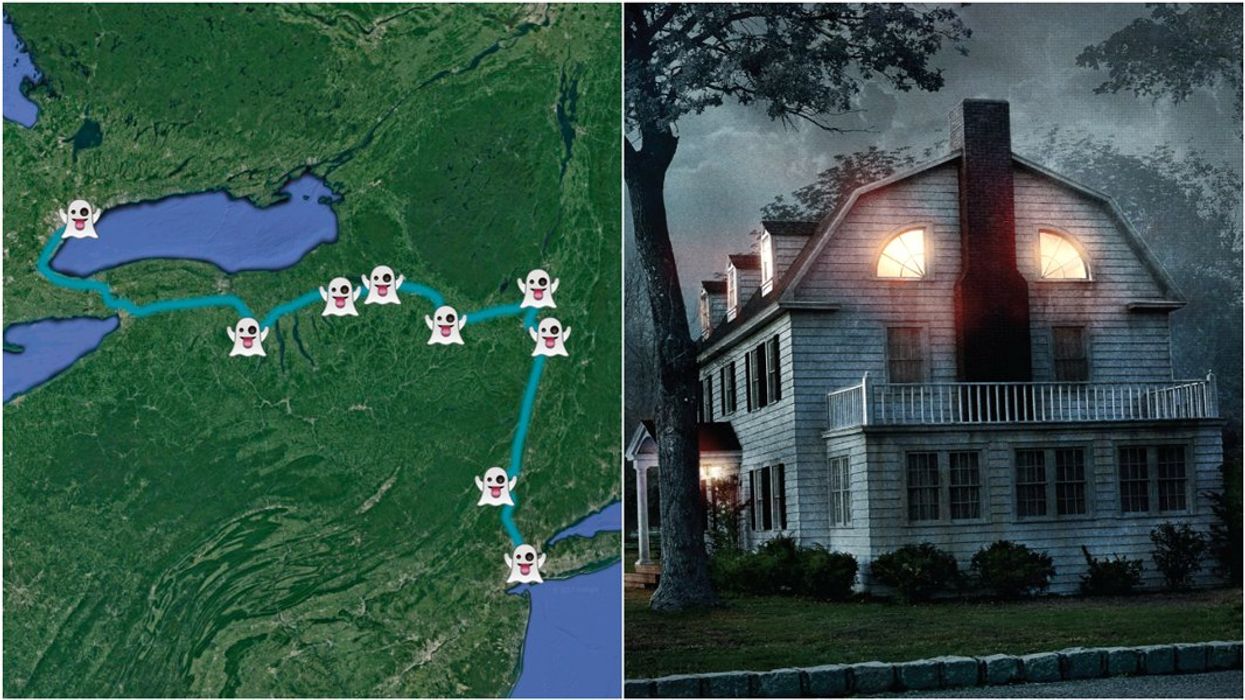 With October quickly approaching, many are beginning to get into the Halloween spirit. Most people like to celebrate the spooky holiday with a scary movie or by visiting a haunted house at a horror theme park. But if you're looking for something more exciting, you should consider going on a haunted road trip!

The following map takes you on a haunted adventure from Toronto to New York City. You'll be brought to eight of the most haunted places in New York State, from ghost-infested theatres to eerie forest parks. You will need a weekend to complete the trip as it entails 14 hours on the road, but it'll be totally worth it for the spooks.

Spook Hill is a hotspot for paranormal activity. If you put your car on neutral at the bottom of the hill, your car will creepily start to roll backwards up the slope. Legend has it that spirits are responsible for pushing your car up the hill (it is located near an ancient Native American burial ground).

Landmark Theatre is the most famous haunted venue in the city. It is believed to be the home of the ghost of a woman Clarissa, who fell of a balcony to her death in 1930. Visitors are able to take ghost tours of the theatre every October, or by reservation.

Sylvan Beach Amusement Park was once explored by Syfy's Ghost Hunters, who came across major paranormal activity in 2012. The park is open from May to October and offers guided "park after dark" tours of the most haunted spots on site.

The Otesaga Resort Hotel is a 106-year-old building that was once a school for young girls between 1920 and 1954. Reports of ghostly children playing, giggling and even calling out passerbys by name have been reported. Rooms 307 and 585 are known to be particularly haunted with friendly spirits.

Canfield Casino is part of a Saratoga resort and serves as a popular venue for weddings. However, it is also a hub for ghostly activity - incidences of cold energy, moving objects, hair pulling, touching and electromagnetic activity have all been reported on the third floor. Many believe a lady in a Victorian dress haunts the grounds of the casino.

Vale Park's 150-year-old cemetery is allegedly one of the most haunted places in the United States. Past visitors have reported eerie sights, including statues that bleed from their eyes, ghostly figures around gravestones, and the sound of shrieking and singing on the ground. Public tours are offered between April and November.

Forest Park consists of a cemetery from the 1800s known as Pinewoods. The cemetery has deteriorated over the years, having been subject to stone degradation and vandalism. Many have reported of cold spots, sounds of children's laughter, and unfriendly forces in the area.

Letchworth Village is a 2,300-acre site that once served as a mental health facility for children and adults. Over the years, the Letchworth facility gained a reputation for vile mistreatment of its patients, which included leaving patients covered in filth, food plagues and diseases. The ghosts of dead patients haunt this site, and while it has been made off-limits to the public, many courageous souls still venture into the village and explore it.