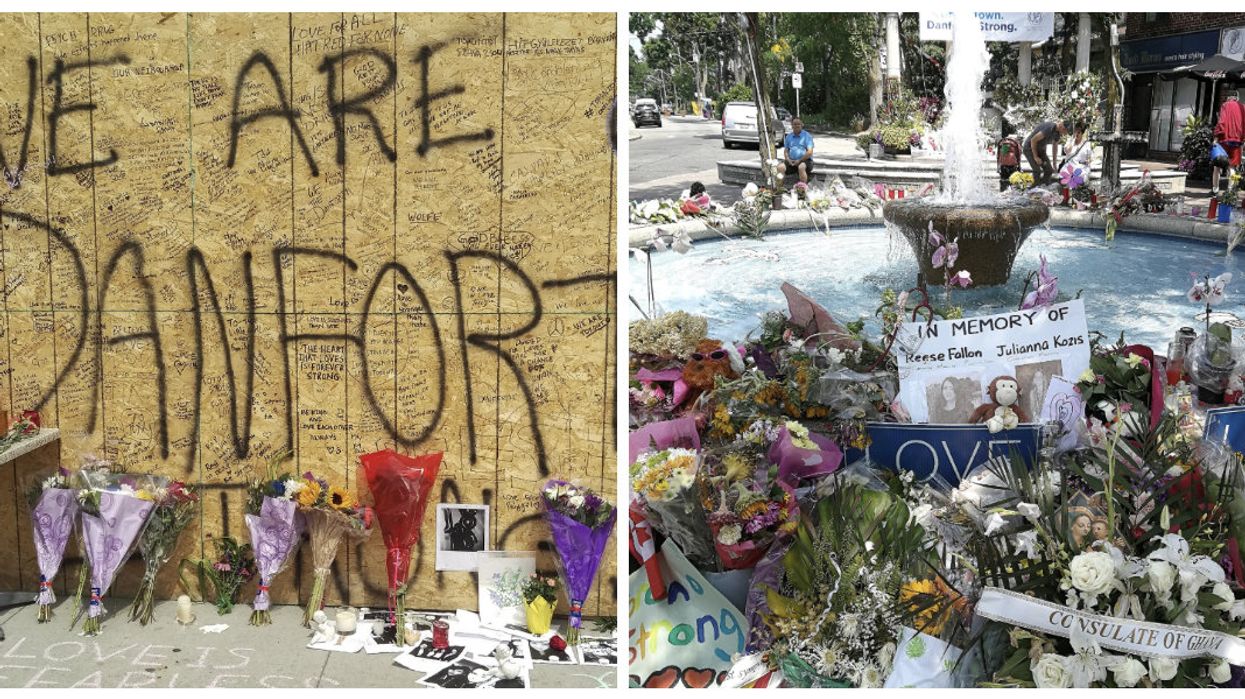 Torontonians will come together Monday evening to remember the victims of the tragic shooting on the Danforth last July. A Toronto Danforth shooting vigil will begin at 8:51 PM on July 22, the exact time that the gunman opened fire in Greektown. The vigil will be held at the Alexander The Great Parkette, marking one year since the tragedy that took the lives of two people and injured 13 others.

According to 680 News, the names of both victims, 10 year old Julianna Kozis and eighteen year old Reese Fallon, will be read aloud during the vigil. The ceremony will be held in the same parkette where Fallon and her friends were located when she lost her life.

Church bells will ring to commemorate the event, and the community will hold a moment of silence to honour the two victims.

Residents of the Danforth have decorated the neighbourhood ahead of the vigil. Flowers, candles and touching tributes to the victims of the tragedy cover the streets of the east end neighbourhood, known for its delicious cuisine and small-town atmosphere:

Thinking today of all those affected by the #Danforthshooting. The victims, their families, the survivors, the witn… https://t.co/VYaLw9ejGh
— Caryn Lieberman (@Caryn Lieberman)1563796289.0

I've lived in the Danforth for 4 yrs. It's streets the backdrop to my walks and runs daily. It's stores, restaurant… https://t.co/oydkJw5kJn
— Derek Robertson (@Derek Robertson)1563800313.0

On this 1st anniversary of the crime that shattered my neighbourhood, let us remember the victims & their loved one… https://t.co/cYZmWqoLq2
— Tom Harrington (@Tom Harrington)1563805335.0

Today, we honour the memory of Reese Fallon and Julianna Kozis. We also honour their families and friends, whose li… https://t.co/ocWG2jrWKJ
— Doug Ford (@Doug Ford)1563800957.0

My statement on the one-year commemoration of the Danforth tragedy. #DanforthStrong https://t.co/HFLakmKjLg
— John Tory (@John Tory)1563786656.0

According to The Toronto Sun, a charitable organization was created in the memory of Kozis last month. The charity, which is called The Just Do Kindness Foundation, aims to help children in need while also honouring the memory of the kind-hearted 10-year-old.

“The Just Do Kindness Foundation has been created to honour the memory of Julianna and the kindness she embodied in life to keep her light shining and to inspire others to be kind,” says an online donation page set up by the Trentadue Torres Team and Kozis' family members.

Fallon’s family also reflected on the loss of their loved one. The family stated that they had accepted the fact that they will never truly have closure.

“We have accepted that we will never have closure on this,” said Reese’s Mother. Claudine Fallon said in a heart-wrenching statement to Beach Metro.

“We’ll never have peace. We have to focus on our family and our friends. For us to have hate or anger does nothing. We need to direct our emotions elsewhere. All our emotions are taken up dealing with this loss.”