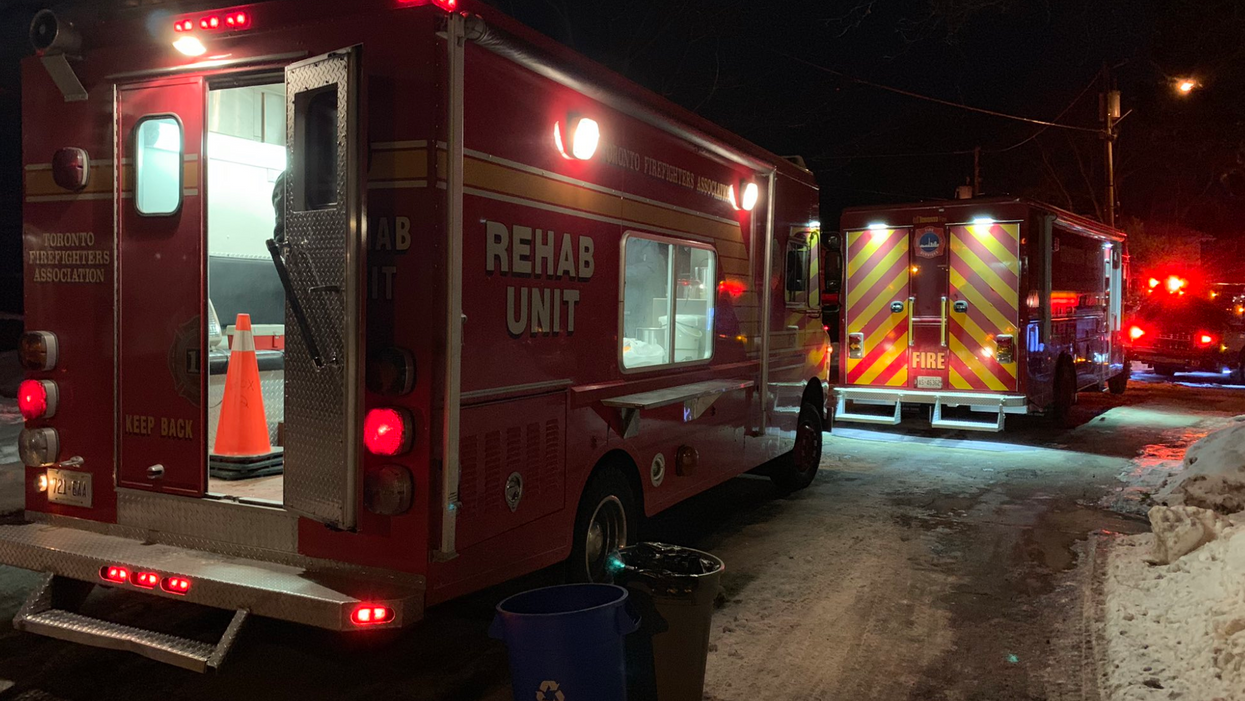 A fire that began in the Lawrence Park area of Toronto late Thursday night hasn't stopped burning, fire crews report to CP24.  At around 7:00 PM on Thursday night, a basement fire erupted on Rochester Avenue in the Lawrence and Bayview area of Toronto.  The home was under construction at the time the fire broke out. The blaze still hasn't been fully extinguished by firefighters, despite their intensive and laborious attempts to combat the fire's rapid spread.

According to fire crews, the fire's flames and smoke continued to remain visible from the house's exterior as late as 4:00 AM this morning.  Thankfully, the fire is believed to be "mostly contained" now.  However, crews are reportedly still having challenges locating and accessing the fire's core.

Doug Harper, Acting Division Commander, explained to CP24that although firefighters had originally attempted to extinguish the fire from within the 5,000 square foot house, eventually, crews were forced to evacuate the premises. Instead, firefighters pulled back to a "defensive position" after 20 minutes, due to the house's "lightweight construction".

Toronto fire battled a stubborn 3-alarm blaze at a home under construction on Rochester Avenue near Bayview and Lawrence. Approximately 15 fire trucks and 60 firefighters fought the blaze. No one was inside the building at the time of the fire and no injuries have been reported. pic.twitter.com/DZifoyXnw8

READ ALSO: The 22-Year-Old Victim Of Yesterday's Massive Fire In Toronto Has Been Identified

Harper commented that a six-alarm response is currently in place to accommodate the firefighters' physical limitations amid the extreme cold, requiring crews to be regularly swapped out.  He also suggested that heavy ice buildup had further complicated the situation for fire crews.

A number of TTC buses were transported to the scene of the fire to offer firefighters shelter and warmth as they continued to extinguish the blaze.

Toronto fire battled a stubborn 3-alarm blaze at a home under construction on Rochester Avenue near Bayview and Lawrence. Approximately 15 fire trucks and 60 firefighters fought the blaze. No one was inside the building at the time of the fire and no injuries have been reported. pic.twitter.com/DZifoyXnw8

READ ALSO: Toronto Firefighters Are Battling A Five-Alarm Fire That Is Threatening To Spread To Other Buildings

"The good news is no firefighter has been injured tonight which is great news but it is a challenge," he said to CP24. "Everything from the ladder work, you see the crews up on the roof, that is a real challenge for our staff. The guys are working cautiously and we are very aware of the environment."

"It could be a very long day," Harper reported to the press. "We might need some heavy equipment for the simple reason that we have been applying the water but because of the construction and the way it (the structure) collapses we just can’t get to the voids where the fire still is."