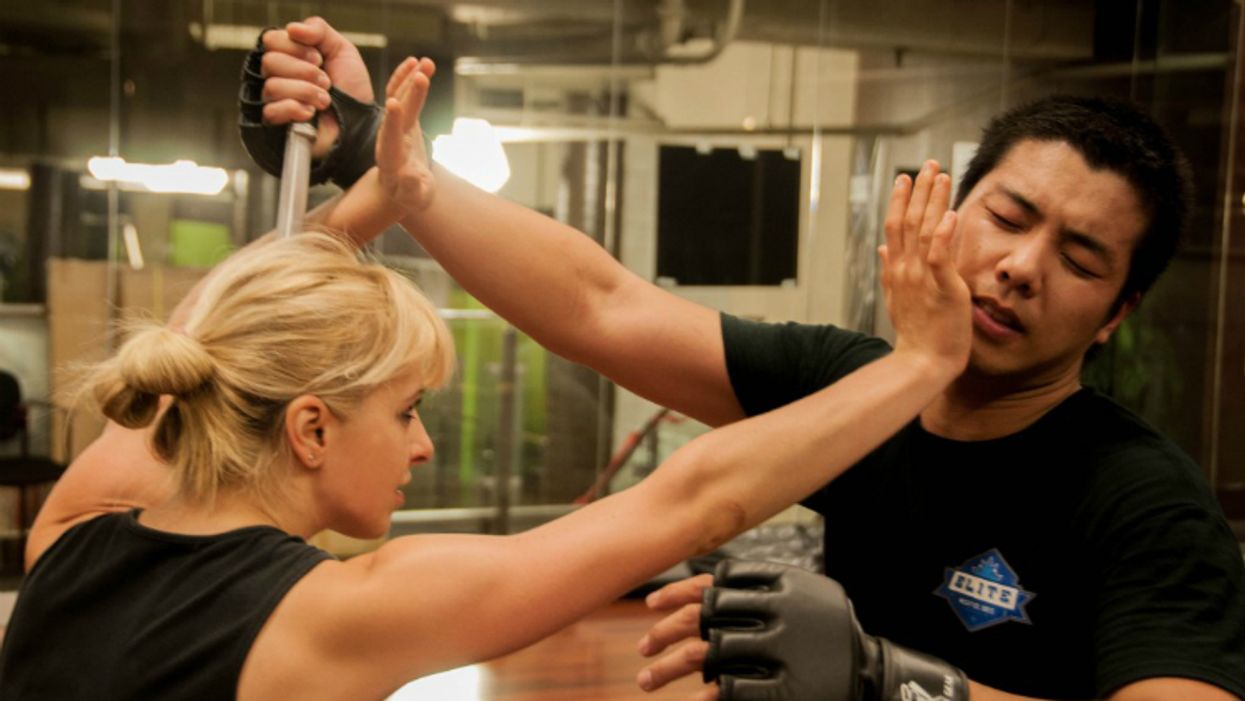 Going to the gym is a great way to stay in shape, but if you find yourself in a street-bawl situation, your opponent isn't going to stop and ask you how much you can bench. Toronto's newest Krav Maga Training Centre not only ups your health game, but it also teaches you effective and powerful self-defense, which you can put into action in the real world.

The multiple award-winning Elite Martial Arts, which already has locations in Mississauga and Downtown Toronto, is opening a brand new Krav Maga training centre in the Keele and 401 area.

Certified by the Krav Maga Association of Canada, they hope to inspire a whole new neighbourhood to learn these kick-ass skills, and trust us, they are the only place you'll want to train - all of their instructors are Krav Maga beasts!

Krav Maga (Hebrew for "contact combat") is a self-defense system developed for and used by the Israeli Defence Forces. Unlike other MMA practices, Krav Maga is based around the idea that in a street fight there are no rules - to win a dirty fight, you gotta fight dirty!

Don't get it twisted - the classes aren't designed to encourage street fights, but they do prepare you to protect, attack, and survive, no matter who you're up against. With each class, you not only get stronger, but you also get smarter, learning techniques for pretty much any situation, from taking on multiple attackers, to defending against weapons and most people will get the basics down in next to no time.

The best thing about Krav Maga is that absolutely anyone can learn it regardless of age, gender, physical build, or previous experience. Imagine a David vs. Goliath situation - well-placed hits that cause maximum impact, means any would-be assailant won't stand a chance against you.

Their latest training centre, catering to residents in Toronto's west, is owned and operated by Lawrence Chan, who was personally trained by the founder of Elite Martial Arts, Dan Novak, so you'll be training with the best.

Elite Martial Arts was founded on a deep passion for Krav Maga, and it really shows. They're considered the top training centre in Toronto and the GTA and it's clear why - the energy and enthusiasm of their instructors is infectious.

As well as being great at preparing you for virtually any street fight situation, Krav Maga classes are a full body workout, with a specific focus on core strength and conditioning. This is more than just a self-defense class.

The sessions are welcoming and supportive for newcomers and experienced martial artists alike, being a newbie is really no excuse!

In addition to their award winning Krav Maga program, Elite also offers an excellent variety of supplementary programs such as Elite Conditioning (30 minute full body workout), weapons defense & sparring and is also a certified Muay Thai affiliate of SiamNo1, Canada’s longest running Muay Thai school.  For their female students, Elite offers a monthly Women’s Self Defense seminar, which is FREE to the general public but space is limited so contact them today!

Check out the Elite Martial Arts website or Facebook page for more information about all of the classes they offer, book a free first session, and take the first step to becoming a total bad-ass.