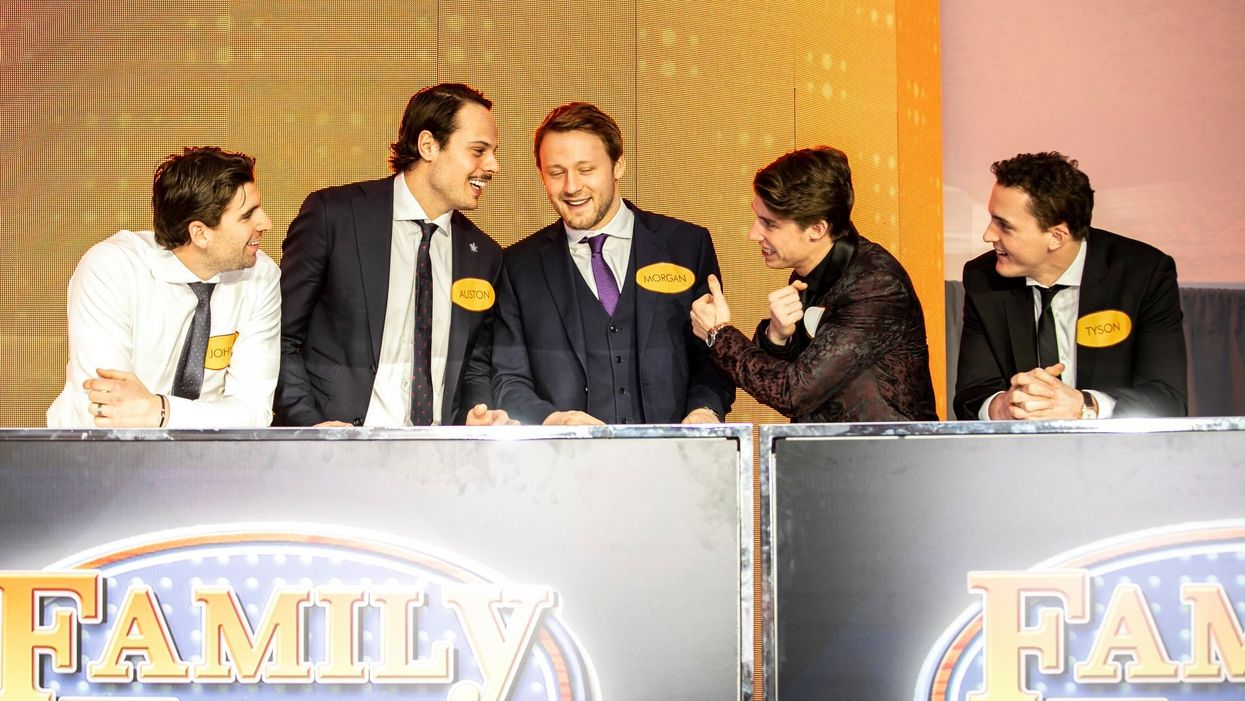 Whether it’s between players on the ice or stemming from a long-standing team rivalry, we’ve all seen our fair share of feuding in hockey. But Toronto's hockey stars took things to a whole new level with an already-iconic Toronto Maple Leafs Family Feud appearance that fans simply can’t get enough of.

As a part of the annual A Night With Blue & White event in support of the MLSE Foundation, some of the team’s leading stars went head to head Family Feud-style with Leafs from years past.

The game was hosted by Sportsnet hockey reporter Elliotte Friedman, who did his best to step into the shoes of regular Family Feud Canada host Gerry Dee.

In a short video clip featured on the Maple Leafs' Twitter account, you can see Auston Matthews, John Tavares, Morgan Rielly, Tyson Barrie, and Mitch Marner try to find the answer to “What's the first thing a hockey player does in the morning?”

The team of retired Leafs, featuring stars like Darcy Tucker and Doug Gilmour, went for a seemingly obvious answer in “stretch.”

But that answer saw nothing but red Xs all across the board, much to the vets' frustration.

The current stars of the team went for a more millennial answer and, survey says, it paid off big time.

"Check their phone" was one of the top three answers on the board. It is 2020, after all.

"Visit the bathroom" and "get a coffee" also made the cut. Sounds about right to us, to be honest.

You can consider us jealous.

While the event held on Thursday, January 9 was for a good cause, fans were instantly freaking out over the wholesome content, begging for more of it.

Some even offered to pay in order to see the full video.

Of course, some fans took the opportunity to poke a little fun at the mash-up.

Above all else, though, everyone was just excited to see the two worlds collide.

We reckon some of these fans are secretly hoping for a slip-up in the same vein as the Popeyes' chicken answer which became instantly world-famous last week.

Even if we never get to see the full game in all its glory, the Leafs fanbase has been spoiled with non-hockey content as of late.

Just last week, the team was seen taking the TTC to practice where they brought their furry BFFs out for a skate.

Speaking of fur babies, the Leafs are no strangers to showing off their adorable pups. Don’t believe us? Here's 29 amazing photos of the team being the best doggo dads out there.

If fans have learned anything recently, it's to keep their eyes on the team's socials. You never know when the next too-sweet-to-handle post is coming.