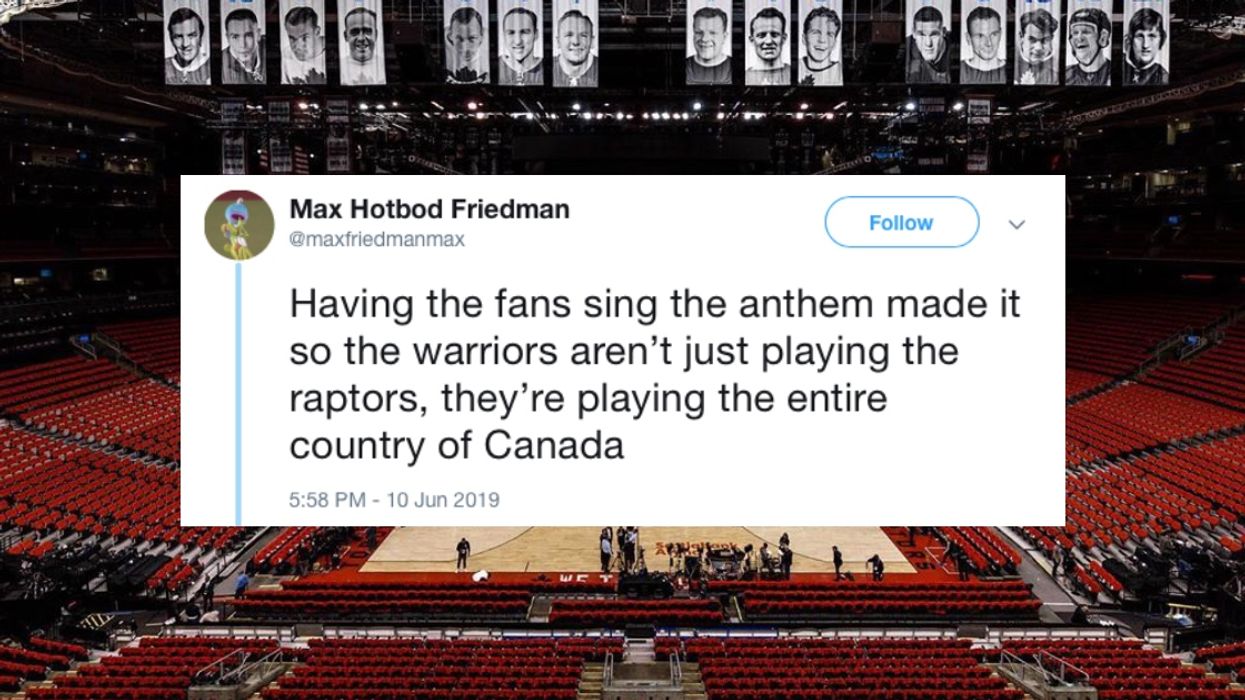 Today is finally the day. Game 5 of Raptors versus Warriors is currently underway and people all over Canada are living their best lives and cheering on the team. This time, the Toronto Raptors game's Canadian national anthem performance was sung by a crowd full of fans and it was everything that everyone wanted. Needless to say, people were way more thrilled with this than the anthem performances at previous games.

Last Wednesday, Game 3 took place against the Raptors and the Warriors. During the opening of the game, Canadians were a little less than enthused when a Saskatchewan-born singer Tenille Arts took over the mic.

During Game 4, fans were not any more amused. The Internet was hating on Walk Off The Earth for their Canadian anthem performance.

In order to make things right for Game 5, the Raptors stated that there would be no singer for the Canadian anthem and instead, the crowd would be taking over.

Just a few moments ago, an opera singer came out onto the court and sang the beginning of the Canadian national anthem. While he started the song, the crowd finished it and Canadians are living for it.

If you missed it, don’t worry. There are tons of videos online. The feeling of an entire crowd of fans finishing the anthem was really something you cannot put into words and the internet is agreeing.

Drake was also seen singing along with the Canadian anthem and though short, it's a video you definitely need to watch.

The large majority of people are obsessing over the anthem and saying it was the best anthem they have heard yet. Many others are proud to be part of such a history-making moment.

One tweet that is getting a lot of love on Twitter states that when the entire crowd sings the anthem, it puts into prescriptive that the Warriors are not just taking on the Raptors, they are taking on the entire nation.

Having the fans sing the anthem made it so the warriors aren’t just playing the raptors, they’re playing the entire country of Canada
— Max Friedman (@Max Friedman)1560214721.0

This power move even had many fans emotional, with some feeling goosebumps and others getting tears in their eyes. Even fellow Americans were blown away by the performance.

Win or lose, many people are proud to be Canadian especially after that patriotic display.

Now get back to watching the game!