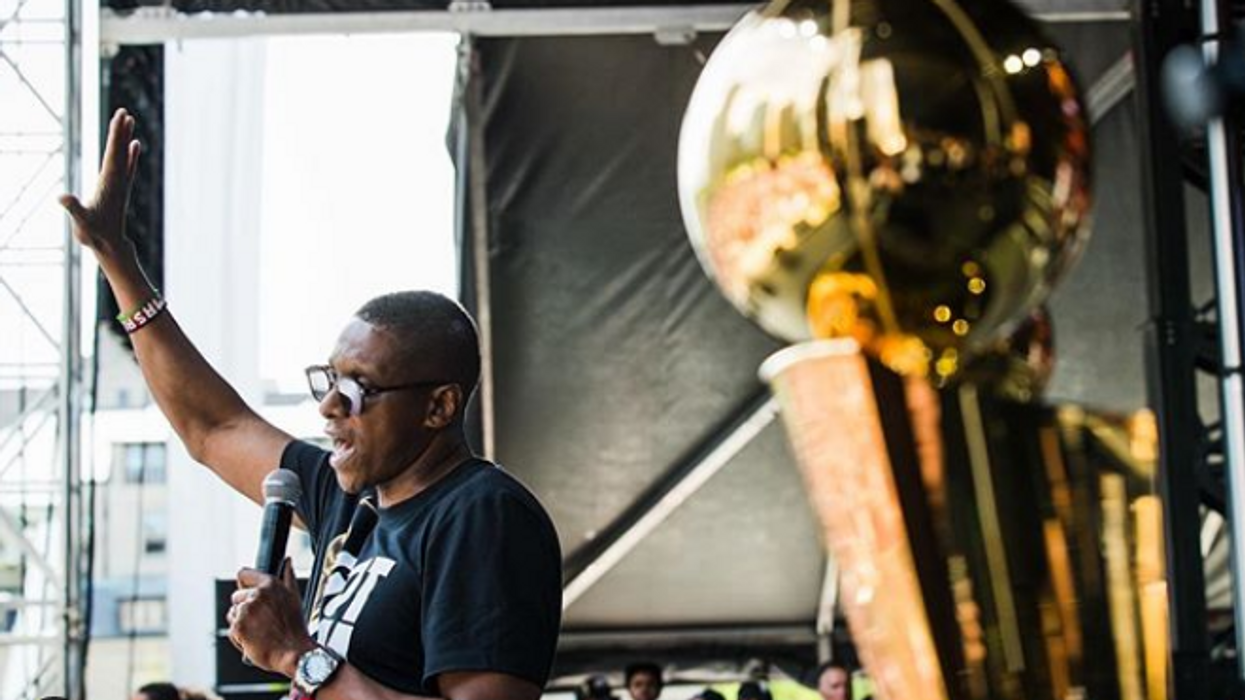 Every great establishment has an architect. For the current NBA champions, it's Masai Ujiri. The Toronto Raptors President of Basketball Operations built and shaped the franchise into what it is today, so it's perhaps not surprising that fans don't believe a report suggesting he will leave.

Ujiri, who has been in his position at the Raptors since 2013, has been linked with the New York Knicks this week.

A report from Newsday's Steve Popper suggests Ujiri is wanted by the Knicks at the end of the current season as the N.Y. franchise looks to turn around its fortunes.

Popper writes there is a "fear" within the Raptors that Ujiri will choose to move on after getting his hands on the ultimate reward for his work, the Larry O'Brien Trophy.

It is speculated that Knicks' executive owner James Dolan's main way of enticing Ujiri could be to offer him the potential to build and grow his charitable foundation, Giants of Africa, in the spotlight of the Big Apple.

This is far from the first time Ujiri has been linked with a move to New York, though.

And disbelieving Raptors fans are not being shy in calling bullshit on the latest rumours.

Masai setting up another opportunity to embarrass the Knicks on the national stage is just one of the many reasons why I love him.
— Matt Shantz (@Matt Shantz)1575323822.0

This comes up every once in a while, but I don't think general NBA fans realize how much money the Raptors ownershi… https://t.co/vtEeraLMAZ
— Anthony Doyle (@Anthony Doyle)1575323695.0

Ah, looks like another day to remind everyone that the thought of Masai Ujiri working for - and/or taking orders fr… https://t.co/jQ3a42r8Xj
— Joseph Casciaro (@Joseph Casciaro)1575324882.0

We've been talking for years about how player's don't want to go to the Knicks because of meddling from Dolan. Peo… https://t.co/LUqX1Ng4rz
— Matt Shantz (@Matt Shantz)1575324856.0

One thing that is apparent throughout the speculation is Ujiri's appeal to other franchises.

He transformed the Raptors into NBA champions through strong foundations and bold moves. None were bolder than trading away DeMar DeRozan and numerous teammates to being Kawhi Leonard to the 6ix.

His successive has continued this year, in the fact the Raps are flying in 2019-20 despite NBA Finals MVP Kawhi's exit.

So, would Ujiri give up all he has going on in Toronto to take up a position at the Knicks? Maybe it depends if his "f*** Brooklyn" chant back in 2014 was reserved for the Nets or indicative of his view of New York as a whole.

In fact, there's video record of Ujiri being somewhat less than enthused about the Knicks franchise.

In the same year as his assessment of Brooklyn, Ujiri said on George Stroumboulopoulos Tonight: "Please clap after this: I hate the Knicks."

Nothing to see here.

On Monday afternoon, meanwhile, amid the rumours, the Raptors shared a photo on social media of Ujiri and coach Nick Nurse dep in discussion during a team practice.

Ujiri is no stranger to making headlines himself, particularly in recent times.

Notoriously, he was accused of having pushed a deputy officer at Oakland's Oracle Arena shortly after the Raptors sealed their NBA title with a Game 6 win over the Golden State Warriors back in June.