The number of transit riders who have been hit getting on or off the streetcar is astounding. 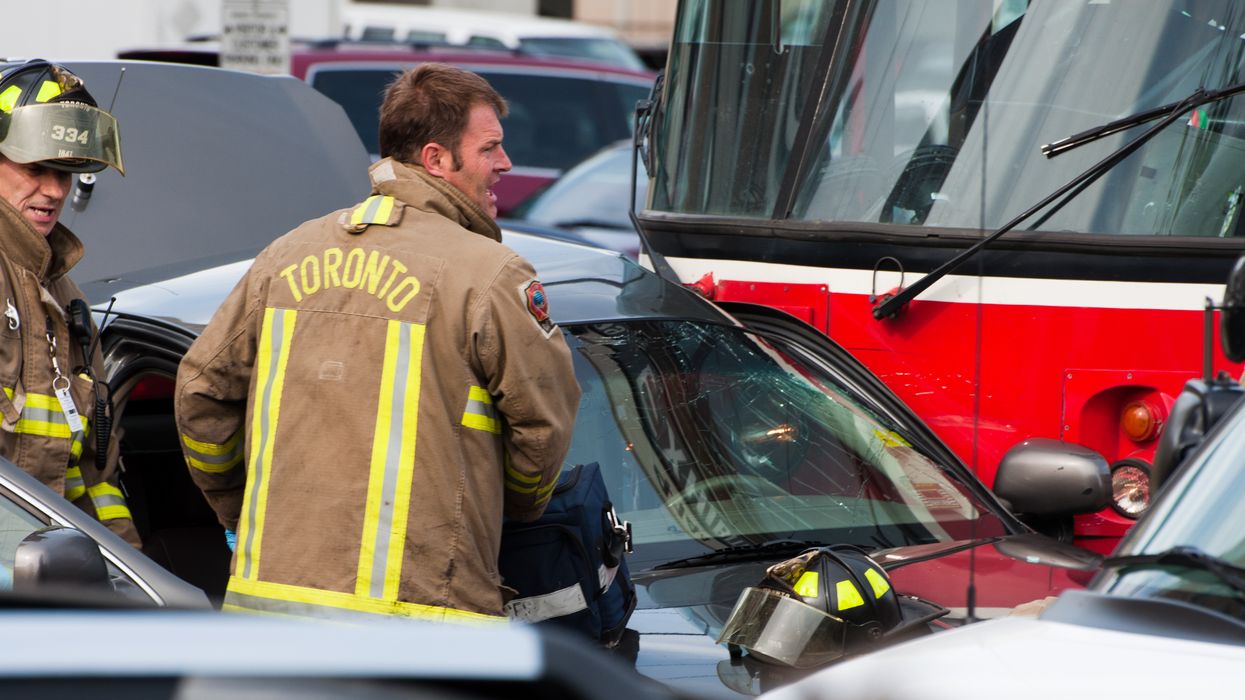 Anyone who frequently takes the streetcar in Toronto can tell you that it's not uncommon for cars to speed past the doors when you’re trying to exit. Whether the driver is distracted or trying to make the green light, passing a streetcar at a stop is not only illegal but also dangerous. After multiple Toronto streetcar accidents this year, people think that greater measures need to be taken.

CP24 reported on October 9 that another pedestrian was hit while attempting to board a streetcar. The woman was struck at the intersection of College and Bay when a car flew past the open doors of a streetcar. Toronto Paramedics told the news outlet that the woman was rushed to a trauma centre with serious injuries. The driver of the vehicle remained at the scene.

The incident sparked a long discussion on Reddit. People are sharing their own horror stories of almost being clipped by cars while stepping off of public transport in Toronto.

“I've been hit getting off the streetcar at that exact spot. Fortunately, only a glancing blow. Enough to spin me around but not to seriously hurt me,” wrote one Redditor in a thread on the issue.

“I’ve had a few near misses there as well,” added another.

A @lyft driver caused a major accident by derailing a full occupied #ttc streetcar at University and King St. Who i… https://t.co/oBqvDr1yob
— Andrew (@Andrew)1560174748.0

While others demanded further action be taken. “Start enforcing literally anything. All my life, I've never once seen someone get a ticket for going past streetcar doors. A lack of enforcement has led to an environment where people feel like they can get away with anything,” one user wrote.

Transit advocates gathered outside of Bathurst Station back in September to ask Ford’s government to allow the use of exterior cameras on streetcars. According to Global News, the advocates argued that the cameras would allow the city to quickly identify and fine drivers who drive past stopped streetcars. Transportation Minister Catherine Mulroney later added that she received a letter about the request, but has yet to review it.

CTV News reported that during a TTC board meeting in September, TTC Chair Jaye Robinson pushed forward an "emergency motion" for exterior cameras to be installed on streetcars.

“This is a big enough problem that I am moving the motion today and it is an emergency motion,” Robinson said. “We can put up all the decals, all the signs, all the flashing lights on streetcars but if we don’t have the ability to amend the Highway Traffic Act we can’t enforce and that just leaves us standing there not being able to act.”

Under Ontario’s Highway Traffic Act, the fine for passing an open streetcar door is only $85, which does rise to $150 within a community safety zone. However, if you stop without leaving at least two metres between your car and the open door, the same fines apply.

“In the last three years (2016–2018), we’ve had at least 31 incidents where someone has been injured by a passing car while boarding or exiting a streetcar: 25 while exiting, six while boarding,” the TTC's Stuart Green told autoTRADER.

“There are many, many more close calls, but we don’t have a record of those as there are multiple occurrences a day on every route.” Narcity has reached out to the City of Toronto and the TTC for more details about how these accidents can be prevented in the future.