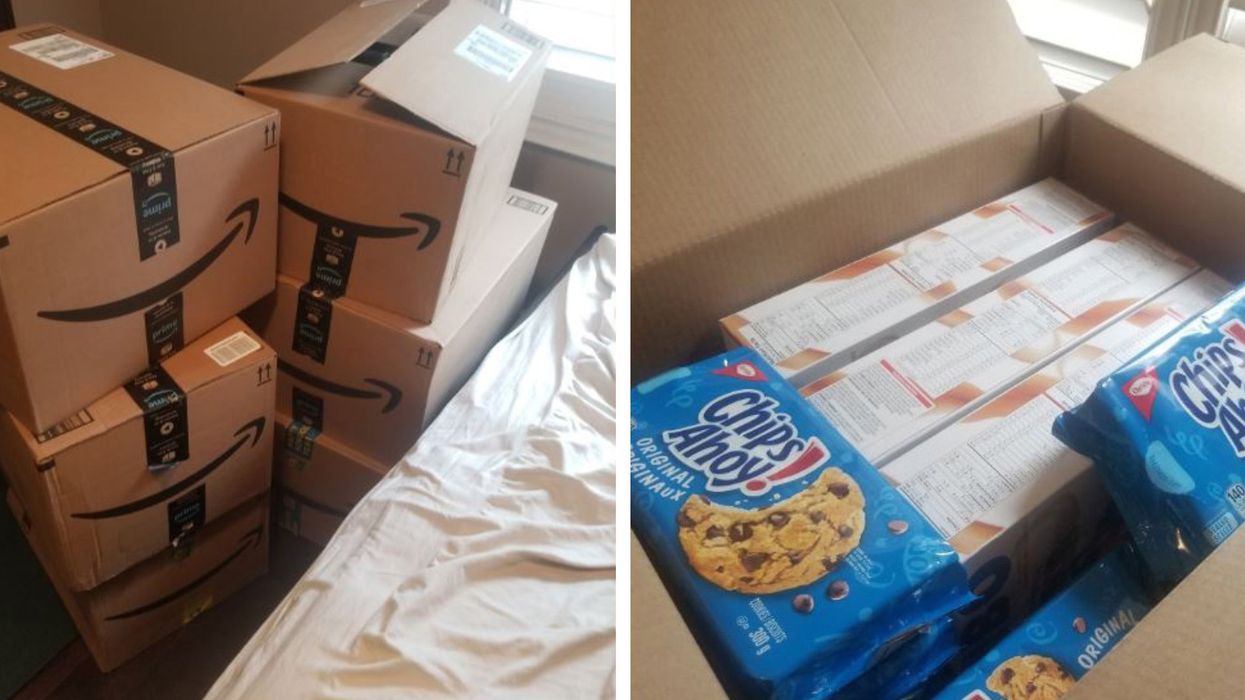 You don't hear stories like this every day and, to be honest, that's a real shame! A Toronto student offering free snacks is getting plenty of requests on social media after his friend played a hilarious, good-natured prank on him. Twitter user Antonio (@AntonamoreTtv) revealed that 100 boxes of goodies showed up on his doorstep on Tuesday, Aug. 27.

The treasure chest of calories contained everything from Oreos to Rice Krispies bars to Cinnamon Toast Crunch.

Antonio told Narcity he was shocked when the packages, fantastically addressed to "Anton Thick Daddy," showed up on his doorstep.

"Well, I opened the door and was like 'what the f*ck is this?' Then the delivery guy was like 'I take it you're Anton Thick Daddy?' so I was like, 'apparently I am!'" he says.

It was clear the snacks were something Antonio wasn't down with, as he quickly offered them to anyone in the GTA.

"I'm not gonna eat any of this shit," he tweeted. Fair enough, Antonio!

The long list of snacks didn't go to waste, as Antonio says he started messaging his friends to try to get rid of them. And quickly, his Twitter DMs blew up with requests.

Cinnamon Toast Crunch was the most popular choice, whatever you make of that.

@ZZastela I legitimately am compiling a list of requests before saturday. Everything I still have left over ill jus… https://t.co/TezYjCRyYT
— Antonio (@Antonio)1566932057.0

"Not sure why. But everyone asked for that one," Antonio says.

And while everything was up for grabs, if people wanted it, they had to put in the work.

Twitter user Chance (@CwEzZy54) asked for "one of everything." When Antonio told him to come to Toronto, Chance rather optimistically asked for him to "pay for my flight."

User Moose (@uzimoose) asked Antonio to ship him a box of the sugary cereal to Arizona, but it ain't happening.

"No, too far," Antonio responded.

Antonio told Narcity he even got a request from Scotland, U.K.

"I'm like 'bro, I'd rather just buy you a box of cookies, and ship it to your address then ship one I had received,'" he says.

The story doesn't end there, as Antonio says any snacks left over will go towards a good cause.

"Physically shipping out boxes would have been a lot of money and time. I'd rather give it to people in need like a food bank," he says.

As far as how much his friend spent on the prank, it's outta sight, outta mind for Antonio.

"I don't even want to know, to be honest," he says. When asked if he wanted more snacks, his reply was "God no."

However, based on the goodies shown in the boxes, Narcity's calculations estimate Antonio's friend must have stumped up at least $320 for the prank, which is pretty strong commitment as far as we're concerned.

On Tuesday, convicted killer Paul Bernardo was denied parole for the second time after he claimed he committed the crimes out of entitlement.