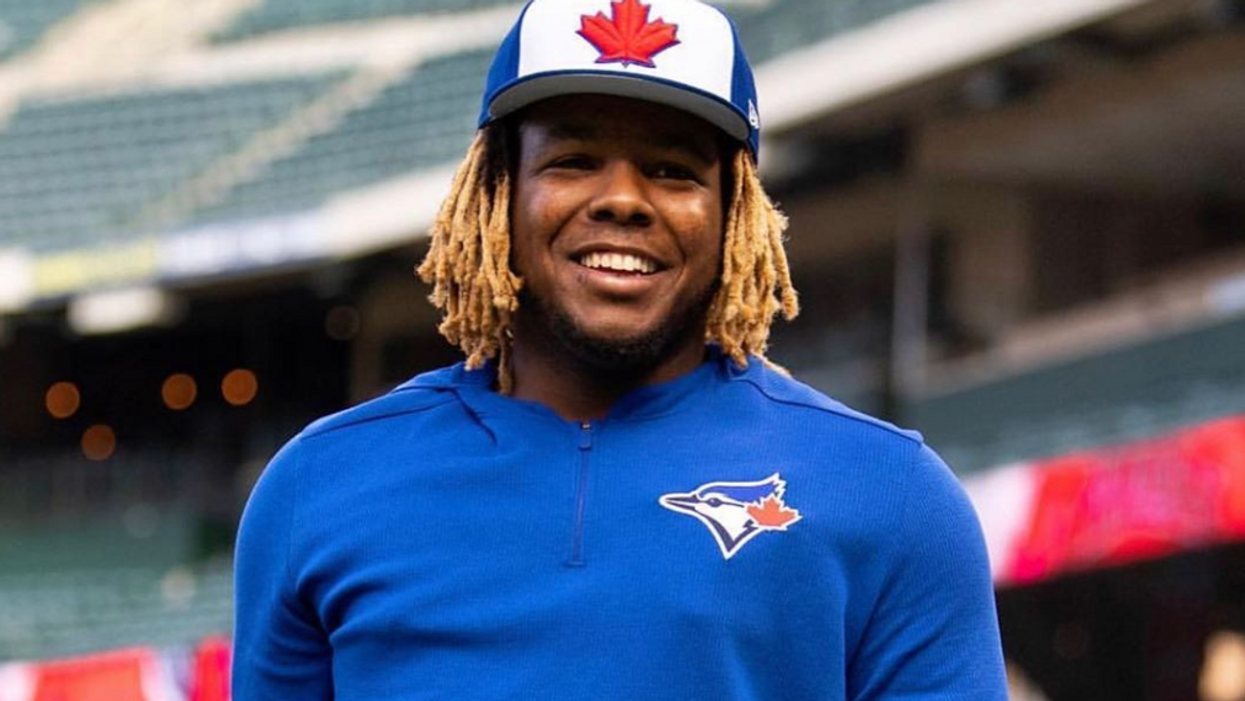 Toronto Blue Jays rookie Vladimir Guerrero Jr., the son of a Hall of Fame legend and Toronto's über-prospect, made history last night when he hit his first two homers of his career.  The third baseman's long-awaited debut for the Toronto Blue Jays on April 26th was considered by some to be a "coronation" of the young player as he finally achieved Major League status. Vladimir Guerrero Jr, or "Vladdy", is regarded as the team's secret weapon that will catapult the Jays to World Series victory this year.

Guerrero Jr. carries the legacy of his father, Vladimir Guerrero Sr., who spent 16 seasons in Major League Baseball as a right fielder and designated hitter. With a strong connection to baseball through his father's past, his potential for a prosperous career has been the subject of fans and critics since he was signed for $3.9-million with the Blue Jays as a 16-year-old in 2015.

Arguably just a boy among men, Vladdy hasn't disappointed fans. Last night, Guerrero Jr. became the first Blue Jays player, in 5 years of Statcast tracking, to hit two homers of at least 110 mph in the same game.  Not a bad start to his career in the big league, if you ask me!

Guerrero Jr. proves that he is worthy of the immense praise that has been bestowed upon him so early in his Major League tenure, demonstrating to the world that, yeah, you probably shouldn't so soon forget his name.

Here's what you need to know about baseball phenom Vladimir Guerrero Jr.:

1. Born on May 16, 1999, Guerrero Jr. became the third-youngest player in Major League history to hit his first two career home runs in the same game.

2.  Guerrero Jr. was born in Montreal, Quebec while his father was embarking on his fourth of eight seasons with the Expos. He holds a Canadian citizenship!

3. Vladdy has an impressive baseball pedigree. Not only is his father recent MLB Hall of Fame inductee Vladimir Guerrero Sr., but his cousin, Gabriel Guerrero, plays for the Miami Marlins. His uncle, Wilton Guerrero, played for the Los Angeles Dodgers, Montreal Expos, and Cincinnati Reds. Clearly, talent runs in the Guerrero family!

4.  Vladdy was ranked as the 2015 top international free agent by "Baseball America", and fourth overall by MLB.

5.  He is considered to be the top prospect in all of professional baseball by both MLB and Baseball America.

6.  Vladdy was just 14 years old when former Blue Jays general manager Alex Anthopoulos first noticed him.  Anthropoulos was scouting players in the Dominican for the 2014 draft when he laid eyes on young Vlad Jr.

Anthropolous recalls, “We didn’t know the names, they were just these kids hitting and Vlad comes up and he’s just hitting balls, loose, quick, easy swing, balls jumping off his bat."