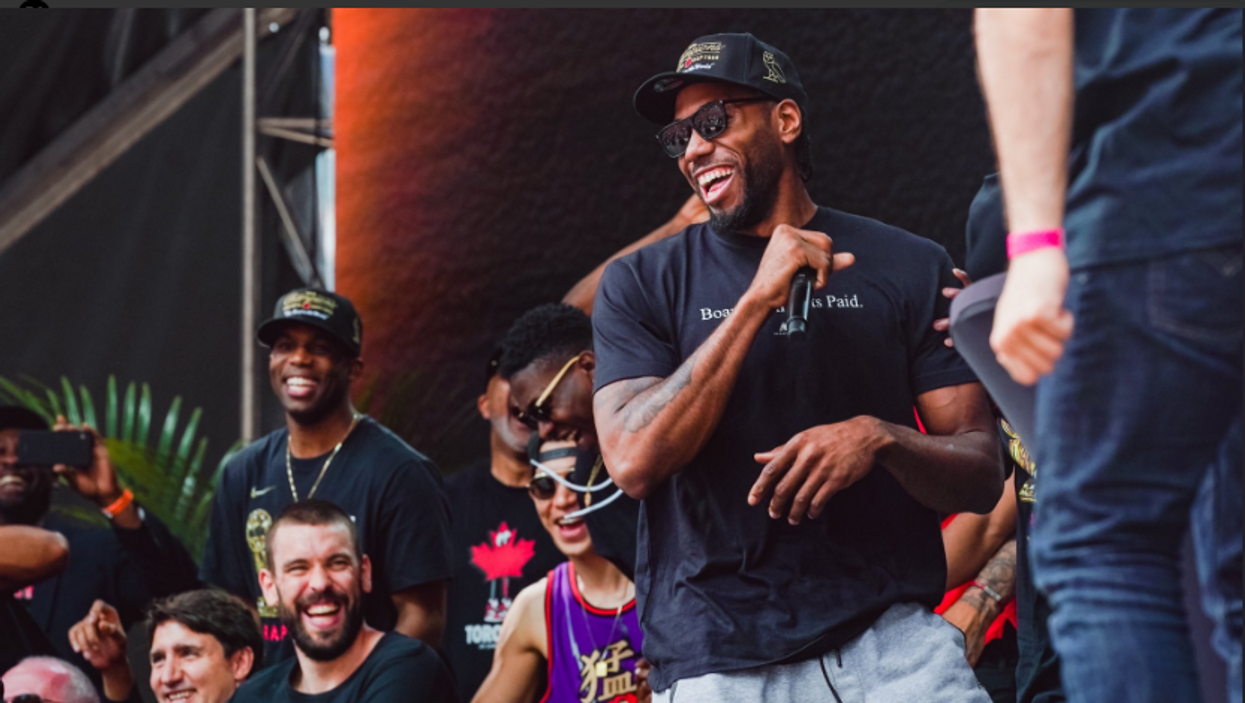 It felt like the entire city of Toronto was at a standstill on Monday. Millions came out to celebrate the Raptors at the victory parade, a spectacle that hasn’t been seen in the 6ix since the Blue Jays won it all back in 1993, and maybe not even then. At front and centre was Kawhi Leonard, who seemed happier than Toronto's ever seen him before. Which brings us to the question - will Kawhi stay? After yesterday's festivities, many fans are convinced that they already know the answer.

During the parade, clips of a cheerful-looking Kawhi started popping up all over social media. The Raptors star, who showed little emotion all season, could hardly stop smiling. Kawhi was clearly having a blast yesterday - so much so, that fans are now totally convinced that he’ll stick around for at least one more year.

Kawhi was celebrated by fans chanting "MVP" all along the parade route:

Kyle Lowry got everyone chanting "five more years" for Kawhi. Even Kawhi’s Uncle Dennis, who is also his agent, joined in. Which, to most people, seems like proof that the player has already decided to stay.

Fans are so convinced that Kawhi will stay that they even created a hilarious new website dedicated to the cause:

Also, Kawhi finally accepted that housewarming plant from "Plant Guy". Which, according to fans, is basically just as good as the contract itself at this point.

Kawhi also gave Toronto some pretty big props during an impromptu interview. Kawhi claimed that he knew that the Raptors had what it took to be champions, since day one of training camp:

Perhaps the best moment of the day was when Mayor John Tory presented Kawhi and the Raptors with the key to the city:

But I think most fans would argue that it was when Kawhi ended his speech with his famously awkward laugh and everyone went wild. Fun guy, indeed!

Everything remains up in the air for Kawhi, who is now just two weeks away from becoming a free agent, when he will have to make his final decision about his plans for next season. It's safe to say that the city has done everything possible to convince him to stick around at this point, but only time will tell if all that love was enough.