He's expected to return for the first time since his injury. 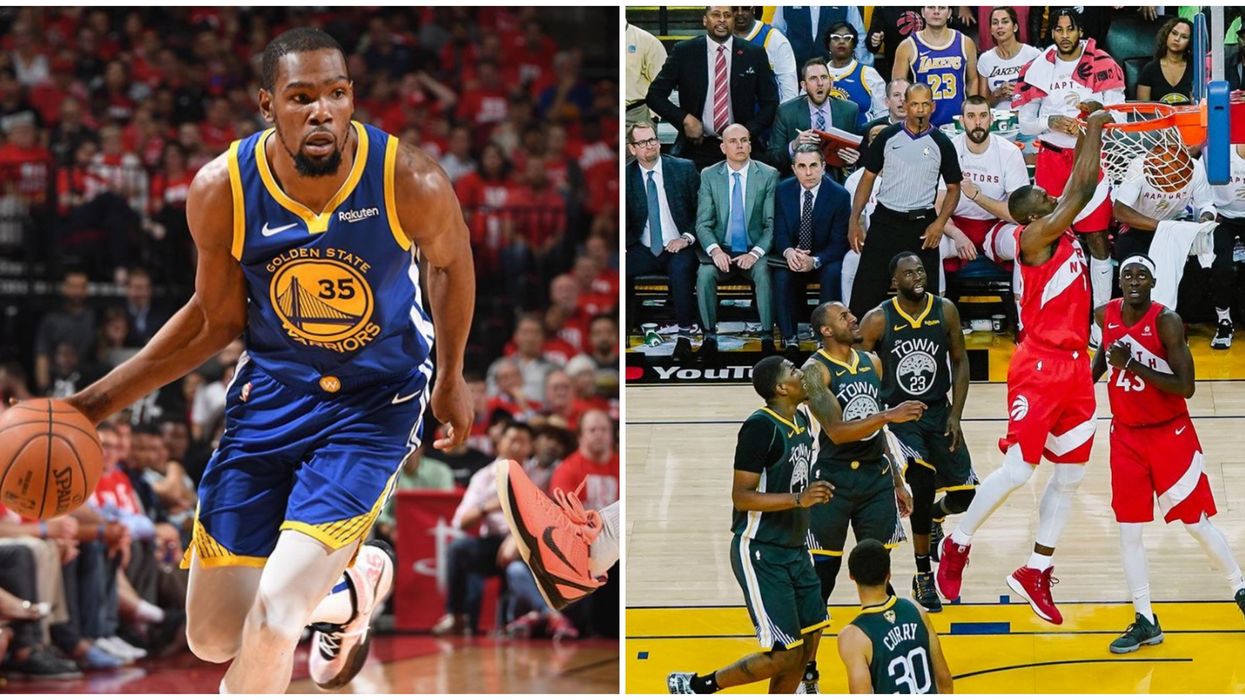 The Raptors will take on the Warriors tonight during Game 5 and fans could not be more excited. The Toronto franchise has just one more win to go before they take home the championship. However, a major game changer could be coming tonight. Will Kevin Durant play in the NBA Finals Game 5? The Warriors star is expected to make a return to the courts after sitting out all the previous games due to his injury, according to new reports.

According to ESPN, Kevin Durant is expected to play tonight in Game 5. Right now, the Warriors have stated that it will be a "game-time decision" whether the star returns to the court.

Durant did end up playing in practice on Sunday after being cleared by medical staff. “He went through full shootaround and went back to get treatment,” Warriors coach Steve Kerr said, according to SportsNet. “We’ll list him game-time decision, but it looked good and we’ll see where it all goes.”

The Warriors star has been sitting out the playoffs due to his strained calf injury, but his return could be a major gamechanger and the Warriors coach has confidently said that if he's back, it'll definitely be a threat.

“The skill, obviously, is undeniable and he’s a guy who can get a shot off anytime he wants", said Kerr, SportsNet reports. "He’s been in similar situations with us where he’s had long layoffs. He’s Kevin Durant. If we have him out there, he’ll be a threat. We know that.”

Some people have been saying that Kevin Durant's injury has been a big factor in the Warriors' losses against the Raptors. With his return, some believe that this will lead to a win for the Warriors and that it could change the stakes – right as the Raptors are on the brink of a historic championship win.

@wojespn @SportsCenter Drake about to drop the most saddest album ever if the Raptors pull a Warriors in this series
— Moreno (@Moreno)1560192823.0

However, many Raptors fans are staying confident and still believe that the team can claim the championship title tonight.

When Kevin Durant sat out during previous NBA Finals games, many Raptors fans were overjoyed. Even though Durant is expected to be back tonight, it's not all bad news. Besides Raptors fans convinced that the championship title is secured, analysts have also predicted that the Raptors have a higher chance of winning the NBA finals than the Warriors.

The Raptors have just one more win standing in between them and the championship title. So make sure to tune in to the NBA finals at 9 PM ET, because tonight could be the night that the Raptors make history.