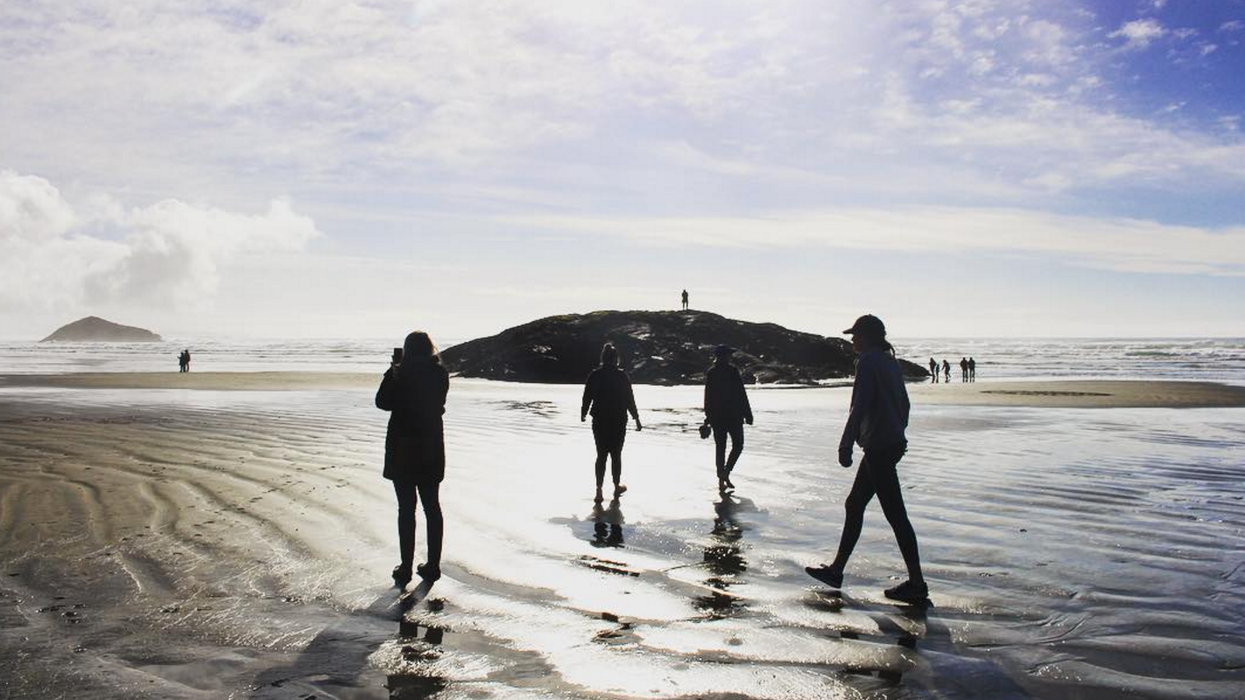 Mid-winter, snow is falling, you're feet may be permanently cold, and you're starting to wonder what it's like to only need one layer. So what happens? You start planning all the things you're going to do when you no longer need to look like the Michelin Man just to go outside. Where to go!? What to do!? Spain? Thailand? Cambodia? Japan?! Then it dawns on you, you picture yourself in the opening scenes of Grease, the sun beating down on you while you prance in the expansive sandy beaches. To completely romanticise the scene, you see a Kangaroo nearby and yell G'day mate to no one in particular but f*ck it- IT JUST FEELS RIGHT. You're going to Australia!

Then you remember one little thing, it's pretty fvcking costly to get to the land down under. Despite all the discounts and ticket price watching, it seems that all those nights on King West really added up and you're suddenly at a loss. Your dream vacay just disappeared, what to do?

NO FEAR! Canada is an expansive country, one that mother nature has spoiled with stunning landscapes, parks and areas - but you know that. Something you may never have realised? Is you can have an outback style adventure without even needing to whip out your passport. These shockingly similar sights will satisfy your inner wanderlust while keeping your wallet the size you need it to be.

Like the magical sight of the Twelve Apostles in Victoria (Australia, not B.C.), this Canadian marvel has been drawing in people for years for its natural wonder. As you hike along the Balancing Rock trail you'll get an awesome view of St. Mary's bay behind the famous Balancing Rock. Imagine this as one of your stops on your Great Ocean Road trip through Australia and you're set for a great adventure!

This iconic lighthouse has been guiding people home since 1836, and thankfully it's still there for us to take in its beauty. It also happens to be on the most eastern point of North America, and its shockingly similar counterpart in Australia, the Cape Bryon lighthouse also happens to be on the most eastern point of mainland Australia. More than just a beautiful landmark, it was also the location of a defence battery in World War II because of its location on the coast. Hike around here for a beautiful day taking in stunning views of the Atlantic Ocean. Both locations are prime spots for sunset lovers, and when you're caught up in that kind of majestic scenery? You could imagine yourself as being in the Australia easily.

Looks like: The Devils Marbles (Karlu Karlu) located in the traditional country of the Warumungu, Kaytetye Alyawarra and Warlpiri people.

This colossal two-stories high rock's most interesting feature? The fact that you won't find another one like it for another 600 miles. Looking around when you get to this historical marvel you won't see anything but flat land for miles, so how the f*ck did the rocks get there? Well, back in the day (and we're talking 10,000 years back in the day not just to that time you always wore Abercrombie), it was carried along by melting ice glaciers that were in the present day Athabasca river. Originally it was part of the mountain that's in Jasper National Park. It's the largest of the glacial erratic's that were carried by the glacier, weighing in at 16,500 tonnes, if that doesn't blow you away we don't know what will.

Aussie connection? Both landmarks share a history that sounds almost too cool to be true, the Devil's Marbles have a great significance to the Aboriginal people of Australia and a fascinating story as to how they ended up in their gravity defying state (read the full story here). The Big Rock also has an equally interesting story about the split down the middle (check it out here), head there to truly appreciate these legends.

It's not known as Canada's surf capital for nothing. With 35km of surf-able beach break, the annual Queen of the Peak all Women's surfing competition in October, and tons of surf school to get you started - turns out you didn't need to travel as far as you thought for some world class waves. And even better? Like Queensland, Tofino also offers a great balance of surfing and all the luxe of city life, from great dining (check out the Clayoquot Oyster Festival and Wolf In The Fog) and local artisans.

Pro tip: Learn to surf and stand up paddleboard from the holder of the Canadian Women's National Surf title Catherine Bruhwiler at Tofino Paddle Surf. Open to all levels.

Looks like: The Blue Mountains, which also happens to hold the infamous attraction The Three Sisters, and bushwalks.

Seeking the kind of adventure and scenic beauty you would get in the World Heritage Area The Blue Mountains sits in? Head to a similarly stunning mountain range, the Long Range Mountains, at Gros Morne National Park. Think it's just another park? THINK AGAIN, FRIENDS. Here you can explore some ancient sea floor and preserved ocean avalanches (!!) that were exposed to land when tectonic plates collided about 500,000,000 years ago - ya, that's pretty f*cking remarkable. In the summer you can go hiking, kayaking, head on a boat tour or pitch a tent in one of the five campgrounds in the region to enjoy this massive park. In the winter, make sure to check out Marble Mountain (about one hour and 1/2 away) for some great skiing. In the communities in Gros Morne you can also browse the restaurants and shops to get the full experience of this Canadian gem. Find some great spots here.

Feels like: You went to the surfing town of Bryon Bay.

Wait...surfing...in Ontario? Yes, it is a thing. Not only is it a thing but in recent years this Ontario gem has been rising in popularity for being one of Canada's best surf spots. Don't have the time/money to get out to Bryon Bay? This Ontario town offers that similar charm of a small town; amazing restaurants, art galleries, stunning sunsets and so much more, find all your options here. They are becoming more and more famous for their epic surfing as well, head to Kincardine's Station Beach for that hang ten you've been craving without compromising on quality.

I'd like to stop and take a minute to thank Mother Nature for making the world SO BEAUTIFUL! Come on! Just 42km north of the equally famous Lake Louise you'll find what's known as one of the most beautiful lakes in the world for its magical blue/green water. You can also do the Peyto Lake hike, with various options for your route depending on your skill level. Here's info on the routes!

Instead of taking a tour in south-west Western Australia, why not take a similar tour through the boutique wineries of Prince Edward County? It's been a favourite not only of Ontario residents but those from around the world for years. Just north of Lake Ontario, these wineries use a special method called hilling up and de-hilling to protect the vines over the harsh Canadian winter (something no other wine region in Canada does), and their hard work truly pays off. The specialities of the region are Pinot Noir and Chardonnay, so automatically you're going to feel like an international superstar with that kind of class. Experimental wineries are trying out new things with different kinds of wine as well. Check out some of our favourite spots to hit for an unreal trip; Grange of Prince Edward Estate Winery, Karlo Estates, and Hinterland Wine Company! Here is a full list of all the Wineries for you to choose from.

Feels like: your taking a cruise along the amazing roads of Victoria's Great Ocean Road!

298km of gorgeous roads has been given to us through the Cabot Trail in Cape Breton and for anyone who loves the idea of road trip playlists and stunning sights, this is the road trip you've been waiting to go on. Funny that it's also part of some of Victoria County, this epic trail loops around the majestic Cape Breton Highlands National Park. In Australia, you can you go camping under the stars, catch some Whale sightings, and even hang ten. On the Cabot Trail? You'll pass by Pleasant Bay, which is only, oh I don't know, the whale watching CAPITAL of Cape Breton, WHAT'S UP!? As well you'll go through Ingonish which is on the eastern entrance to Cape Breton Highlands National Park and has Cape Smokey Provincial Park (even more nature) and the Broad Cove Campground (camping, duh) in its borders! You'll never feel like you're missing out on this beautiful trail!