A mandatory evacuation has been ordered by Toronto Fire and Toronto Police. 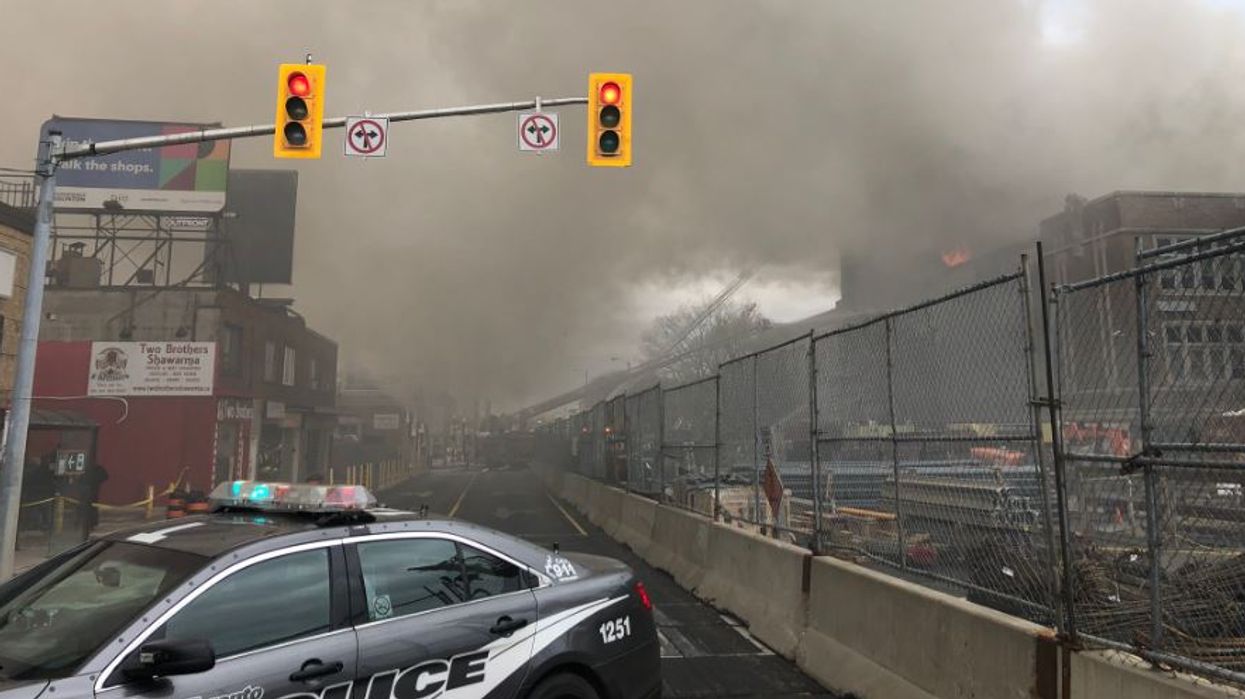 A mandatory evacuation has been ordered by Toronto Fire and Toronto Police after a second fire broke out at York Memorial Collegiate Institute.  Emergency services were called overnight when reports of heavy, migrating smoke broke out in Toronto's west-end. The York Memorial fire has since been upgraded to a six-alarm response.

Numerous homes in the Eglinton West area between Trethewey Drive and Bicknell Avenue have been forced to evacuate as crews continue to battle the raging six-alarm blaze that has torn through the school and caused the roof to collapse.  Police are reportedly going door-to-door to inform homeowners of the evacuation.

Emergency crews were initially called to the scene yesterday at approximately 2:00 PM due to reports of a three-alarm fire.  Toronto Fire contained the blaze by 4:00 PM, but a thermal imaging camera recorded a flare-up at some point during the night.

"Once that was detected around 3:24 AM this morning, a second alarm was immediately called," Toronto Fire Capt. David Eckerman explained to CP24.  According to Toronto Fire Chief Matthew Pegg, the blaze was referred to as "significant" and "complicated" and is seemingly unrelated to the fire that started yesterday.

The initial phase of evacuation will involve those buildings fronting on the south side of Eglinton between Trethew… https://t.co/X1bxlLV3Yn
— Matthew Pegg (@Matthew Pegg)1557234288.0

The fire on Eglinton has been upgraded to a 6th alarm. Additional resources being brought to assist with evacuating… https://t.co/OvpnG597Fl
— Matthew Pegg (@Matthew Pegg)1557237862.0

"The early indications are that this is a separate fire from yesterday’s fire," Pegg told reporters.

The fire was escalated to a five-alarm situation early this morning, when heavy smoke and flames were seen escaping from the building.

Eckerman told CP24 "Crews continue to fight a stubborn hidden fire in the stage and auditorium area.  The fire has spread in the walls from the first and second floor adjacent to the stage area as well as burning in under the stage as well. It has since continued up into the roof area."

#UPDATE on the York Memorial Collegiate - the black smoke and flames are back in full force. Not a good sign #fire… https://t.co/Pc1JvrC3UP
— Jamie Mauracher (@Jamie Mauracher)1557237533.0

He believes that fire crews will need to continue putting out the fire "for hours."

Although no serious injuries have been reported, one person was treated at the scene for smoke inhalation yesterday.

Emergency services have not yet determined the cause of the fire.

Toronto Police Superintendent Ron Taverner told CP24, "We’re working very closely with Toronto Fire. Obviously, we won’t be able to determine what’s gone on here until the fire is put out. The Ontario Fire Marshall is involved as well, so it’s an ongoing process."

Police believe there may be evidence to suggest the fire is "suspicious", but note that they do not possess enough information to make any conclusions quite yet. "We’re concerned that it may be suspicious.  It’s too early to really focus in on causes, etc. right now."