“Gun violence in Canada is rising, and we’re doing something about it." 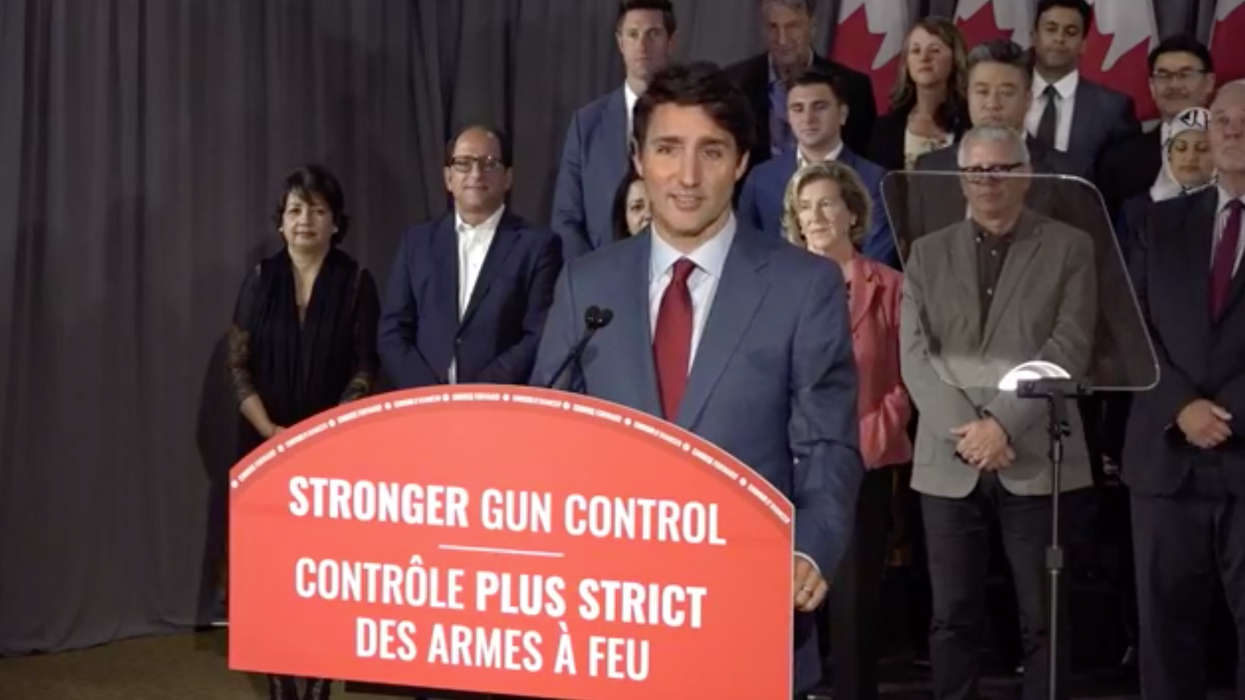 During a visit to Toronto on Friday morning, Prime Minister Justin Trudeau announced that if he is re-elected next month, he will place a ban on all assault rifles in Canada. While visiting Toronto's Danforth, the site of a 2018 mass shooting, Trudeau explained that nobody in Canada should require an assault weapon, adding, “You don’t need a military-grade assault weapon — one designed to take down the most amount of people in the shortest time — to take down a deer.”

In an additional tweet a short while later, Trudeau added, “Gun violence in Canada is rising, and we’re doing something about it. We’re taking concrete steps to strengthen gun control by banning military-style assault rifles that have no place in Canada.”

The second tweet included an image that said, "On gun violence thoughts and prayers are not good enough."

According to the press release that accompanied Trudeau’s announcement on Friday, the ban would include the controversial AR-15 rifle, which has been used in several infamous mass shootings, including in Parkland and Sandy Hook in the United States. The press statement confirmed that the ban would include, “all military-style assault rifles, including the AR-15.”

While the liberals have confirmed a ban on assault-style weapons in Canada, Trudeau is yet to take concrete steps to ban handguns. When asked why he wants to ban one but not the other, the Prime Minister said that he intended to pass these powers to municipalities, so they could each decide whether to restrict or ban handguns within their own boundaries.

The ban will also include a reimbursement mechanism, meaning that all legal owners of assault rifles will be able to turn in their guns, in exchange for a fair market price for their weapons.

Speaking in Toronto on Friday, Trudeau said, "People are dying. Families are grieving. Communities are suffering." He went on, "So we're going to do more and we're going to do better. Thoughts and prayers are just not going to cut it. The choice could not be clearer: Liberals are for tougher gun laws, Conservatives are for weaker gun laws."

Naturally, the reaction from Canadians has been mixed. Some responded to Trudeau’s tweets to applaud him and the Liberals for taking this step, however others replied to call out the Prime Minister out for targeting legal gun owners.

One Canadian responded to Justin Trudeau’s tweet to say, “This is great news. Thank you for protecting the children.”

Another Twitter user felt differently, tweeting, “How about banning the criminals who get those guns illegally of which lots are smuggled in across the border. Fix the disease Trudeau not the symptom.”

@JustinTrudeau This is great news. Thank you for protecting the children
— jack mcgraw (@jack mcgraw)1568996125.0

@JustinTrudeau Thank you for confirming that gun violence is growing in Canada. This is one of my top three issues… https://t.co/938ytk6Tr3
— Sonya Paterson (@Sonya Paterson)1568998488.0

@JustinTrudeau Licensed firearms owners are the safest, least violent and most highly vetted segment of Canadian so… https://t.co/FlQIg6Kqc8
— Roy (@Roy)1568998136.0

Following all of the blackface controversy that has surrounded the Prime Minister for the past couple of days, it is probably a relief for Trudeau that people are talking about something else, whether they agree with him or not!

Canadians will go to the polls on October 21.