TFD to the rescue. 🚒 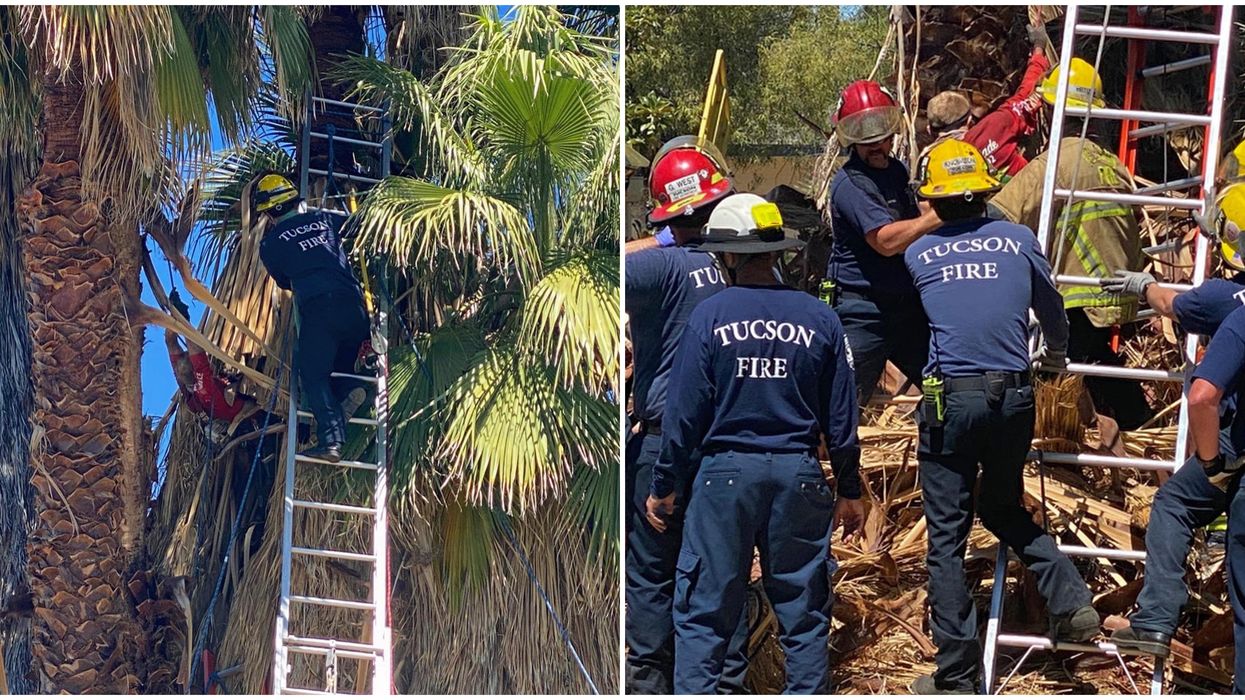 One community in Arizona was gripped with an unexpected tree trimming issue on Wednesday afternoon. The Tucson Fire Department responded to a call after a man found himself stuck in a massive palm tree he was trimming. Thankfully, he was set free and transferred to a hospital after.

"Tree trimming is not easy, and certainly hazardous! We’re glad we could be there to help," the Tucson Fire Department wrote on its Twitter post.

On Wednesday, April 15, 2020, the Tucson Fire Department responded to a call about a man stuck in a palm tree at a house on Camino Miramonte in Tucson.

Officials for the fire department wrote that "Crews worked quickly to free the man."

During the rescue process, photos were taken to document the ordeal. In the pictures, he appears to be dangling underneath the huge overgrowth of a palm tree.

The department issued a warning on its social media for any nearby people to avoid the area, "#TucsonFire is conducting a technical rescue on Camino Miramonte - a tree trimmer is stuck in a large palm tree. Avoid the area."

After the crew's quick work, the man was transported to a hospital for further treatment.

Their hard work didn't go unappreciated as its Twitter post congratulated the crew for their hard work, "Great work A Shift! 👷‍♀️🚒🚑#TFD"

A firefighter from @TucsonFireDept Ladder 7 clears away debris around a palm tree trimmer trapped in a tree near El… https://t.co/g8djDoWoZC
— Rick Wiley (@Rick Wiley)1586981857.0

The department warns that trimming trees is no easy task and can be dangerous. Thanks to their quick work, the man was rescued and is "back on solid ground."

In the end, the palm tree trimmer made it out of this ordeal in one piece. It just goes to show that any job can be risky.

As Arizona continues to see a rise in COVID-19 cases, the state is taking action to prevent the spread. Tucson's face mask mandate will require everyone over the age of two to wear a face-covering in public. If you refuse, you could be in for a civil penalty.

On June 18, Tucson Mayor Regina Romero mandated that everyone within the city is required to wear a face-covering.

"This is excessive, and sends the wrong message to our community."
tucsonromero | Instagram, Todd Taulman | Dreamstime

People all over the country are protesting in unison over the death of George Floyd. In response to demonstrations throughout the state, Tucson Mayor Regina Romero shared insight on how the city will respond. In a tweet shared on June 2, Romero made it clear that military force is not needed at this time.

The mayor of Tucson posted the following to her Twitter page on Tuesday, writing, "At this time, I am not requesting the national guard or any military presence in the @cityoftucson."

If "Riverdale" feels like somewhere you want to call home (minus the wild drama all of the time, of course), then we've got a spot that will whisk you away to your favorite teen town. Little Anthony's Diner in Arizona is the quintessential '50s diner, complete with red vinyl booths and tasty milkshakes. You might expect Archie and Betty to walk through the doors at any minute.

A visit to this uber retro and totally '50s fashioned shake shack will have you feeling all the vibes.