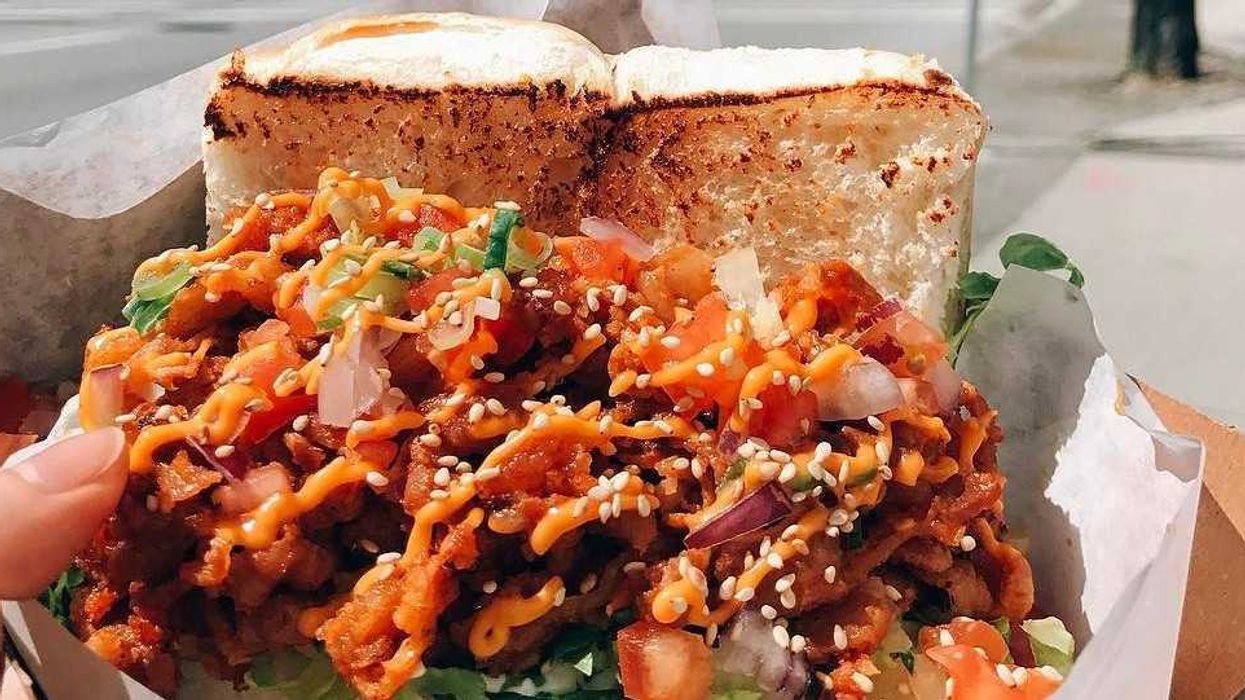 YVR Food Fest is just around the corner, but in all honestly, we can't wait that long. It's May, the sun's out to play, and our bellies are already growling for that food truck goodness.

READ ALSO: This Map Will Take You To The Best Food For Under $6 In Vancouver

There's nothing better than kickin' it with the squad out in the sun in the summer time and hitting up food trucks for that good good grub. There's also nothing better than getting cheap eats that you don't have to tip for in the middle of a busy work day at your office in downtown.

Food trucks can sometimes be pretty elusive, but we've rounded up some of the best food trucks out here in Vancouver and provided links to their social media that they update the most so that you can keep tabs on where they're at in the city at all times.

So without furtherado, here are 12 freaking amazing food trucks you NEED to try this summer!

Korean tacos, burritos, and quesadillas...yummmmm AF. Combining the dynamic flavours of K-town with Mexican flare, Disco Cheetah is making it worth your while to wait in the Vancouver rain for this mn mn good. Go all out with their Bulgogi beef or if you're a vegetarian, try their delicious Soy Tofu or East Fries. You can usually catch them on Robson and Howe or Main Street Station.

Tacos and sandwiches and dirty, dirty fries galore! Feastro is literally a feast on wheels. They even make a watermelon lemonade that is the drink for a hot summer's day (and even if it's not hot, it's still bomb). They don't have a Twitter page, but follow their account on Street Food Vancouver and get the latest updates on their truck stops!

If you haven't had a shawarma wrap from Mr. Shawarma yet, you have no reason not to because this food truck never moves! Pretty much forever located at Robson Square, Mr. Shawarma is feeding hungry downtown dwellers on the daily.

If you ain't got time for that sit down dinner at Torafuku, you should definitely hit up Le Tigre food truck because they are dishing up the yummiest Pan-Asian street food you've ever had. A must try is the Fricken' Chicken...maybe get a side of "crack" salad too.

If anyone's going to make a delicious meat pie with potato mash and mushy peas, it's going to be an Aussie guy. The Aussie Pie Guy's pies are so delicious that people can even pre-order frozen ones and make them right in the comfort of their own home. You have you try the Trifecta.

West Coast cuisine made for the West Coast crowd, Kaboom Box is taking delicious locally sourced ingredients to the next level. Their menu changes from time to time, but their standards are holy grail. Always messy and always delicious...and their Oyster Po' Boy is to die for. Usually spotted at West Georgia and Granville.

Okay, so I know a bike is not exactly a truck, but what's cuter than a French gentleman serving cream puffs he makes himself on a bike? Nothing! Cham Sbouai, the master of the cream puff, makes fresh and unique puffs with flavours like caramelized banana and yuzu custard. He's quite the elusive man however, so you HAVE to keep a close eye on his Instagram...or maybe even just call his cream puff hotline.

Street food doesn't have to be meaty or greasy, in fact it can be the exact opposite. Chickpea is out here reppin' the vegetarians and vegans who need a food truck option too! Rotem Tal and Itamar Shani know just how to connect with your stomachs.

Sometimes on an overcasty day in Vancouver, you just need a big fat take-out box of pad thai to hit the spot. Super Thai Food is the Thai food superhero to the rescue. Locals swear by their pad thai and cashew nut chicken...just sayin'.

Just when you're craving a good old fish taco from Tacofino and feel like it's too far, it really isn't! Don't forget that Tacofino has two food trucks too! Their Blue Burrito Truck is usually dishing out yummy tacos in front of the Van Art Gallery, and their new truck, White Lightning, is parked at Burrard and Dunsmuir.

You already know these guys from The Food Network, MacLean's, and The New York Times, just to name a few. Dishing out award winning Pan-Asian street food, you can trust that you're only getting the best with Roaming Dragon. Though their menu does change from time to time, again like I said, just trust them. They're almost everywhere in the city, so you better keep up with them on Twitter!