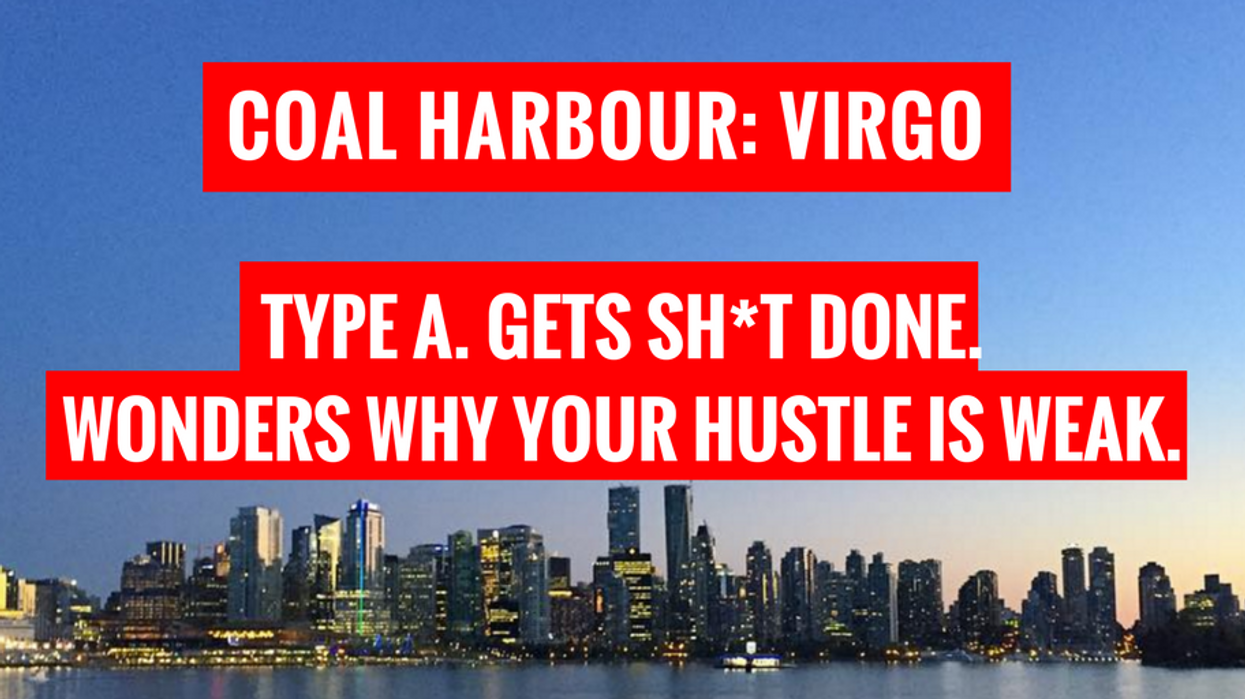 Star signs. Whether you read Georgia Nicols' predictions in The Province every week or you don't subscribe to it at all *cough Aries* we all seem to know what our zodiac sign is.

There are times where we can completely blame our actions on where we fall on the astrological wheel, right? "Sorry for bitching at you earlier, Becky, it's just that I'm a total Gemini and you know the whole split personality thing!!!!!!"

Vancouver's neighbourhoods are diverse enough to be categorized as their own zodiac signs. This isn't to say that all Leos live in Yaletown but, come on, Yaletown is a total Leo. Through and through.

And don't even get me started on the "13th Zodiac" it's not a thing! I don't care if NASA says so!

Aries are all about owning who they are. Individuality is really important to them, and you know the chick with the green hair or the dude with the septum piercing you meet at a record store on Main Street is all about individuality.

Social little butterflies. Geminis will sooner be spotted at 49th Parallel sipping on a latte and catching up with a gal pal than doing anything else in Vancouver.

Cancers are all about feeling and no one "feels things" deeper than a West Van chick. Whether it's contemplating white wine spritzers over vodka sodas or dropping way too much $$$ on a cashmere sweater you can be sure that the first thing that comes out of a West Vancouverite is, "I just feel like...."

Leos are confident. They are strong willed and let's face it, they're vain. Much like Yaletown, Leos think they're a lot more important than anyone who's not dressed in a suit with more gel in their hair than Ross Gellar. (Wait, are Friends references still relatable?)

You're a Virgo. You're Type A. You get sh*t done. You wonder why other people aren't hustling as much as you but you can't be bothered to ask. Because you're hustling. You're a Virgo.

Libras are balanced. Burnaby, I feel, is the balance between civilization and the road to the boonies. Libras are ruled by Venus, the goddess of beauty, and the beauty that befalls in Burnaby demonstrates the quintessential beauty that Vancouver has to offer: nature!

Scorpios are all about acting upon their desires and anywhere that serves cocktails like The Diamond is doing just that. Gastown is arguably the sexiest part of Vancouver and if you were to personify Gastown she would basically be Jessica Rabbit in a black dress.

The Road To The Sunshine Coast

Not exactly a 'neighbourhood' but with Sagittarius' go with the flow nature, anything is their 'neighbourhood'. Most likely to take a drive for the sake of taking a drive, Sagittarius would cruise up and down the sea to sky, they may even spontaneously end up on a ferry.

Lol. Okay, so before you even read this you know where it's headed. Capricorns have the drive to succeed and they don't stop until they have achieved their goals. (*cough* Mansion *cough*) I mean, Capricorn's keyword is "I use" and there is nothing more Shaughnessy than, "you take the Range Rover today, I'll use the Porche."

The original and inventive Aquarius is the epitome of Commercial Drive. They are humanitarians who are always trying to find ways to make this world a happier and safer place. So roll up a joint and join the drum circle of peace and love. We will heal the world one kumbaya at a time.

The little free spirits that are Pisces embody the West End vibe. They are motivated by their emotions which would explain all the carefree rollerblading around English Bay with headphones blasting old school Britney and a perma smile beaming off their faces.

Four different agencies all got involved.

A recent trip gone awry by a group of 30 paddleboarders in Vancouver is a great reminder to always double-check the weather before leaving land.

Seventeen of the paddleboarders needed rescuing after strong winds and surf pushed them astray near Lions Gate Bridge on Monday, September 6, according to a news release from the Vancouver Police Department.

The reversal was made just a few days after their decision went public.

Beverly MacDonald, a spokesperson for the Greater Toronto Airports Authority, told Narcity that Toronto Pearson has come to the conclusion that separating vaccinated and non/partially-vaccinated travellers in different lines has a minimal effect on operational efficiency.

Torontonians are eyeing trips to Las Vegas and NYC. ✈️

If you're looking to add to your post-pandemic vacation bucket list, new data has revealed what the top travel destinations in the U.S. are for people in six major Canadian cities.

Perfect for the beating the summer heat. 🌞

If you're looking for a way to beat the heat in B.C. this month, parks in Vancouver are now offering a boozy alternative to staying cool with water.

The City of Vancouver is starting a pilot project that allows the use of alcohol in certain parts of 22 of Vancouver's most popular parks, beginning on July 12 and ending on October 11.