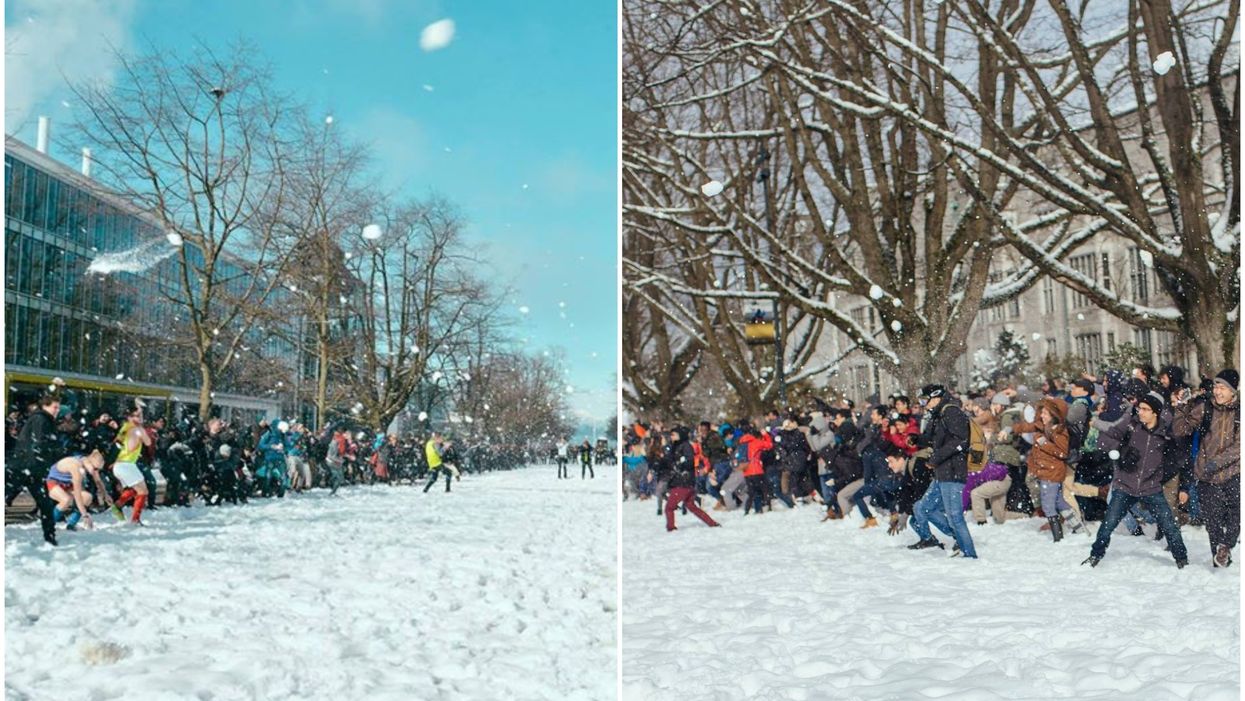 In the midst of the brutal winter, Canadians are proving time and time again that snow is not going to stop them from living their best lives. A Canadian university is having a massive campus-wide snowball fight today and the photos and videos will give you serious FOMO. Students at the University of British Columbia are making the most of the snowy weather in Vancouver by having a huge snowball fight on campus.

Vancouver has been hit with the most snow and cold weather it has seen in 10 years. Due to the surprising snowstorm, parts of the city were even shut down. So what better time for BC students to have a huge snowball fight across campus? The UBC Party Calendar, a student club at the University of British Columbia in Vancouver, hosted the "Campus Wide Snowball Fight 3.0" today on February 13.

It's not even the first time that this massive campus-wide snowball fight has taken place at UBC! The UBC Party Calendar has hosted their "Campus Wide Snowball Fight" for two years already, and 2019 marks the third year for this annual event.

The UBC Party Calendar posted about the event on Facebook. "Join the fierce fight on Main Mall alongside thousands of your fellow T-Birds as we come together for a snowy showdown," read the event description. "It’s your chance to rally against that person in lecture who states things in the form of questions or stand up to friends who steal your food from the fridge".

The massive snowball fight started today on February 13 at 12 PM at the University of British Columbia. On the Facebook event page, 1,600 people said that they were attending and 4,300 were interested in attending.

Check out footage from the event below! It's safe to say that the massive snowball fight was a major success. According to the UBC Party Calendar, around 3000 people participated.

According to their official Facebook page, the UBC Party Calendar is "a students for students social enterprise, focused on building community, promoting student culture and inspiring people to have fun and get involved at UBC. The Calendar is created and operated by UBC students".

To find out more about the UBC Party Calendar and to see what other events they are hosting, you can visit their official Facebook page. For more info on this year's "Campus Wide Snowball Fight 3.0", you can visit the Facebook event page.