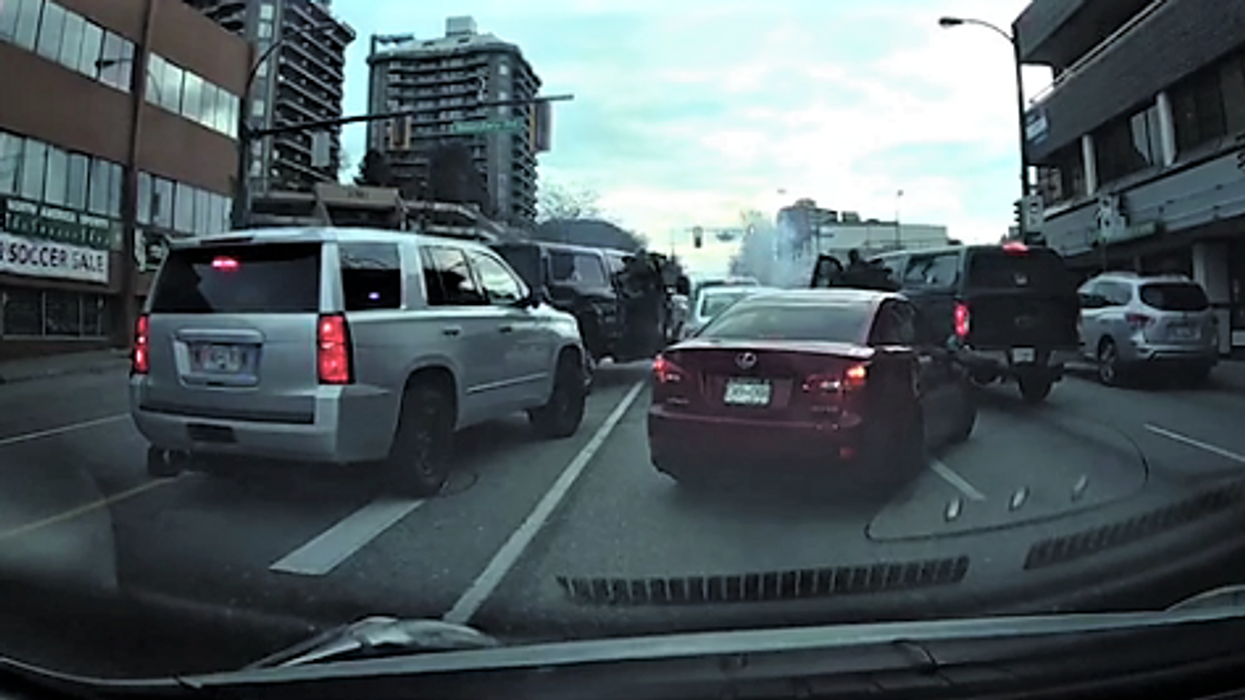 According to CTV News, the suspects were a 28-year-old man from Delta and a 21-year-old female from Pitt Meadows. The two suspects reportedly stole a vehicle earlier that day from a woman in her 40s in Richmond, BC. The pair allegedly stole the car violently by showing a weapon to the victim and using it to smash the car's window.

The suspect then fled in the vehicle leaving the victim behind, who was then admitted to the hospital. Two hours later, the stolen car was swarmed by police and the entire thing was caught on a driver's dashcam.

At the beginning of the video, you can see that the driver with the dash cam is patiently waiting to continue straight through the intersection. There's a line of cars stopped in front of the driver while they wait to proceed. Shortly after the light turns green, you can hear the driver ask others in the car, why the cars aren't moving forward.

Watch the full video shown above. This is when we discover that there's something going on with a particular vehicle closer to the intersection.

It's not long before one unmarked SUV pulls up alongside the lineup of vehicles angling itself so the stolen vehicle can't drive away. Quickly, two more unmarked SUVs pull up on either side of the vehicle.

The officers get out of their vehicles and seem to use a tactical explosive device similar to a flash-bang grenade to disorientate the suspects.

As soon as the flash-bang devices are fired, the dashcam driver quickly decides to drive away from the hectic scene. The video itself is shocking and shows how quickly events can turn.

While the driver notes in the video that it looked like tear gas bomb, Reddit users were quick to comment on the video by suggesting that the device used in the video seems to be similar to a "flash-bang" grenade, which is commonly used by police in the field. This device is often used by police to confuse and disorient a suspect during an intense capture.

One Redditor commented explaining that you can see a police officer throw the grenade device up into the air right before the first explosion is heard, similar to how you would use a flash-bang grenade.

CTV News reported that the two suspects were both arrested in connection to the stolen vehicle and were turned over to the Richmond RCMP.