They will never forget this encounter. 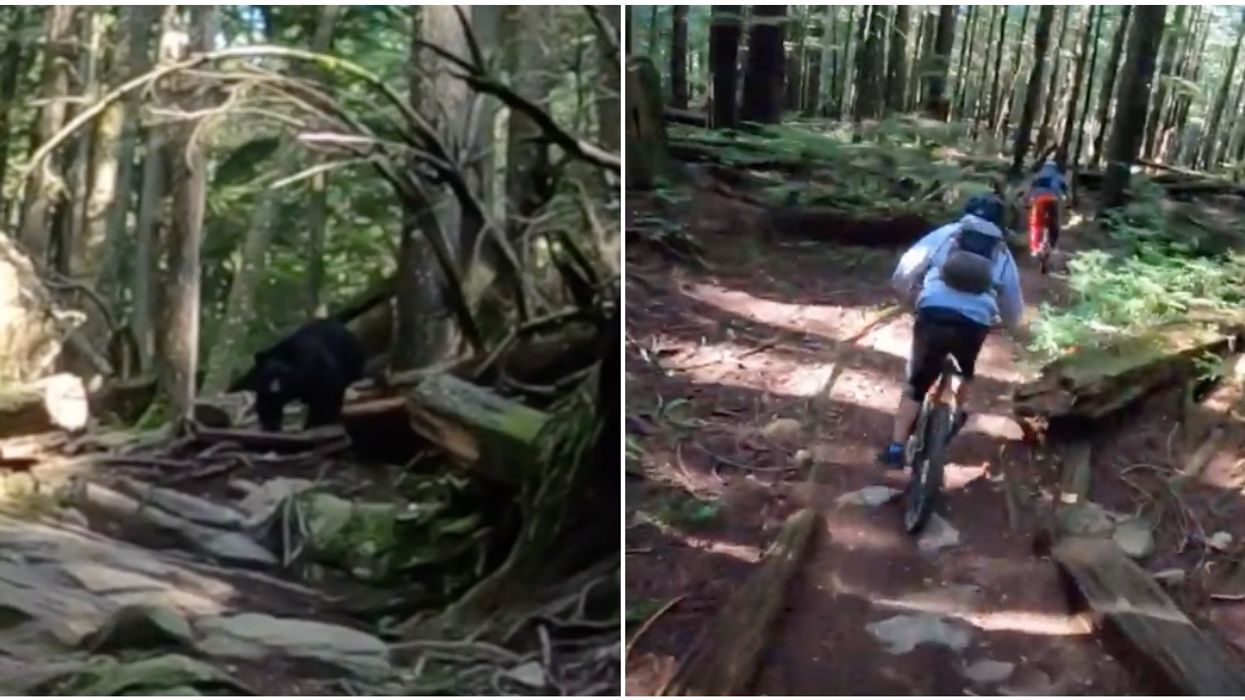 The latest terrifying incident involving a bear in B.C. was actually caught on camera. According to a video posted on Youtube, you can actually see a black bear chase B.C. bikers for 1 km just one week ago. The entire thing was miraculously caught on camera and the footage is insane. Here’s what happened.

According to the video, the intense chase took place on Seymour Mountain in North Vancouver on September 27, 2019. Brad Martyn was one of the riders who captured the footage.

Martyn spoke with CBC News about the incident. According to his story, he and his two friends first spotted the black bear off in the distance as they were descending from the black diamond TNT trail.

In the video, you can see a black speck in the distance that is the bear.

At the time, Martyn had a camera mounted on his helmet. For the duration of the descent, he turned it on.

The quick-thinking Martyn decided to put some space between his group of friends and the bear; so the group began travelling down the single track trail.

But instead of staying far back or leaving, the bear actually followed the trio of bikers. After some time, the bear even got closer, shocking Martyn and his friends.

Martyn recounted the terrifying encounter with CBC News. He stated that the bear was all of a sudden 30 feet closer and was running towards the pack of bikers.

But it gets even more intense.

According to Martyn, the bikers navigated their way through the trail for a couple more minutes before finally stopping. When they stopped, they saw the bear was only meters away at this point.

Martyn stated to CBC News that the bear had stalked them for over one kilometer. Narcity reached out to Brad Martyn for comment and will update this story.

In the video, you can hear Martyn and his friends in disbelief wondering why the bear was chasing them. The shock eventually turned to fear and the trio intensely biked down the path.

Martyn cuts in on the video to say that this was their first time on the trail and they did not know what was to be expected but because of the pressure of the bear they just had to go for it.

After realizing that the bear was still there, one of the friends suggested putting the bikes in front of them to make them look bigger.

They then start yelling and throwing rocks at the bear to scare him off. Eventually, it worked but not before the trio got the scare of their life.

This is just one scary bear incident that was caught on camera this year. Earlier this summer, a woman was out walking her dogs when she and her pets were stalked and attacked by a bear. She caught the entire thing on camera.

Bears have been showing no fear this year and one was even caught running right into a restaurant in Alberta. Another was caught climbing up onto a homeowner's patio in B.C.

If you happen to find yourself out in the wilderness, be mindful of your surroundings and always be prepared for the worst. Plus, if you're scared of bears, you should probably avoid this Alberta town that has the highest number of bear sightings in Canada.