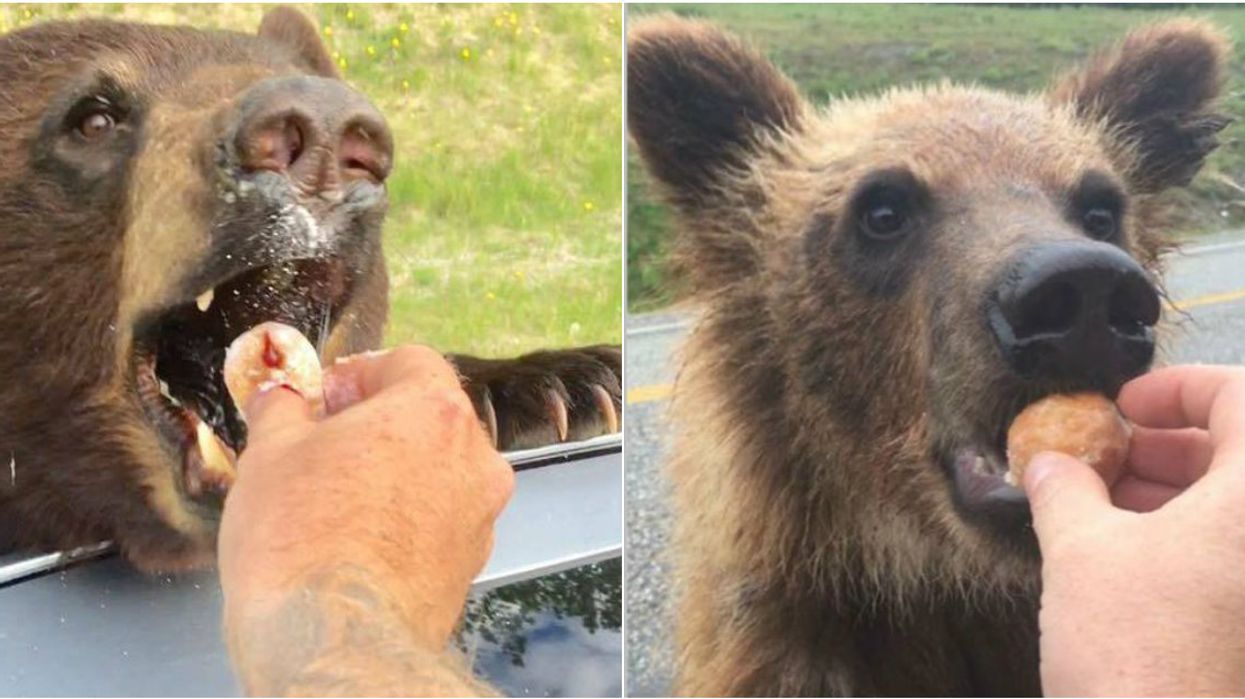 An investigation regarding British Columbia wildlife has finally come to a close after charges were laid in Victoria yesterday. The investigation has been active for over a year after questionable photos began circulating on social media.

The photos were involved in Facebook posts that showed a Canadian man feeding wild bears, yes like the maul you to death kind, thousands of Tim Horton's Timbits in the summer of 2017.

READ ALSO: It's Official, Vancouver Has The Most Expensive Gas In All Of Canada And The Price Is Shocking

During the summer of 2017, the Peace BCCOS received complaints regarding individuals posting pictures on social media of bears being unlawfully fed. Today charges were laid concerning the matter and as a result two individuals are scheduled to appear in Ft Nelson Court on Nov 5. pic.twitter.com/MzZ0L0senX

BC's Conservation Officer Service posted to both Facebook and Twitter about a new arrest in the case. Two people from Victoria, BC were charged with unlawfully feeding the wild animals.

READ ALSO: A Man Trashed A BC Tim Hortons After His Iced Capp Was Made Wrong (VIDEO)

Both Randy Scott and Megan Hiltz are facing one count of feeding or attempting to feed dangerous wildlife, according to court documents obtained by CTV Vancouver Island.

Considering Randy Scott has a profile picture on social media that shows a tattooed arm feeding a bear through a car window, it would be hard to deny those claims. The photo was uploaded on Facebook only 3 weeks ago and shows the wild animal eating a Tim Horton's powdered sugar and jelly-filled Timbit.

According to CTV, Scott also has a record from dangerous driving on two occasions in the past. He was acquitted on dangerous driving charges back in 2013 after a video of motorcycle raising on Victoria Island gained thousands of views online but there failed to be enough evidence that Scott was racing at the time. He also had his Lamborghini seized by police after going double the speed limit on the Trans Canada Highway in Saanich.

It didn't take long for the story to be shared to Reddit and Canadians were quick to comment on how crazy it is to feed a wild bear. It's known that bears can get insanely aggressive when approached by humans and are typically very dangerous to meet in the wild.

While Redditors may have been harsh to Scott and Hiltz, they are not entirely in the wrong. In fact, one user had pointed out a similar situation unfolded nearby in Squamish, BC, that ultimately lead to the death of a bear that became dependent on humans for food.

The wild bear was killed on September 10th because its contact with humans had made it a risk to public safety, according to Conservation Officer Service and the District of Squamish.

READ ALSO: Canadian Man Assaulted A Cop Then Ran Away, Got Hit By A Truck, Kept Running And Still Managed To Get Caught (VIDEO)

When bears become habituated to humans or life in a populated area it makes them a risk. Due to the unpredictable nature that comes with close encounters with a wild animal they can really injure people or worse, kill someone. Because it is getting closure to winter there will be increased bear activity in BC. Bears are going to be fattening up meaning that they will be looking for food with more vigour.

To ensure that you do not attract bears in your area be sure to store garbage containing food indoors. It goes without saying that feeding a wild animal is reckless and considering that Timbits aren't normally a part of a bears diet (except maybe Pooh Bear) you should definitely not be feeding them to a wild bear.