The more you look, the weirder it gets. 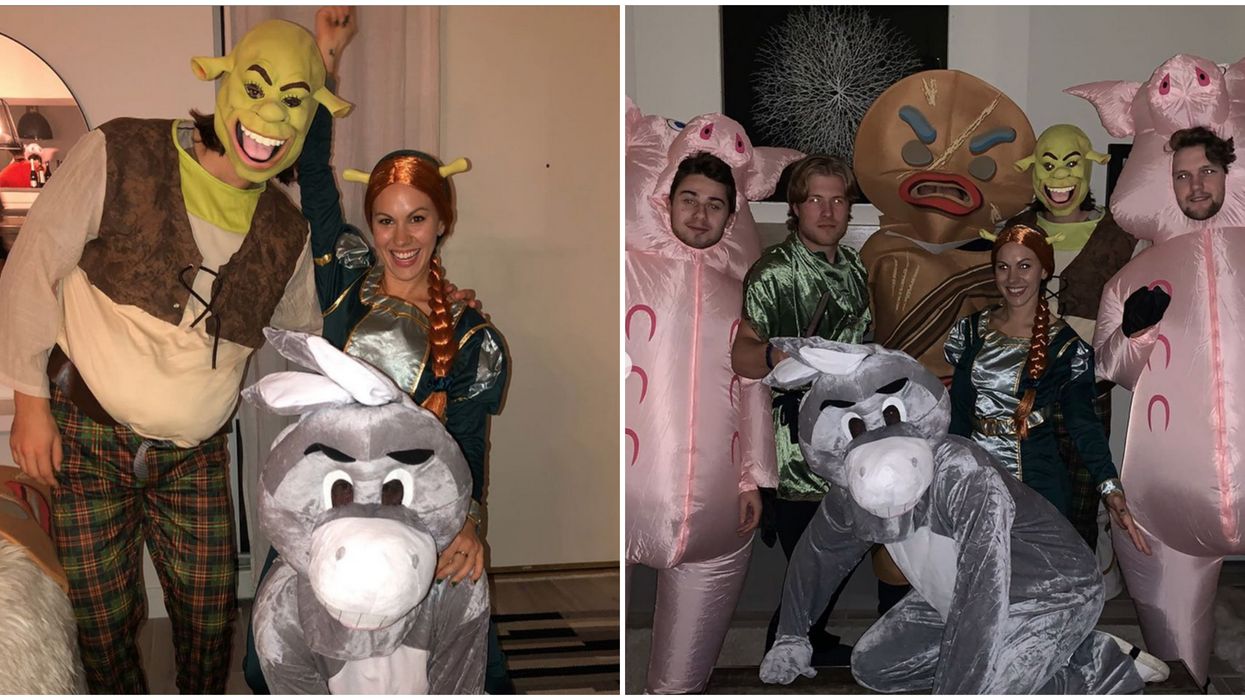 We've got some breaking sports-related news for you, Vancouver. Over the weekend six players from the Vancouver Canucks and one of their significant others teamed up for a Halloween costume. The group dressed up as the cast of Shrek. Naturally, the funny Vancouver Canucks costume got posted on most of their Instagram accounts and the posts are blowing up.  Though the effort was certainly cute, the result is pretty horrifying.

The group costume includes Elias Pettersson as Donkey, Brock Boeser as Lord Farquaad, Jake Virtanen as the gingerbread man, Quinn Hughes and Thatcher Demko as two of the three little pigs, and Christopher Tanev and his partner, Kendra as Shrek and Fiona. A photo of the squad has been in circulation and we just can't decide how we feel about it. What we believe to be a valliant effort at a decent group costume has turned into an unintentionally frightening Halloween horror.

For starters, the face of Christopher Tanev's Shrek costume is actually what nightmares are made of. It does not help that everyone who has their eyes visible in the photo is experiencing a serious case of redeye. For Shrek, the red light beams are all you can see emerging from his tiny eyeholes.

Don't even get us started on Jake Virtanen's gingerbread man. We know the little cookie goes through some serious trauma throughout the series, but there are plenty of times where he's an adorable, smiling, scar-free little guy that would make perfect, non-terrifying costumes.

Moving onto the donkey. In Elias Pettersson's post, he shares two photos, one with just Christopher and Kendra, and one with the whole group. In the first, he is squatting down on the ground and Fiona seems to be riding on his back. In the second, she has her hand outstretched as if she's about to spank him. A secret romance between donkey and Fiona? Who would have thought? All of this unfolding right under Shrek's nose.

To add a cherry to the top of all of the weirdness, each post was shared with a slightly different but equally unflattering filter. Though, we must say, some of the captions are pretty cute. Pettersson captioned his rendition of the photo "And in the morning... I’m makin waffles! #donkaë," Boeser captioned his "Donkayyyyyy,"  Demko went with "The cast of Shrek coming to you live from Duloc" followed by the pig emoji, and Virtanen captioned his with "Not the gumdrop #shrek."

Though we are delighted that the Vancouver Canucks are showing both team and Halloween spirit, we think they could have taken a slightly better photo or selected costumes that didn't have terrifying faces. We're looking forward to seeing if the rest of the team dresses up for Halloween later this week. Happy Halloween, Vancouver!