"It's like they are selling our futures for their comfort and profit." 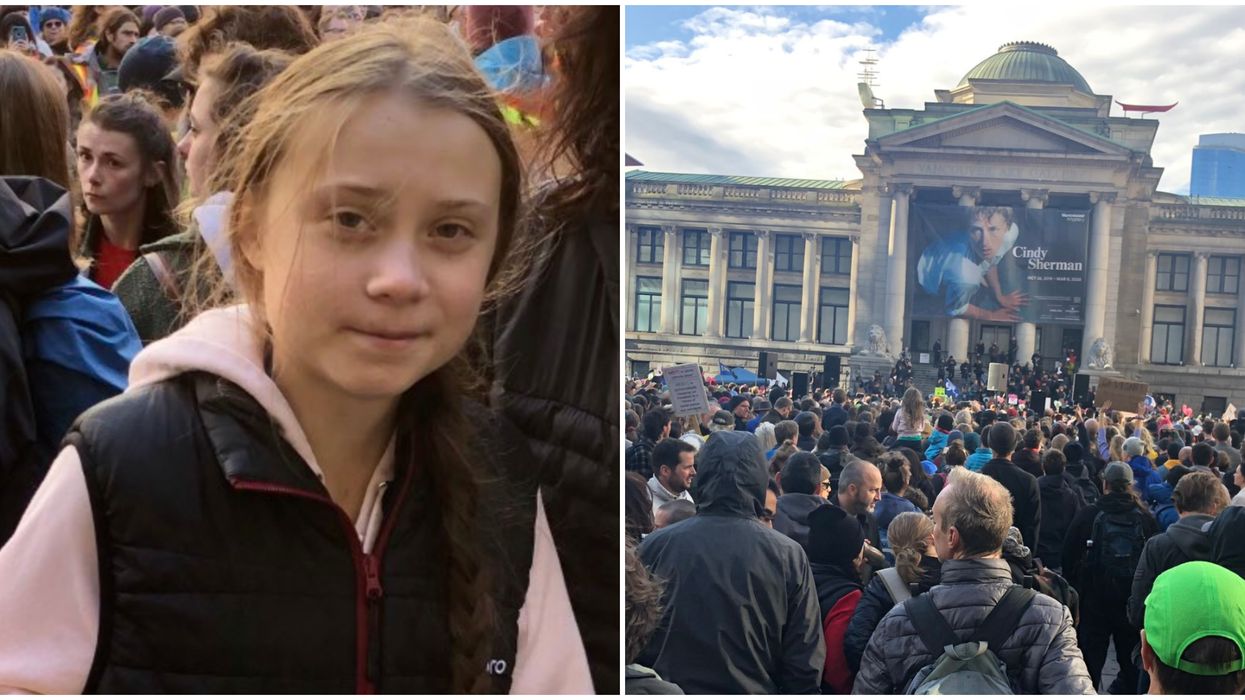 After a giant protest through the streets of downtown Vancouver on Friday, October 25, thousands have gathered outside of the city's art gallery to hear Greta Thunberg's Vancouver climate strike speech. 16-year-old Thunberg is a seasoned pro by now, having given dozens of similar speeches at 60 climate rallies so far. Thunberg is the young leader behind Fridays for Future, a worldwide climate action movement in which millions of people have participated.

Students, activists and even local politicians like Jodi Wilson-Raybould have all turned up to this Friday's event. Police were called in to keep the crowds under control. Before Thunberg, activists from Sustainabiliteens and local Indigenous organizations have taken the stage to speak in front of the crowd.

Thunberg began her speech by addressing the Indigenous land the protestors stand on, and the "brave young plaintiffs who are suing the government today." She also quoted and acknowledged the work of David Suzuki's daughter, Severn Cullis-Suzuki.

"Demanding a safe future for us and for everyone and together we will make a change," said Thunberg. She points out that global CO2 emissions have increased by 65% from 1992 to 2018. "If people would have listened back then, the world would be a completely different place than it is today. But the world ignored her, and world leaders continue to look away from this crisis even today," she continued.

"If world leaders would have started to take action back then when this crisis became known to them, then imagine the sufferings that could have been prevented," Thunberg said, calling it "shameful" that the crisis has been ignored. "It is 2019, and the people in power are still acting as if there is no tomorrow," she said, as cheers erupted in the crowd.

Thunberg went on - "We, young people, are telling them to stop doing that, to stop ignoring the consequences of their actions and inactions. The people in power need to start to realize what they are doing to future generations, to us,  and to people in parts of the world that are already suffering from the ecological crisis."

"If the adults really loved us, they would do everything they possibly could to ensure that we had a safe future, a future to look forward to. But, they are not doing that. It feels like they are doing the exact opposite."

Change is coming whether you like it or not — the crowd here at the Vancouver Art Gallery roars as climate activist… https://t.co/zlAl6fEy9M
— Martin MacMahon (@Martin MacMahon)1572039611.0

"They are so afraid of being unpopular and for making uncomfortable decisions. It's like they are selling our futures for their comfort and profit. And yet, they have the nerve to look us in the eyes and say that they are doing enough. Well, whatever they are doing, they are doing it wrong."

"We are starting to see through their lies and we will hold them accountable for their actions. We will be a constant reminder that they are failing."

Thunberg ended the speech by once again, addressing the criticism surrounding the movement. "We are not just skipping school or some adults who are not going to work. We are waves of change, and together we are unstoppable."

Her speech ended on a powerful note, and applause rippled through the crowd as she made her closing remarks. "We will make world leaders act. We can and we will. And if you feel threatened by that, then I have  some very bad news for you. This is just the beginning. We will continue. Because change is coming whether you like it or not."

Last week in Edmonton, Thunberg gave a rousing speech after a tense climate rally. Oil and gas counter-protestors crashed the event, making Edmonton Canada's battleground for climate change. Days later, a mural of Greta Thunberg was defaced in Edmonton with a slur and pro-oil messaging. Particularly in Alberta, it's clear that not everybody supports the impact that Thunberg has made on climate activism in Canada.

Thunberg's activism has earned her a spot on TIME's top 100 most influential people of 2019 and a nomination for the Nobel Peace Prize.