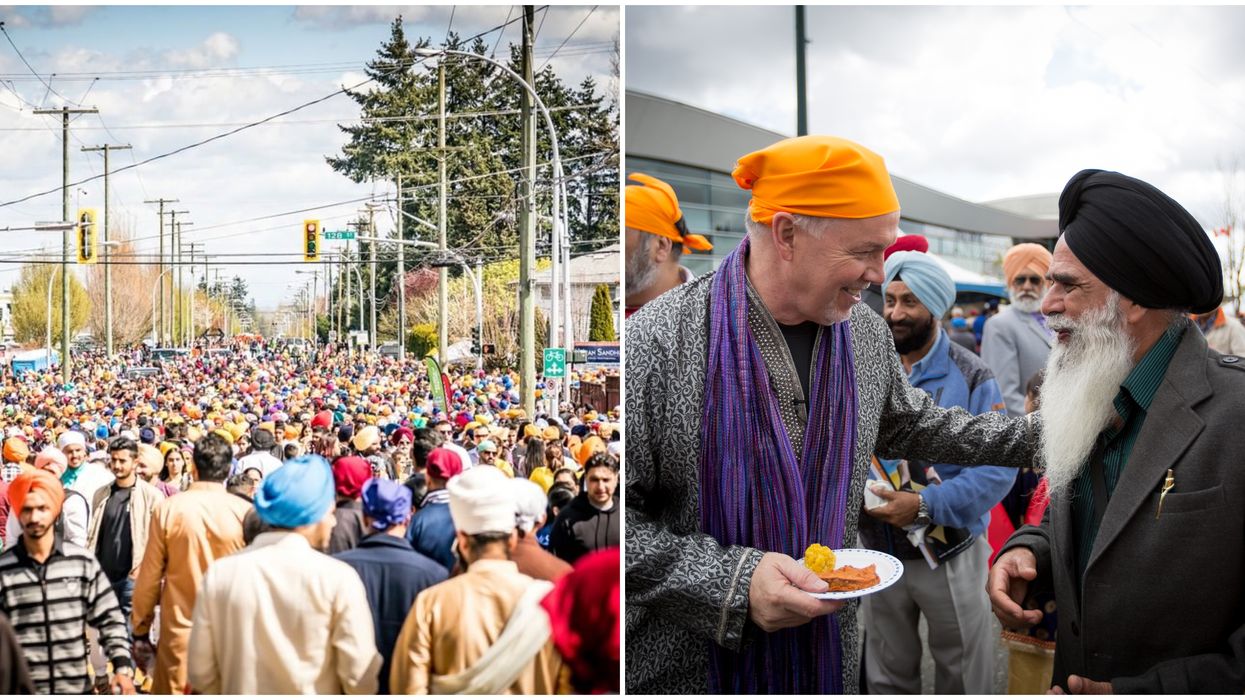 We always like a good spring festival but we love a spring festival that gives us free food and tons of entertainment. Surrey's Vaisakhi Parade 2020 will return on Saturday, April 25 and they will be offering delicious Indian snacks and street food to attendees. This annual community-based event celebrates the Sikh holiday of Vaisakhi, which is Punjabi New Year.

UPDATE: Surrey's Vaisakhi Parade 2020 has been cancelled amidst the COVID-19 pandemic.

EARLIER: Narcity spoke to Laura Ballance, a spokesperson for the Vaisakhi Parade in Surrey, who gave us the scoop on what locals can expect on April 25. "[The parade] starts and ends at the Darbar Dasmesh Gurdwara," she said.

The spring festival will begin and end at the gurdwara on 128 Street. You can check out the parade map on the event's official website and plan out your place ahead of time.

Seeing how the event is set to draw over 500,000 people throughout its scheduled time from 9 a.m. to 5 p.m., it's best to just come in early and grab comfortable spots with fantastic views of the streets.

"It's a religious parade," said Ballance. "It would be similar to Easter in the Christian calendar. All of the participants are community-based. The main float in the parade is the one that carries the religious document."

Ballance added that a lot of Sikh school students will be involved, presenting their traditional martial arts and games as they march through the streets.

The street food will be handed out at the booths lined up by the streets. The event organizer confirmed the food given out will be primarily Punjabi, so we can expect traditional Punjabi sweets and Indian delicacies.*

In recent years, they have also directed their efforts into including healthier dishes. Parade booths will also be handing out apples, juice boxes and other snacks, in case you're looking for something a bit healthier.

CTV News gives us a glimpse of how crazy the parade got last year, so it seems like people from Surrey and beyond surely have a blast at this fascinating spring parade. We understand the excitement, especially when there is free food and wonderful cultural displays involved.

"With the number of people that come to these parades, it takes a while for it to go through," said Ballance.

So chances are, you will have plenty of time to experience the whole parade without worrying about missing out on anything.

The parade has been happening in Surrey for over twenty years, as this will be their 21st annual celebration. It rates as one of the largest Vaisakhi parades outside of India, with last year's event bringing out over half a million people.

According to their website, the provisions of free food and drinks relates back to the origins of the festival, as it "pays tribute to the harvest celebration roots of the parade".

This is only one of many must-see events this coming spring. Let the spring festivities commence.

Why You Need To Go: If you want to have the best Indian delicacies for free and see exciting Sikh cultural presentations, you know just where to go this April.