The plane hit a flock of geese and had to turn back. 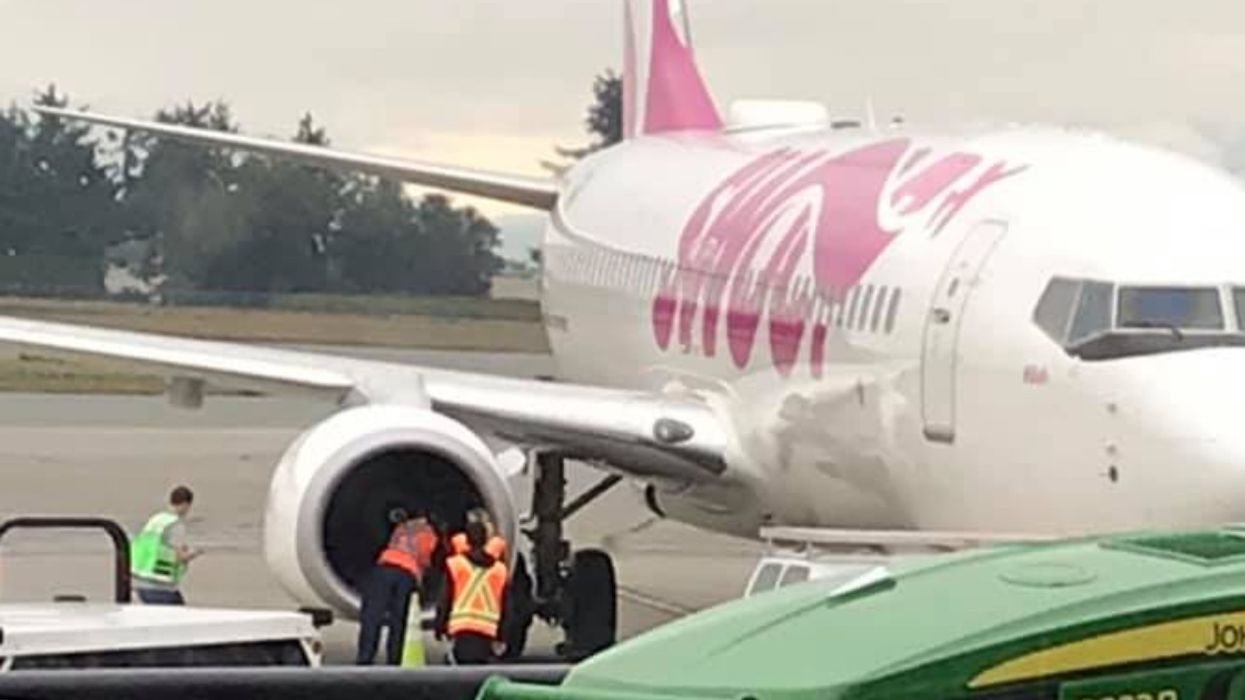 People onboard a Swoop airline this morning got the scare of their life when a Swoop flight made an emergency landing in Abbotsford after hitting a flock of geese mid-air. The incident took place at around 8 a.m. on Tuesday, Sept. 10. Passengers were left shaken and posting their experiences on social media. Unfortunately, this is not the first time Swoop has made headlines in recent weeks for similar situations.

Flight number 312 originally departed from Abbotsford at 8:07 a.m. on and was headed towards Edmonton. The Boeing 737 aircraft was carrying 100 people at the time and was expected to land in Alberta at 12:21 p.m. local time.

What started off as a normal flight quickly turned scary when the plane was forced to turn back shortly after takeoff.

According to a tweet released by the Abbotsford airport, the Swoop plane was forced to make an emergency landing in the B.C. city after allegedly hitting a flock of geese. It is unknown how many geese the Boeing hit, but sources say you could hear the impact.

While everyone is reported to be safe and sound, it was a terrifying event. One woman has spoken to Narcity about her experience.

According to a Facebook post by Donna-Lee Rayner, all was well when she and 99 other people boarded the plane.

After takeoff, Rayner recounts hearing a sudden and loud “thud” that occurred several times. That is when the cabin filled with smoke. Rayner said she could smell burning.

There was a birdstrike at YXX - the Aircraft has landed safely passengers have been offloaded into the terminal saf… https://t.co/jyW3bU7eky
— Abbotsford Airport (@Abbotsford Airport)1568131354.0

Rayner told Narcity in an interview that she was calm during the entire incident. She even started to type goodbye messages to her children and parents on her phone in case something happened and it was recovered from the crash.

That is when Rayner heard the intercom say, "One of the engines sucked up some geese and the smell was them, well, getting cooked, we are currently down one engine so we are turning around back to Abbotsford.”

The pilot landed the plane safely back in Abbotsford. Now, Rayner and the rest of the passengers are stuck in the airport until the next departing flight at 8 p.m.

According to Rayner, she will be departing tonight, but Swoop is also offering flights for tomorrow or the next day. In the meantime, no accommodations have been given to the passengers.

Rayner is unsure if she will be flying with Swoop again. “I’ll see how they treat us during the waiting process. However, it isn’t Swoop's fault that the geese chose their plane,” said Rayner.

Although she was safely returned to the ground, Rayner is afraid to get back onto a plane. Prior to this happening, she was always nervous about flying and turbulence scared her.

“Turbulence is no fun but knowing while you’re [taking off] that something is clearly wrong... smoke starts to float through the cabin and [there's a] smell of burning in the air. It was absolutely terrifying yet I was unbelievably calm,” explained Rayner.

This is not the first time Swoop has made headlines for conducting an unexpected emergency landing. Just four days ago, a Swoop plane was forced to make an emergency landing after someone lit a cigarette on board.