The Subway Secret Menu You Gotta Order ASAP In Vancouver

Celebrate your city the right way. 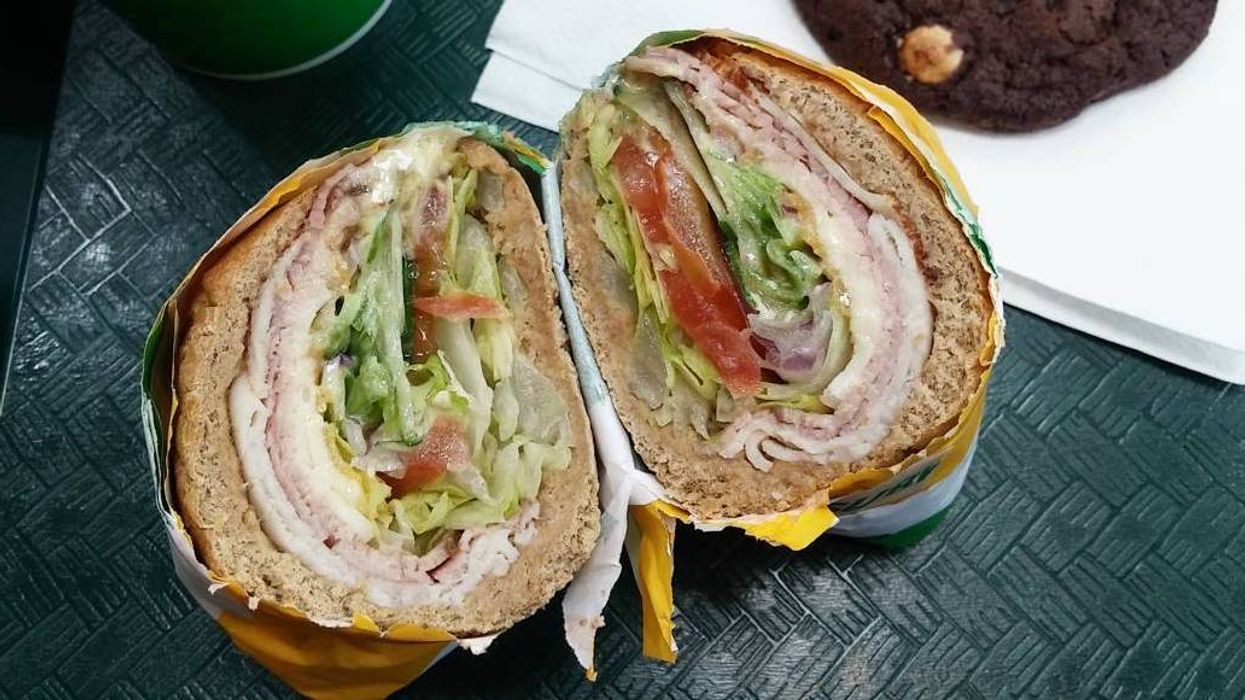 Straight up, there's nothing on this earth that hits the spot quite like a Subway sandwich does.

I mean, tasty meats, melty cheeses and crispy veggies, all conveniently rolled together and smothered in one of their awesome sauces? Um. Yes please.

But while the standard Subway subs are a staple of deliciousness in everyone's life (that Steak and Cheese though), it's possible that you might want to try something extra tasty from Subway. Something that's not quite on the menu.

The beauty of Subway is that you can totally customize your own sandwich. While the sandwiches on the menu are great, they're more like fantastic suggestions than anything else - so if you want to add bacon, chicken, extra pickles and TWO types of sauce, then go for it. The world is your oyster... or sub sandwich.

Plus, as an added bonus? This year, Subway participated in World Sandwich Day on November 3rd and was able to donate a staggering 1,000,000 meals to Canadians in need.

All you have to do is ask your Subway Sandwich Artist to add an additional $1 (or however much you want) to your bill, and 100% of that will be donated to BC Food Banks. So your sandwich won't just taste special, it'll also do some good!

Now, if you’re wondering where exactly to start your new and delicious Subway sandwich adventure, then don’t worry. These "secret Subway menu" items are perfect places to start - just don't forget to order it by item and not by name, so you don't confuse the Sandwich Artist who'll create your masterpiece!

This secret Subway sandwich is basically every meat-lover's dream come true. PACKED with meat, cheese, sauce and veggies, this sandwich is huge on flavour. It'll keep you nice and full, so it's the perfect thing to pack for a picnic the next time you're trekking out to Stanley Park.

- Ask for extra steak and extra cheese (you can pick your own cheese, but Monteray cheddar is usually the best!)

Foodies of Vancouver, I don't even need to tell you about Fraserhood. Lately, this neighbourhood - about a 20 minute drive away from Gastown - has really blown up in terms of delicious food options and trendy spots. This Subway menu hack, reminiscent of a thin-crust pizza in sub form, is simple and ingenious, just like the culinary options of this trendy Vancouver neighbourhood!

- Start with a toasted Meatball Marinara sub on Italian bread, but have them scoop the inside of the bread out first

- Pick your cheese (for this one, try sticking with mozzarella if it's offered - if it's not, go with Monteray cheddar)

- Slap in the veggies you love (for this, green peppers, red onions and black olives are recommended)

Gastown is quite possibly Vancouver's most fun neighbourhood. Okay, maybe it's not the most fun, but it's up there - and anyone who's ever visited this super trendy borough knows exactly why. Gastown's electric vibe and trendy restaurants deserve a unique sub that's refined, but also just as fun to eat as it is delicious!

- Add extra cheese (any cheese is good, but if they have pepperjack, go with that!)

- Add in your favourite veggies and a good amount of the sauce of your choice (although ranch sauce is recommended, a good substitution is their Chipotle Southwest sauce!)

- Sprinkle on some salt and pepper

- Wrap that sub up and enjoy!

Since Yaletown is all about taking the old and sprucing it up, this reinvented, Subway-style take on the typical Philly Cheesesteak is the perfect way to pay a little homage to this popular Vancouver neighbourhood!

- Start with a Steak and Cheese sub on Italian bread

- Ask for extra cheese, and use American cheese AND Mozzarella (if that's unavailable, substitute with Monteray cheddar)

- For veggies, stick with red onions and green peppers (and banana peppers if you want an extra kick!), and THEN get the whole thing toasted

- Then add your favourite sauce, but for this Sweet Onion might work best

- Prepare to be blown away by deliciousness!

This shoreside downtown Vancouver area features a marina, beautiful views, and an overall emphasis on the beauty of Vancouver's bodies of water. Naturally, the best way to represent this glorious neighbourhood is with Subway's signature Tuna sub - except with a totally customizable and melty twist!

- Start with Subway's Tuna sub on your favourite Subway bread

- Add your favourite cheese (helpful hint: provolone is AWESOME for this, but if not, Monteray cheddar cheese will do fine!)

- Add in some mayo and salt and pepper

At this stage in the game, "Kitsilano" is pretty much synonymous with awesome vegetarian spots - so it only makes sense that this Subway secret menu item, reminiscent of a delicious Banh-Mi (but with a Subway twist) and stuffed with vegetables and ALL. THE. CHEESE. would be named after one of Vancouver's most famous veggie neighbourhoods!

- Start with your favourite Subway bread (but Italian would work best!)

- Pick your favourite vegetables, but don't skimp out on the red onions, pickles, spinach and cucumbers. If available, add in some carrots and avocado (for appropriate mouthfeel) as well

- Add Monteray cheddar cheese and Swiss if it's available

It's actually super easy to customize your Subway sandwich... all you basically have to do is walk into any Subway, and tell the Sandwich Artist exactly what you want PLUS you get to help make sure someone in BC gets a fresh meal! Sounds like a huge win-win, TBH!!

And although these Vancouver-esque subs are sure to be delicious, you can pretty much get yourself to any Subway and create your own work of sandwich art!