Literally wherever you are in the city. 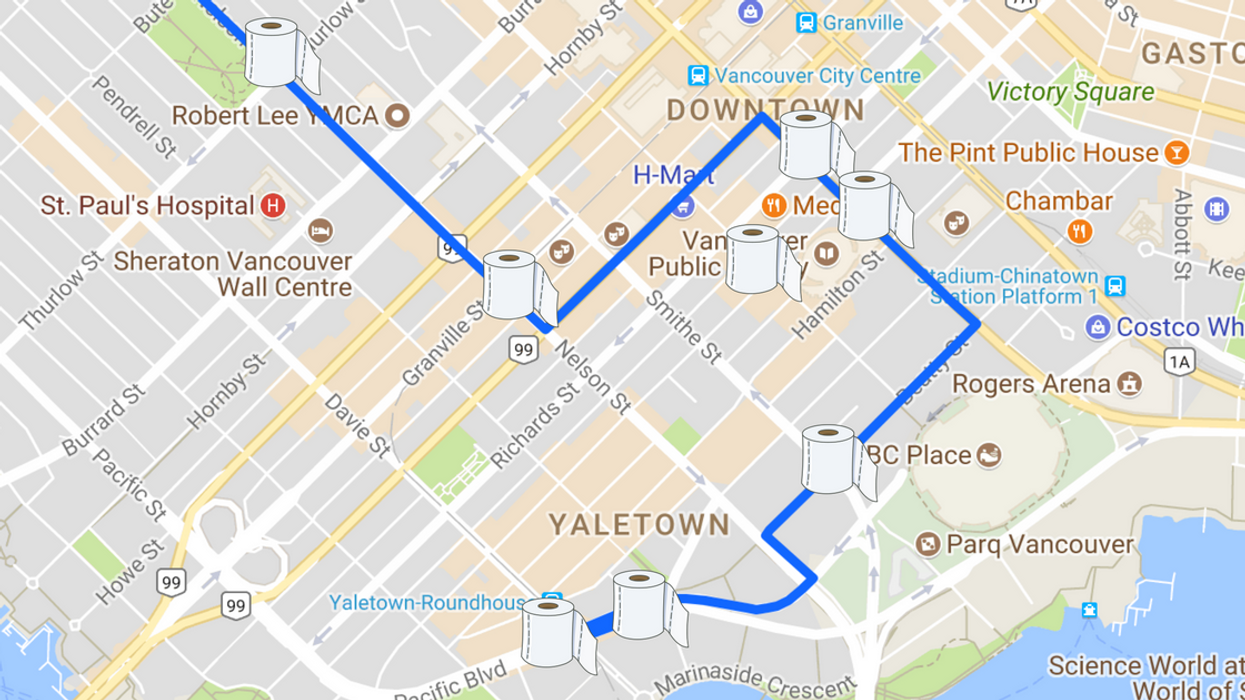 Let's be honest for a minute here: there's nothing on this earth that's worse than needing to go without one single solitary washroom in sight.

It can be an inconvenience - especially if nature calls when you're riding the SkyTrain, on your way to someplace important, or just generally have no clue where the closest washroom to you is located.

And if you're someone who has needs a washroom frequently? Well, you already know the struggle. Finding a public washroom in Vancouver, or at least a spot that'll let you use their washroom without having to buy something first, is high key difficult.

But a new app is out that's trying to make it easy for people to access public washrooms, wherever they are in Vancouver! GoHere is an interactive washroom finder developed by Crohn’s and Colitis Canada. It just launched across the country and the charity is asking businesses to sign on and open their washrooms to people in need. Basically, they need support from brick and mortar store owners to make it a success. And who wouldn’t want to support such a cause?

So, if you're chilling in Stanley Park and you seriously gotta go, but don't know where? No worries. They want to make it easy for you. Pop open the GoHere app, and it'll let you know right away. Jogging to work and you have to find a washroom, like, NOW? Tap that GoHere and find sweet relief.

And trust, the GoHere app is seriously dedicated to making public washrooms easier for everyone to access.

According to UBC student Matthew Sebastiani, who has ulcerative colitis, living with Crohn's or colitis can be challenging. Flare-ups of the diseases can cause internal bleeding and intense abdominal cramps. It can get so bad that waking up multiple times a night to RUSH to the washroom is common - as is super low levels of iron leading to exhaustion, using the washroom more than a dozen times in a day, being way too anxious to leave the house, intense abdominal cramps and just basically feeling taxed emotionally and physically.

Chances are very good that you might know at least one person living with Crohn's or colitis, as a quarter of a million Canadians live with the chronic diseases (!!). According to Sebastiani, Crohn's and colitis "are invisible autoimmune diseases that you may never know someone actually has."

Another reason why Crohn's and colitis aren't that widely known? Sebastiani, who is also Vice President of Crohn's and Colitis Canada's Vancouver Chapter, says it's because it's "still a social taboo, where people who have it might not feel comfortable speaking about it."

Though the diseases are not yet fully understood by doctors (despite Canada having one of the highest rates), it's commonly known that stress and diet can play a part in flare-ups. That's why, for his part, Sebastiani pays special attention to his diet, and avoids eating out as much as he possibly can.

Honestly, living with any disease is a serious challenge - but one that limits your life, and always has you second guessing whether or not you can leave your own home for fear of not being close to a washroom? That's extra difficult.

Which is exactly why the GoHere app is so important. It's much more than just a convenient app that lets you find the closest available washroom, it allows you to add new locations yourself and comment on existing spots. Businesses can make their washrooms accessible by emailing gohere@crohnsandcolitis.ca.

GoHere is available for iPhone, Android, and Blackberry TouchScreen. To learn more about the GoHere app and Crohn's and Colitis Canada, check out their website!