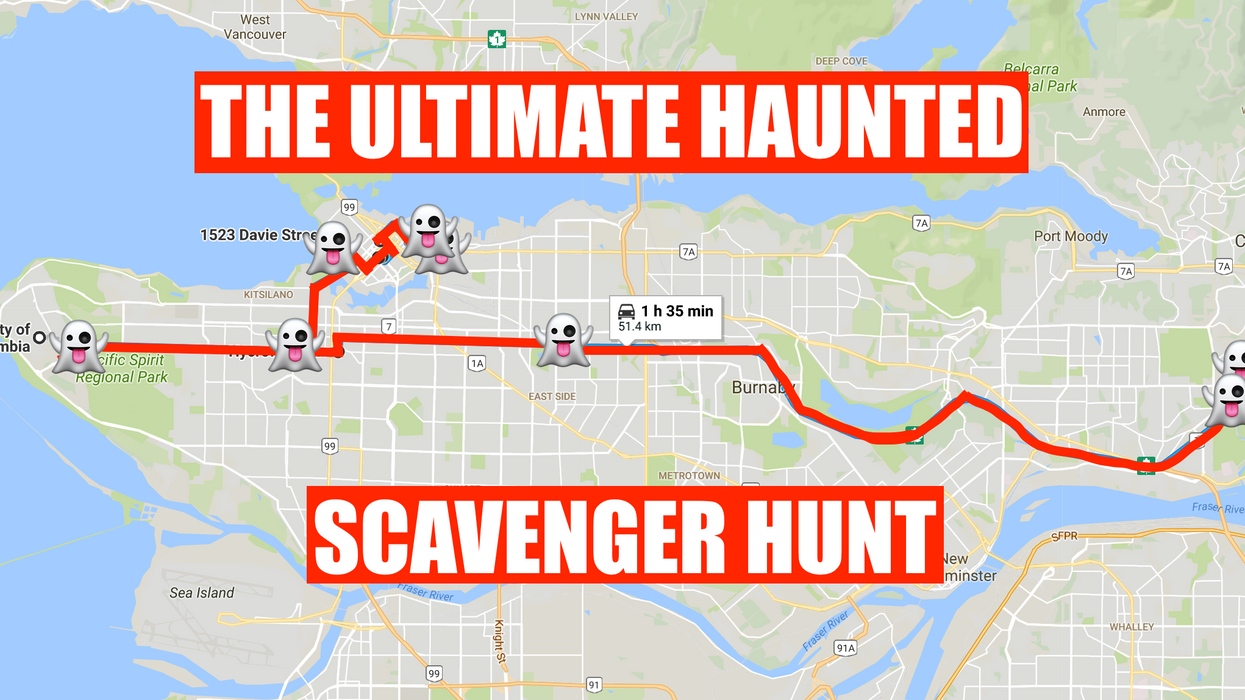 Get ready for the most terrifying month of your life. October is the perfect time of the year, the leaves are falling, goblins and ghouls are out and about. There are houses popping up all over the city that are specifically designed to horrify you and your friends. During any other time of year this would be a troubling thought, but not during October!

Do you enjoy Halloween but you're not into paying a ton of money for a one-time costume, nor do you like big extravagant parties? Then this is the perfect list for you. My favourite way to celebrate Halloween is by getting the whole crew together for a terrifying haunt. What could be more celebratory than exploring the creepiest places that Vancouver has to offer?

If you're anything like me, then you consider yourself to be a horror film aficionado, which means nothing seems to scare you. You laugh in the face of danger. Perhaps, you even like to scare your friends too. Then drag your friends along on this ultimate haunted scavenger hunt in Vancouver and scare the crap out of them. Who knows, maybe one of these places will even scare a professional, like yourself?

Legend: Legend suspects that Benjamin Rogers, the man who built the house is the ghost that lurks at the Gabriola mansion. In recent years, after converting the house into a restaurant, cutlery was seen levitating in the air, and last year the body of a murdered student was found inside the home. Talk about terrifying.

Legend: Located in one of the oldest buildings in the city, this store has to be haunted. Salmagundi West employees can't even explain the creepy things that often happen in the store.

Legend: There is a dark haired ghost that can be found throughout the Vogue theatre. His ghost is known by the theatre's workers. He has been seen in the sound booth, backstage and there's even a creepy corridor named after him.

Legend: The Hycroft Manor was built for war hero General Alexander Duncan McRae. After passing away, his ghost still lingers the manor's halls. But that's not all, apparently, there are six other ghosts that haunt this house as well!

Legend: This closed down psychiatric hospital is one of the most well known haunted buildings in Vancouver. The decaying building alone is so creepy that visitors don't dare to step inside. If that's not enough to deter you, then the infamous ghosts of passed patients will.

Legend: This museum creates creepy displays that highlight Vancouver's killers, crimes, and our most famous unsolved murder cases... Through the museum, you can even access the city's former morgue and autopsy room. Some say that those rooms are even haunted.

7. Streets of Gastown at night

Legend: Gastown is home to some of the oldest buildings in Vancouver. Famously haunted stores and restaurants like Salmagundi West and The Old Spaghetti Factory are reason enough that Gastown is definitely haunted. Some people say they have even seen ghosts walking the streets at night.

Legend: Waterfront Station is one of the most haunted buildings in all of Vancouver. People say that the security guards that work night patrol often quit because there have been so many freaky paranormal experiences during their late shifts.

Legend: A few years back Vancouver went crazy when a picture of The Hotel Vancouver's ghost aka the Lady in Red surfaced on the internet. The resident ghost is well known to the hotel staff and say that she lives on the 14th floor.

Legend: There are three well-known ghosts that haunt the Orpheum theatre. The first is an acrobat who is said to have died while performing years ago. The second one is a male bathroom attendant who is usually found in the downstairs men's washroom. The third is a well-dressed lady who appears on the balcony clapping after shows that didn't actually happen.

Legend: There is a conductor who sits in the trolley inside the Old Spaghetti Factory. The ghost conductor is infamous among the restaurant's workers. You won't find me working after closing.

Legend: Years ago on a dark and stormy night, there was a young girl who was stranded on University Blvd. She was hitchhiking when an unexpecting car struck her! Now, every once in a while you can find her ghost looking for a ride on University Blvd on a cold rainy night.