I think I'll pass on the Molson Canadian, thanks though. 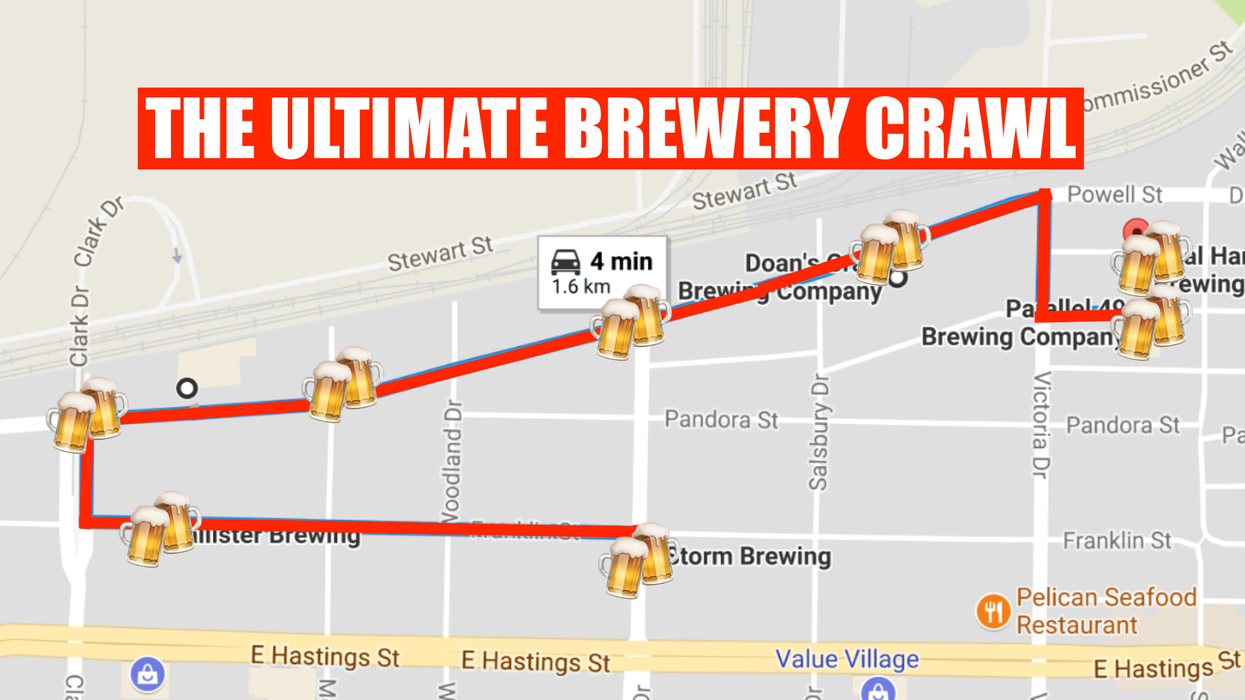 Let's talk more about how great Vancouver is. How about the absolute emergence and boom of the craft brewery scene? Seriously, it seems like there's almost one on every corner nowadays. With a number of new and preexisting breweries to choose from, there's no better time to get into the scene than now.

READ ALSO: This Map Will Take You On The Most Epic Vancouver Summer Bar Crawl

Maybe you've never tried craft beer before, or perhaps you don't know what's so great about it? Craft Beer is an awesome way to try new and unique flavors. From a coconut chocolate porter to a strawberry wit ale, anything is game. Not to mention that it's brewed here in Vancouver and supports local businesses (whooo!). Oh, and did we mention flights can be surprisingly cheap?

Check out this brewery crawl on Powell Street and let us convince you why it should be your next destination on a Friday night (or any night, we don't judge).

Storm Brewing has the distinction of being the oldest craft brewery in Vancouver, as well as one that's renowned famously worldwide. It's a gritty, funky spot with an awesome selection of both beer and cocktails.

Callister also claims to be the first of its kind in Canada - a co-working brewery that supports a number of smaller brewers. Up to bat this year are Boombox Brewing, Real Cask, and Lightheart Brewing. We highly recommend the "Hastings Sunrise" Strawberry Rhubarb Wheat Ale.

PSCB is well known for creating awesome beers to cater to both a seasoned enthusiast and a newbie alike. Alongside their rotating selection, be sure to keep an eye out for their single batch beers and their collaboration

Andina gets real unique by blending flavours of South America with British Columbia. The result are a mild ale, kolsch, IPA and Pale Ale that are unlike any other. Just look for the bright yellow building!

Doan's is a cozy, charming brewery that's been family run since its opening. Along with their vegan and vegetarian snacks, their tasting room allows you to enjoy a pint in an almost cafe-like setting.

A funky decor and vibe that matches their flavour: beer with attitude. The loud colours will draw you in and the taste will lock you down. Highly recommended is the "Ruby Tears" Northwest Red Ale.

Am I the only one who thinks sunrise Guava sounds unreal? And definitely unique as far as flavours go. Coal Harbour can be found on tap all across the lower mainland and they're boasting a killer porter right now.

These breweries had to be mentioned. They're in the same area, and some equally as good (or better), but sadly they're not in the same distance like the other ones. That said, if you're willing to split for a cab, you will not be disappointed.

Postmark takes a craft brewery experience to an entirely new level with their large dining and tasting area. Highly recommended are their raspberry and their blonde ale (though they also have wine!).

Their beer isn't just great, it's.... off the rail! Hah. Get it. Seriously though, try their "Into the Black" Oatmeal Stout, or for summer - their "Beez Kneez Honey Ginger".